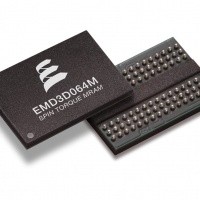 NEWS
Everspin become the first to ship ST-MRAM, is capable of being 500x faster than SSDs

Everspin offer up ST-MRAM, are the first on the market with it, and offers up to 500x the speed of S.

Strontium looks to lift your computing experience with the new low-cost HAWK Series. This is the first time we've published a SandForce based drive with Hynix 26nm flash. This is also our first public...

We went to the other side of the planet Earth to bring this review of the Zalman F1 to you today. Unlike many of the other SandForce based SSDs on the market today, the Zalman F1 still uses 3.3.2 firmware...

It's like the full size model, only thinner and a little faster. Check out our first SSD review from DMS.

Kingston is fully embracing SandForce and the most impressive controller at this time is getting the top to bottom treatment.

RunCore enters the SATA III market with a SandForce SF-2281 controlled drive, but chose asynchronous flash for this round.

Fitting in between the Pyro and Wildfire, the Pyro SE balances performance, longevity and cost like a Globetrotter with a basketball.

OCZ SSDs on special at Newegg, 15-percent off.

With drives on e-tail warehouse shelves, it's finally time to take a look at the full retail OCZ Vertex 3 120GB.

Apacer delivers one of the best SandForce SF-1200 packages we've seen to date, but does its performance compete with the competition?

OCZ takes it to the next level with a new 3.5" form factor SandForce SSD designed to be the ultimate desktop SSD.

Intel mixes flash to match other SSD manufacturer's capacity, but is it too late for Postville to compete with SandForce or is the new 120GB X25-M the perfect holiday SSD?

Team has a loyal following of enthusiasts who prefer their memory over all others. Did Team give the enthusiast community a SSD to get fanatical over as well?

Chris can spot a hot deal on an SSD from a mile away. This week Mushkin takes top honors with a Deluxe drive that features extended capacity and high IOPS programming.

G.Skill is looking to get back on track with their new 4K High IOPS Phoenix Pro that could be the fastest SSD on the market.

The landscape of the SandForce market is changing today with many drives getting more capacity. MyDigitalDiscount.com celebrates big with OCZs number.

OCZ is leading the way for consumer SSDs. The Agility is its mainstream product, but how does it compare to other manufacturers leading products?