The ROCCAT 7.1 Air wireless gaming headset is very good on battery life, has a comfortable fit, and has a very full sound signature. The downsides are the microphone quality, power button location, and some other design choices.
Buy at Amazon 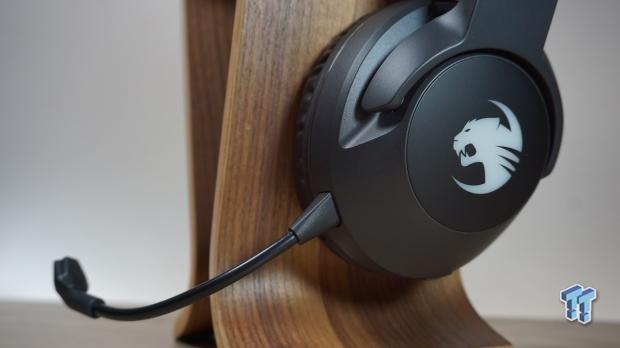 Under the ROCCAT banner is the Elo line of gaming headsets, and at the top of that line is the ROCCAT Elo 7.1 Air. Today we have the Elo 7.1 Air in-house for testing, and throughout this review, we will be exploring its different features and sound signature.

Additionally, we will be comparing the Elo 7.1 Air to other headsets at a similar price range. ROCCAT has priced the ELO 7.1 Air at $99, and throughout this review, I will be explaining the positives and negatives of the headset if you decide to purchase one. Before we get into the positives and negatives, let's take a close up look at the headset to see what we are dealing with. 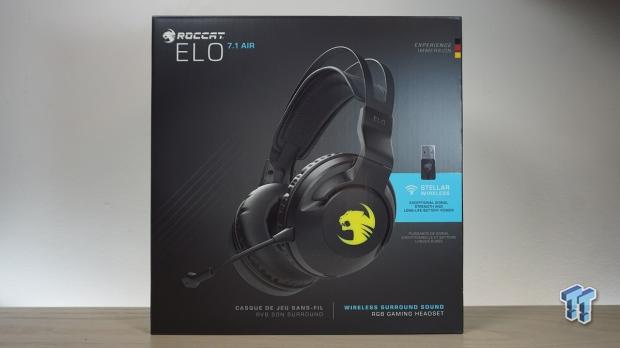 Here we have an image of the front of the box, and as you can see, we have a nice graphic of what the headset looks like and the provided USB dongle. 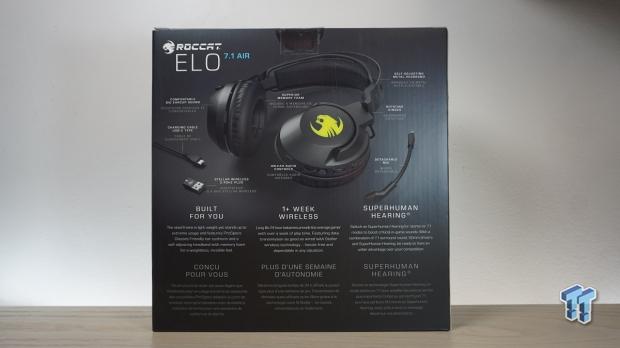 Moving on to the back of the box, we can see a much more in-depth look at the headset and its features. Most notably, we can see that the Elo 7.1 Air comes with Turtle Beach's Superhuman Hearing technology. 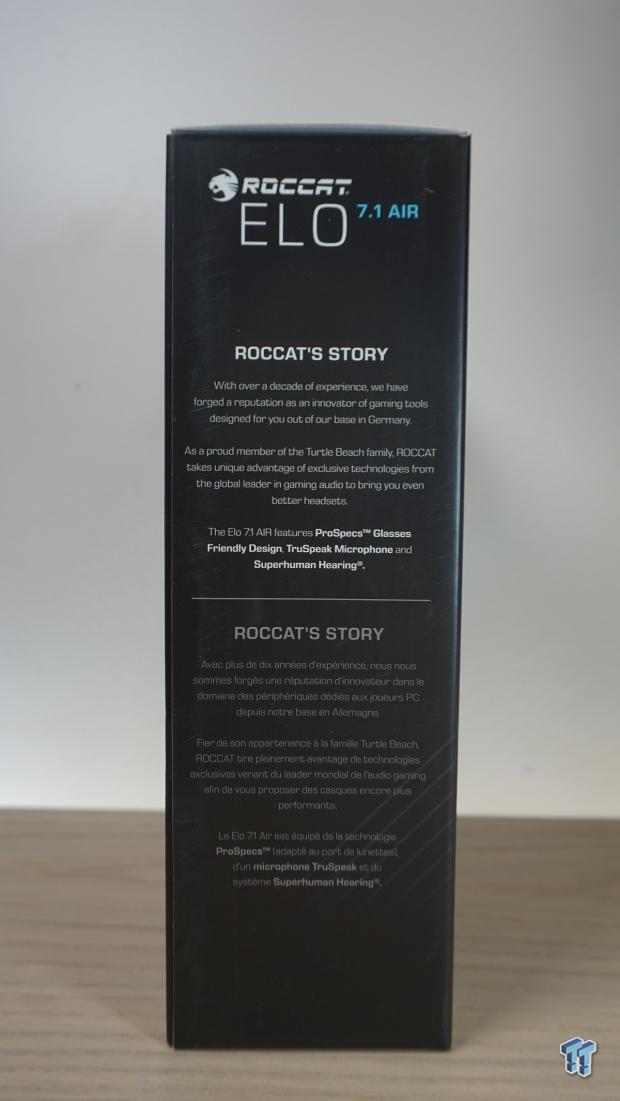 On one side of the box, there is a short description of Turtle Beach and ROCCAT and some of the features the headset is equipped with. 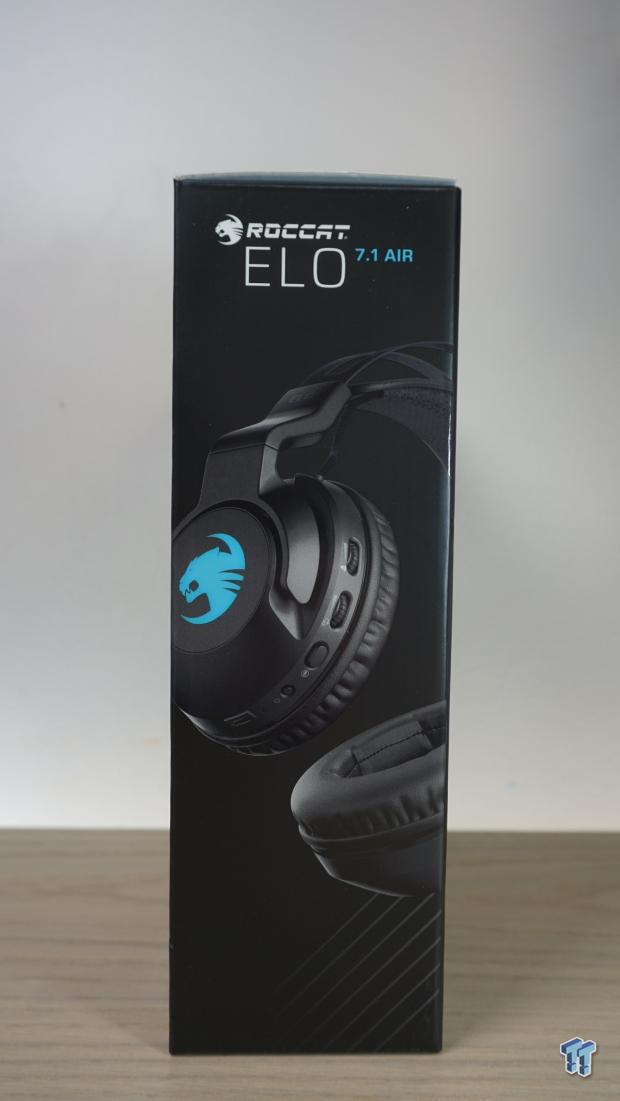 The last side of the box has a different graphic on the front and center - displaying the color change in the logo from yellow to blue. 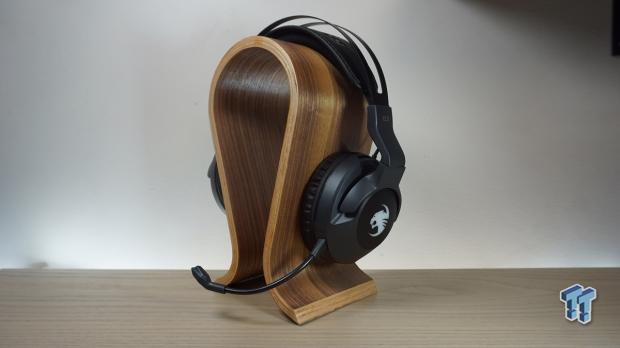 Here we have a shot of the Elo 7.1 Air outside the box, and as you can see, it features an all-black design with very oval-shaped earcups.

In this image, we can see the earcup hinge and the slick-looking ROCCAT logo placed on the outside of the left earcup. Another thing to note in this image is the removable microphone. 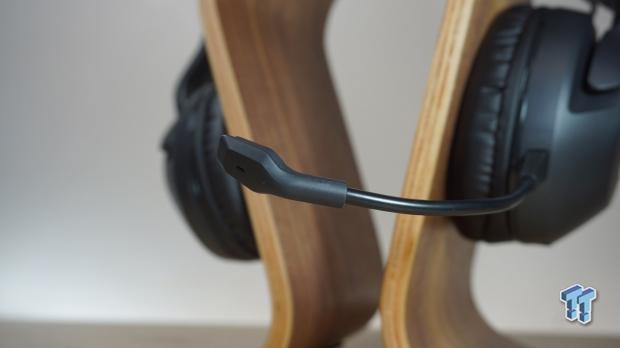 Speaking of microphones, we have a nice close-up shot of the Elo 7.1 microphone, which features TrueSpeak microphone technology. 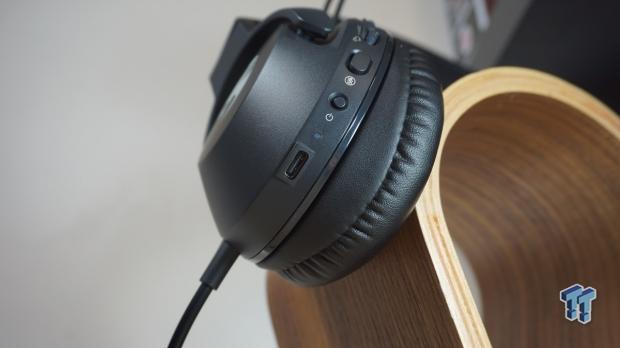 Moving onto the base of the left-earcup, we can see a USB-C port, LED status indicator, power button, and a mute microphone button. 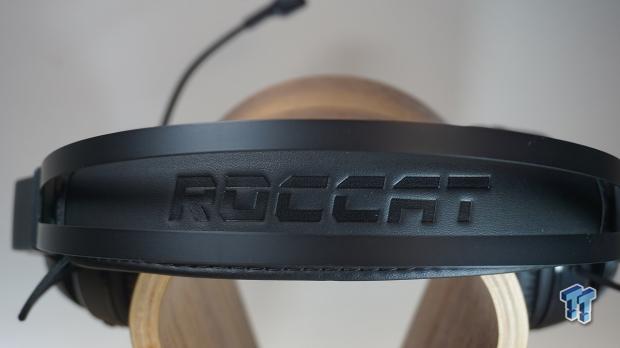 The top of the headband features some ROCCAT branding - I really like how the words are punched into the leather. It creates a very nice effect. 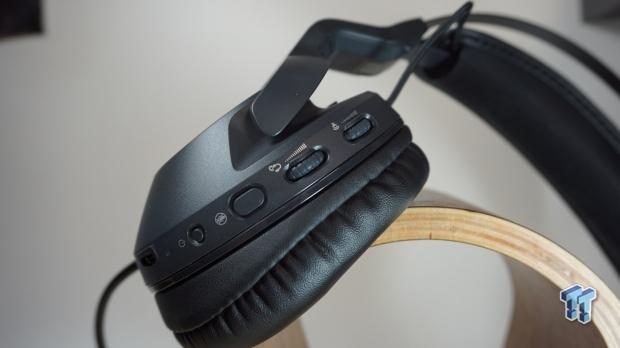 Closer to the top of the left earcup, we have the volume control and variable microphone monitoring wheels. 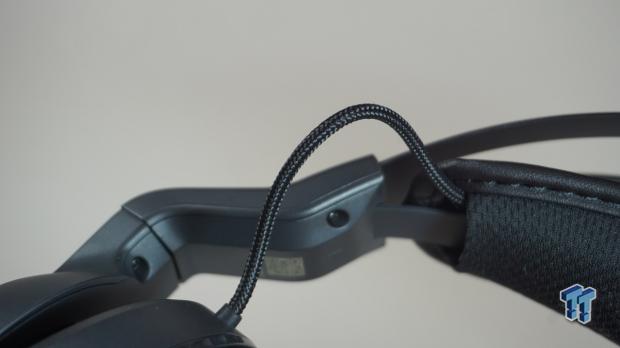 Next, we have a shot of the connecting cable that appears on both of the earcups. 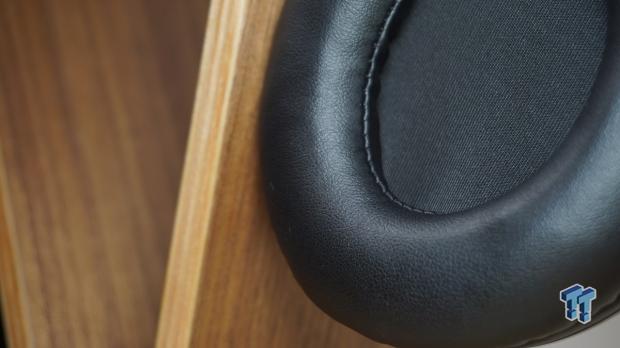 In this image, we can see that the earcups feature a nice soft leatherette finish. 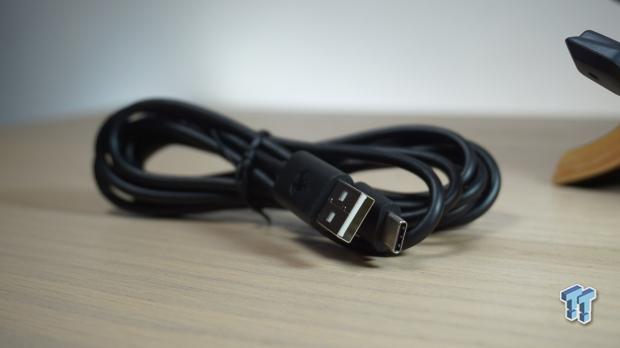 The Elo 7.1 Air features USB-C charging, and in this image, we can see the provided USB-C to USB-A cable. 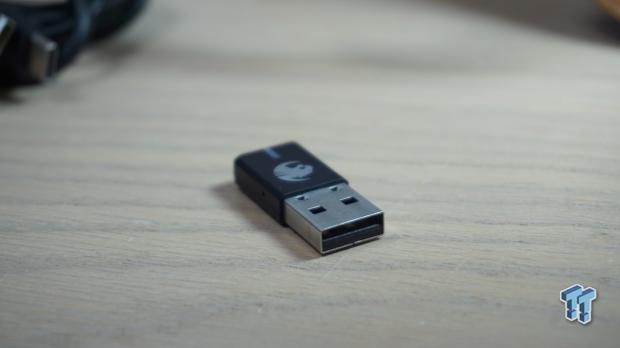 Lastly, we have an image of the small dongle that provides wireless connectivity. 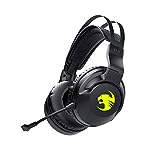 When the ROCCAT Elo 7.1 Air box arrived at my door, I quickly rushed to get the new headset on my head to begin testing. In short, I was first impressed with the price of the headset and the comfort it was supplying. I prefer headsets with a nice tight clamping pressure, but I can understand that there are many people out there who don't. The Elo 7.1 Air is one of those headsets that has a tighter clamping pressure, and despite the headset coming with ProSpecs Glasses Friendly Design, I still found that when I wore glasses, I began to experience some discomfort.

Without glasses, the Elo 7.1 Air really gives quite the experience when it comes to locked in comfort. The headset barely moves on your head due to the clamping pressure - this was discovered with a simple 'pick up the pen' test. While the headset is a snug fit, it's still very breathable. Throughout my testing time, I didn't notice my ears getting too hot, which was something I was making sure to look out for, considering the headset's earcups are leather. On top of that, I was surprised at how light the headset was, and how that lightness didn't affect its durability. 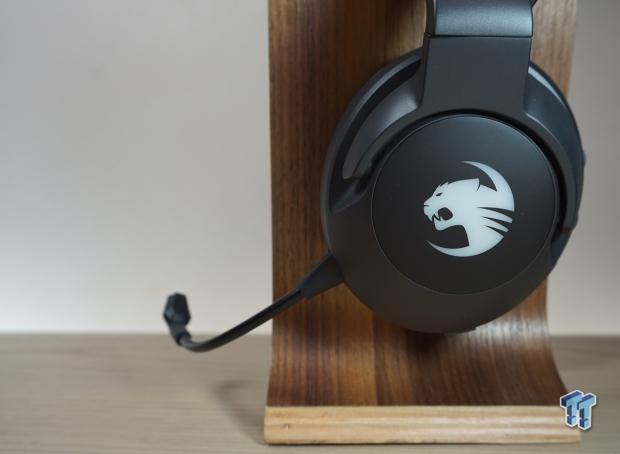 The Elo 7.1 Air is quite a light headset, yet it is sturdy and strong. I would not be concerned about breaking this headset through dropping it, or even the odd rage throw. However, with the design of this headset comes an Achilles heel, and that is a small wire that is connecting to each earcup. If I was to put a bet on a place for this headset to break, I would choose this spot - for obvious reasons.

While the earcups are very comfortable and adjust very nicely, there is a few problems that are worth mentioning. The back left earcup looks and feels like a mess - here's why. Firstly, the power button is the tiny, and the mute microphone button is quite large. This caused me to accidentally mute myself constantly when I was trying to power down the headset. To solve this, I suggest that the next iteration of the 7.1 Air comes has a larger power button with a flip-to-mute microphone, and not a removable microphone.

Overall, the design of the Elo 7.1 is more than decent. I would happily recommend this headset to someone that wasn't looking to spend too much money on a comfy gaming headset. While there are some clear design improvements, the positives of the headset clearly outweigh the negatives. Great work here ROCCAT!

The ROCCAT Elo 7.1 Air is supported by the ROCCAT Swarm software, which can be downloaded here for anyone who needs it. 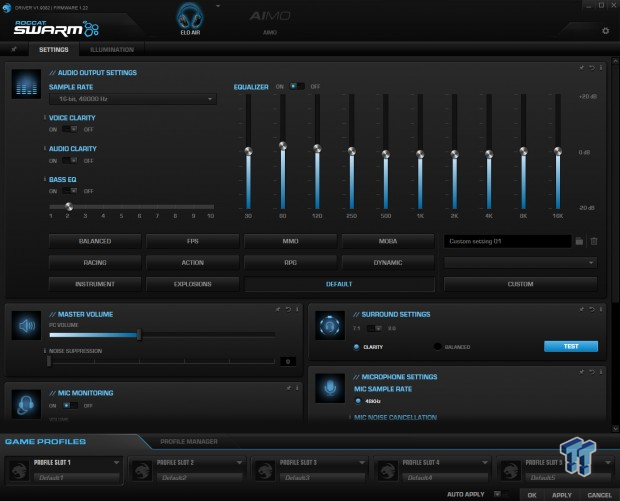 After you download the ROCCAT software, you will be presented with the above screen after you have plugged in your 7.1 Air. The above screen will be where you change the majority of the headset's settings. As you can see, there are multiple preset EQ settings, surround sound settings, microphone settings, and mic monitoring settings. 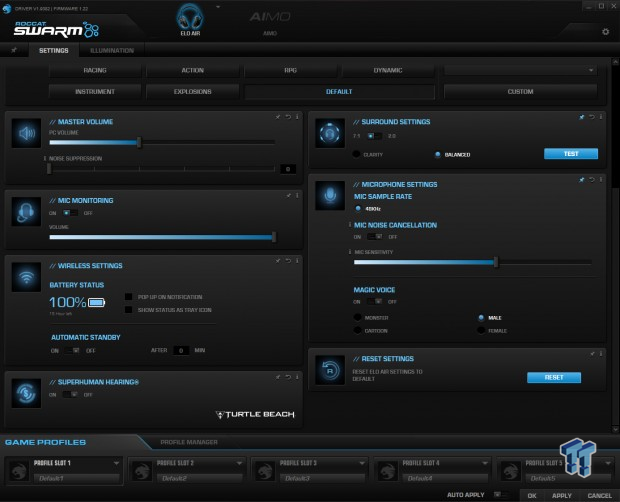 Scrolling down, we can see a much better view of all the settings the ROCCAT Swarm software provides. 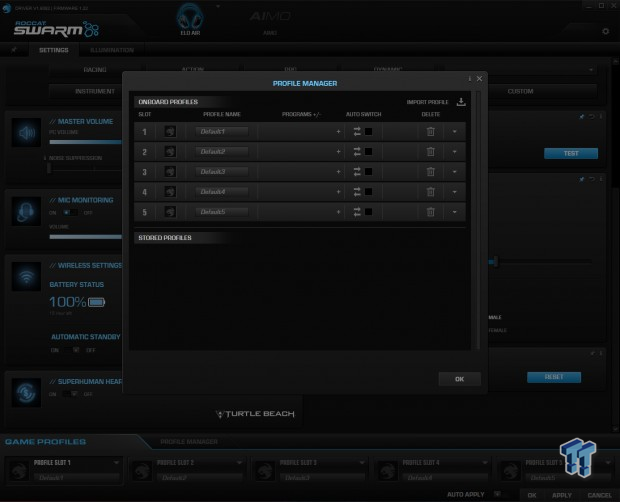 There is also the profile manager, which is where users can manage each of their custom audio profiles. 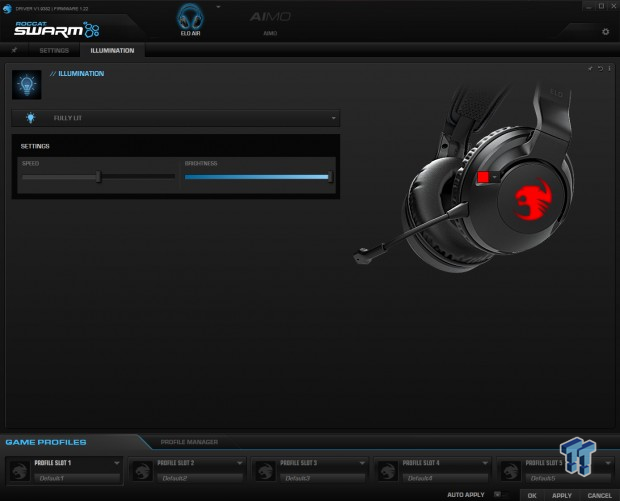 Lastly, we have the illumination tab for the headset, and in this part of the software, users can change the color of the RGB and the speed of the color change.

Overall, the ROCCAT Swarm software provides users with a lot of customization options, but I, unfortunately, found some bugs within the software. For example, the battery status indicator within the software doesn't correctly reflect the amount of charge that is left in the headset, as sometimes I would check the software and see that there was 25% left, but my headset would go flat after note even 5 minutes of use.

As with all of my headset reviews, I like to use the headset I'm testing from anywhere between 20-30 hours before I write my review. I do this because I believe that after this amount of time, I have gathered a decent understanding of the headsets sound signature, its positive features, and places where it lacks.

For gaming, I jumped straight into a long session of Apex Legends. For my initial testing, I played Apex Legends with stereo sound enabled. I chose to do this because using the stereo sound setting for hours would allow me to get a good perspective of the 7.1 surround sound when I changed over to it. Now, the stereo experience this headset gave was quite impressive. Gun shots, grenades, and footsteps were clean-cut, and crisp. It felt that the headset was more orientated towards the mid/high range, which makes it particularly good for competitive shooters such as Apex Legends, Call of Duty: Modern Warfare, and Valorant. 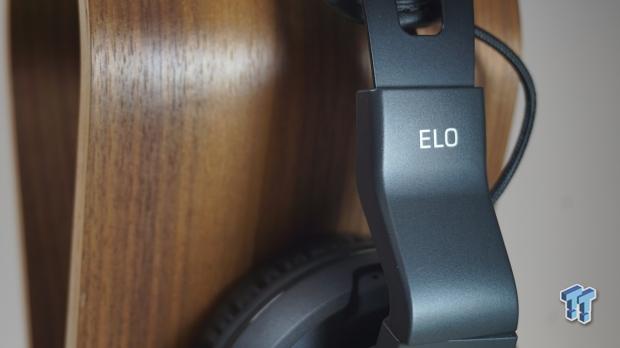 During my stereo testing, I noticed that footsteps, in particular, were very easy to pinpoint - something I very much appreciate in a gaming headset. After some considerable time testing stereo, I moved over to 7.1 surround sound, and this is where things got a little strange but in a good way. With 7.1 surround sound enabled, my spatial awareness was increased significantly, but I had trouble determining the distance between myself and my enemy. I also noticed that the sounds from the guns were much quieter, and the mid/high range was quite emphasized.

Overall, ROCCAT has packed the 7.1 Air with some great gaming audio, and for the price of the headset, I would say that you won't be disappointed with it if you decide to purchase it. Great work, ROCCAT.

Above are microphone recordings from headsets that are all priced at the $99 mark. After listening to each of the recordings, you may be able to tell how terrible the ROCCAT Elo 7.1 Air microphone is. While this very well could be my ears, take a listen for yourself. I would rank the headsets in order of microphone quality like this:

I really love the clamping pressure and the comfort of the 7.1 Air. It's very firm yet very light due to the weight of the headset. The stereo gaming experienced was also very enjoyable, with a very full and rich sound signature. The charge time for the 7.1 Air is also very good, as the headset is equipped with a USB-C charging port.

Some of the big issues of the 7.1 Air lay in the design of the headset. I found the power button to be too small and a miss of a great opportunity to implement a flip microphone/mute design. Additionally, there are also the software bugs.

The king of ROCCAT's line of PC gaming headsets is the ELO 7.1 Air, and after using it, I can say that it's certainly in the fight for the best $99 gaming headset.

The 7.1 Air does need to pick up its game in terms of microphone quality, design choices, software, and surround sound audio. However, I believe that if ROCCAT did make these changes to the 7.1 Air, the company would have a very competitive gaming headset at the $99 mark, as the comfort, rechargeability, and immersion levels are already there.

Overall, ROCCAT has made a gaming headset that is recommendable, but not without some warnings, which is not unusual for a headset at this price point. Who would I recommend a 7.1 Air to? I believe the type of gamer that would enjoy its positives is someone who isn't using a microphone very often and prefers headsets that have a nice tight fit, long battery life, and a solid stereo experience.

On a side note - I will be reviewing ROCCAT's stack of ELO gaming headsets, so keep an eye out for those in the coming weeks!

The ROCCAT 7.1 Air wireless gaming headset is very good on battery life, has a comfortable fit, and has a very full sound signature. The downsides are the microphone quality, power button location, and some other design choices.