The 1TB SL100 Pro is an entry-level solution positioned as a flagship device in Lexar's lineup.
Buy at Amazon

We tested the SL100 Pro when it was first released early 2019, the 500GB model was sent for review at that time, and with a 1TB model out in the wild currently, we had to get our hands on it to see if it was just as good.

The SL100 Pro is the current flagship for the Lexar portable SSD lineup. It is offered in two capacities at the time of writing; 500GB and 1TB. Performance is rated up to 950 MB/s read and 900 MB/s write behind a USB-C connection and USB 3.2 Gen 2 interface.

Compatibility includes Windows and macOS with DataVault software for drive encryption. MSRP of the 1TB SL100 Pro from Lexar comes in at $199.99 with a three-year warranty. 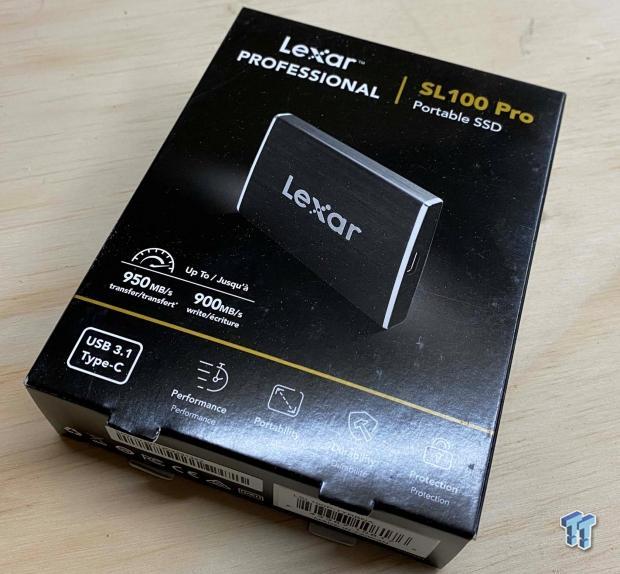 Packaging follows the traditional black and gold colorway of past Professional series solutions from Lexar. You will find model identification along the top with the performance and features listed down below. 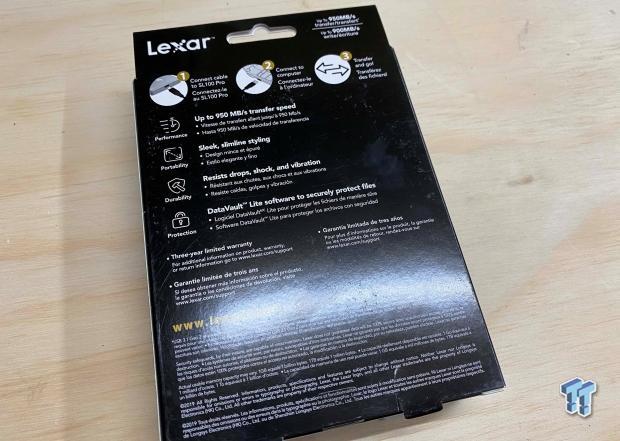 The backside goes into more detail on the features, including performance and software. 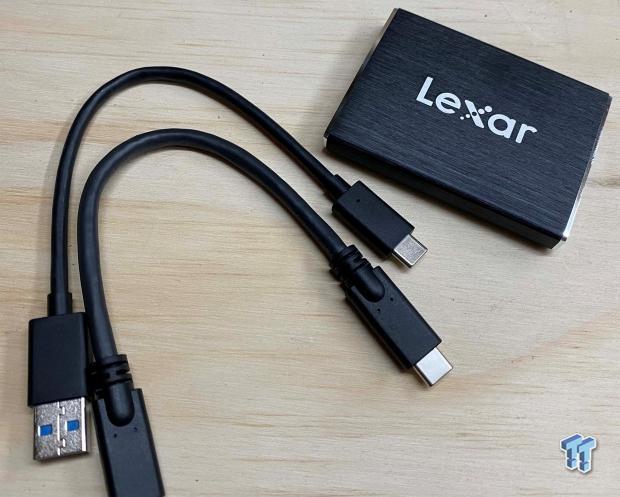 Unboxing, the SL100 Pro includes an A to C cable and straight USB-C cable with the drive. The chassis of the drive offers a brushed black appearance on a metal enclosure, Lexar branding centered. 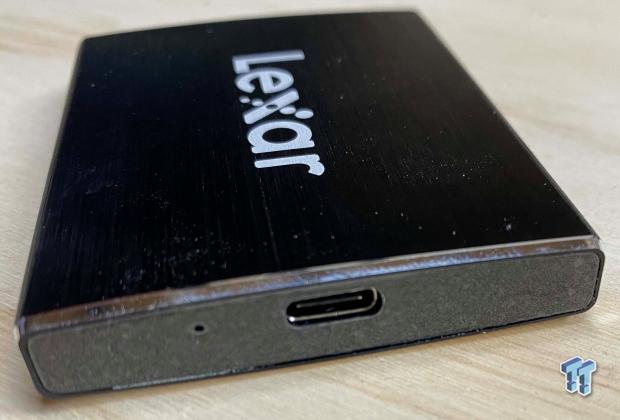 The edge houses the USB-C connection. 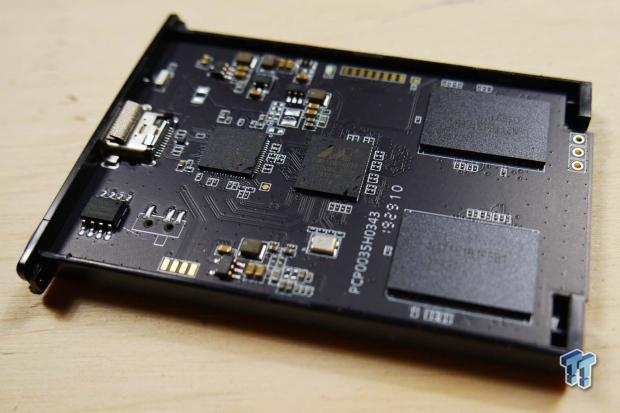 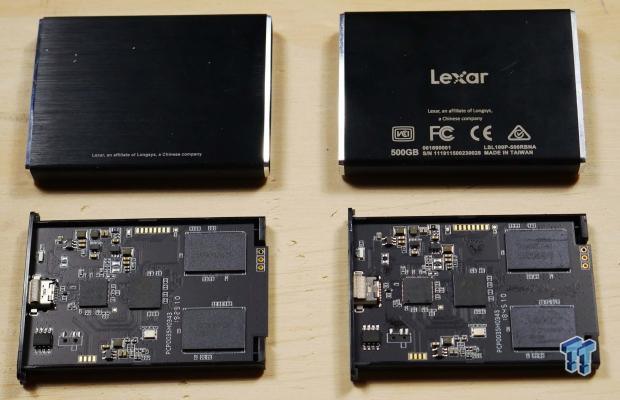 Here we have a direct comparison between models, you will note changes to the enclosure for the 1TB on the left, but otherwise, the drive itself shares the same PCB and layout. 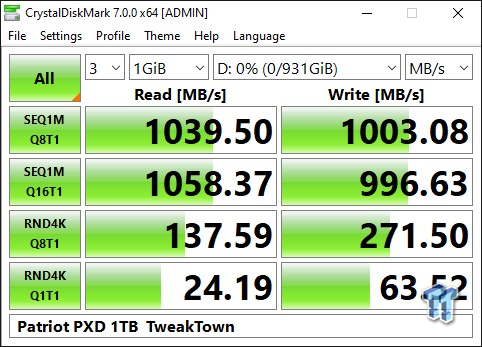 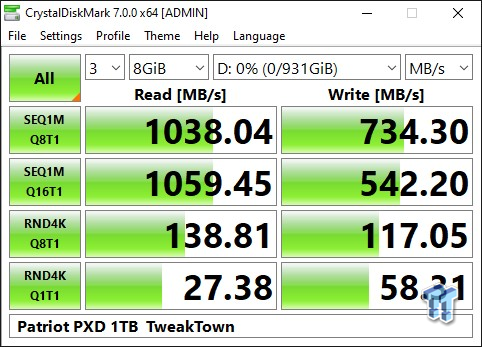 Moving the workload up to 8GB in CDM, we get a performance drop in writes, down to 734 MB/s. 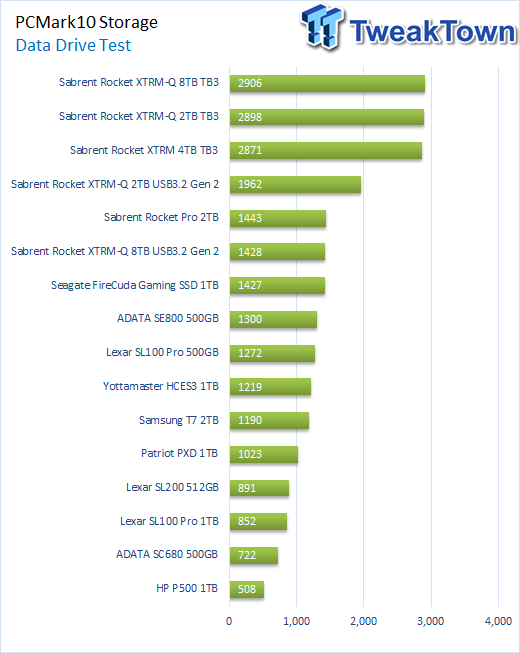 PCMark10 provides a Data Drive test to test portable and secondary drives. The SL100 Pro 500GB we reviewed over a year ago scored 1272 in this test, while the new 1TB model came in quite a bit lower, scoring 852. 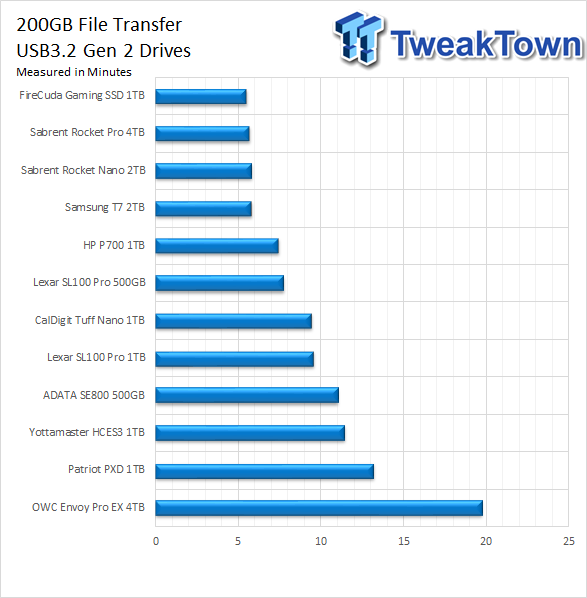 New to our testing is a 200GB data transfer that aims to weed out drives that lose performance during backup scenarios. In this scenario, the 1TB SL100 Pro again was slower than its 500GB counterpart by nearly two minutes, the 1TB doing it in 9.6 minutes and the 500GB in 7.9 minutes.

With the 1TB model now in the books, I can certainly say the build quality is on point with what we saw in the 500GB model last year. The metal enclosure offers increased durability for exterior elements while the interior is secured with a plastic retainer. As for hardware, Lexar could have chosen better components. The JMS583 is known for its issues, so much that vendors are releasing firmware updates to combat the problems.

The performance of the 1TB model was quite good in sequentials, especially canned benchmarks like CDM. Moving into PCMark, we found the SL100 Pro didn't do too well, scoring 852 in the Data Drive test though not the worst we have seen. The 200GB file transfer put the SL100 Pro middle of the pack, right with drives like the CalDigit Tuff but still slower than the 500GB model SL100 Pro and SL200.

Pricing really isn't a strong suit for the SL100 Pro, either. At the MSRP of $199.99, it's $30 higher than the Samsung T7 in the 1TB capacity, and the T7 is a more consistent drive in real-world workloads.

The 1TB SL100 Pro is an entry-level solution positioned as a flagship device in Lexar's lineup.