HP isn't always the busiest player in the storage market but has released several new solutions this year. In my workload, we have seen the two options on the portable SSD front with the launch of the P500 and P700. They recently reached out to offer new SATA and NVMe solutions for review, so today, we look at the S750!

The S750 is marketed towards entry-level platforms, basically a hard drive replacement that offers all of the benefits of an SSD without the high price point. With that being said, this new solution replaces the S700 with three new capacities - 256GB, 500GB, and 1TB.

The S750 relies on the SM2259XT controller paired with 96L Intel B27A 3D NAND, nearly the same build Crucial uses in the BX500 platform. Performance is marketed at 560 MB/s read and 520 MB/s write while 4K read and write reach 74K and 80K IOPS, respectively. Endurance is rated at 650TBW for the 1TB model in the house, which's 0.6 DWPD, pretty common for low-cost SATA. 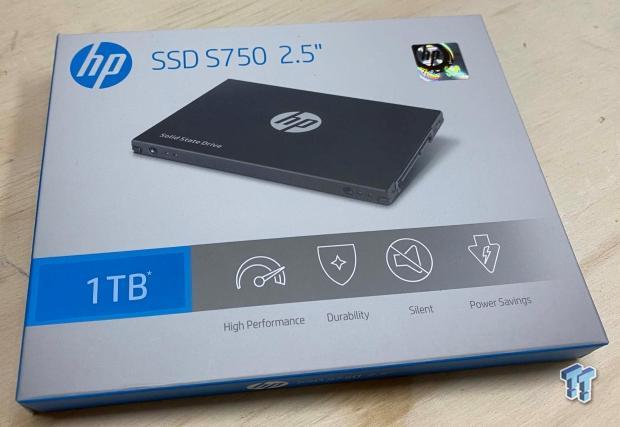 Packaging follows the box design from the P500. Capacity bottom left and image of the drive centered. 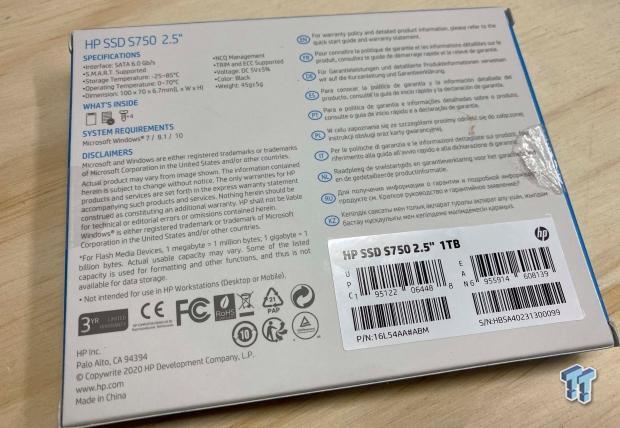 On the back, we have drive specifications top left, followed by box contents, disclaimers, and warranty information. 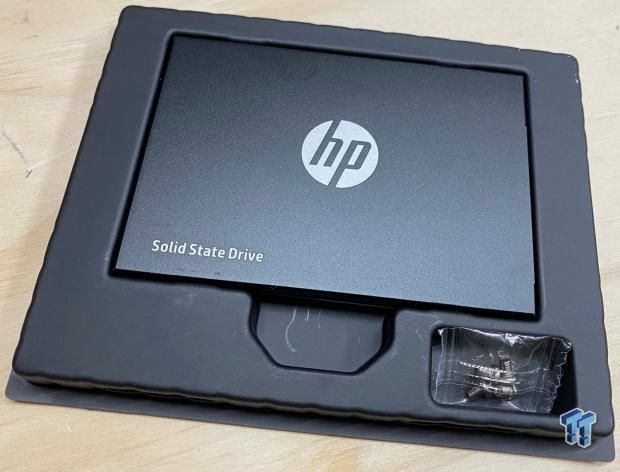 Unboxing, the S750 was delivered in a plastic tray. 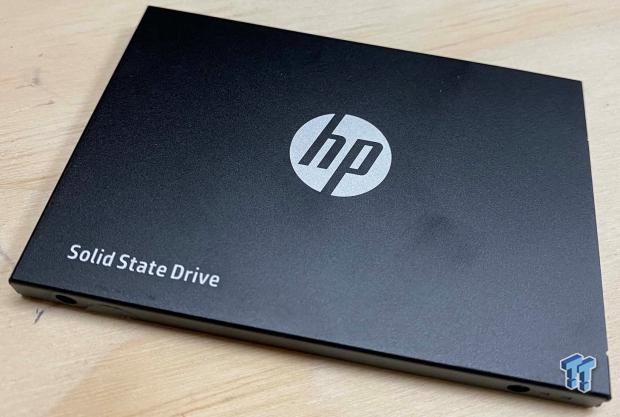 The exterior of the S750 is simple, with HP branding on a black metal shell. 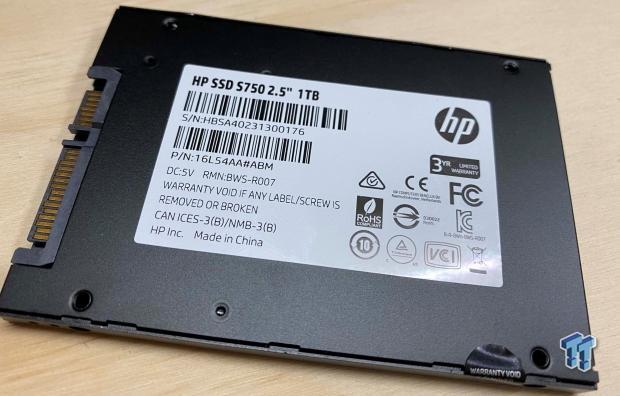 The bottom offers capacity and regulatory information on a sticker. 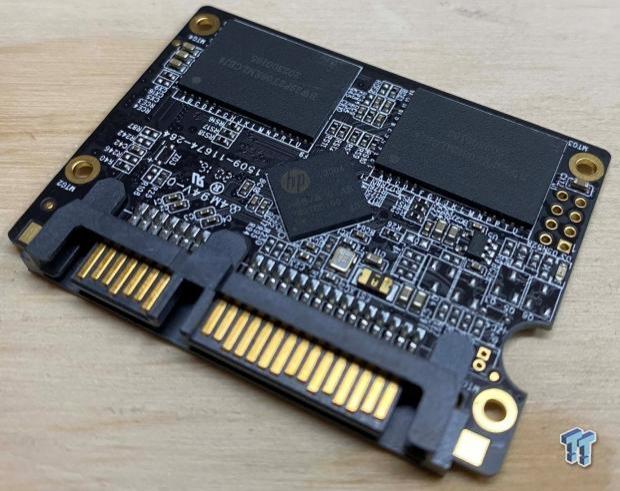 Opening the drive up, we find the SM2259XT masked as an HP controller while the NAND is Intel 96L; two packages on both sides. 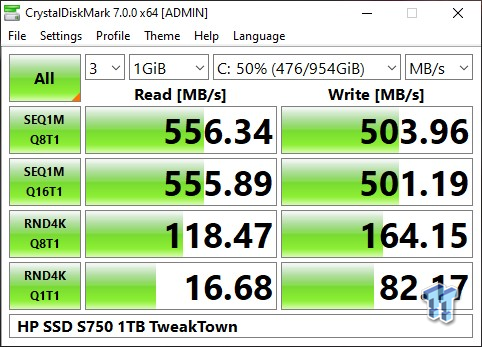 CDM is a staple in performance testing; version 7 has seen some updates in the testing workloads. Sequential performance tops out at 556 MB/s read and 503 MB/s write with the 1GB workload. 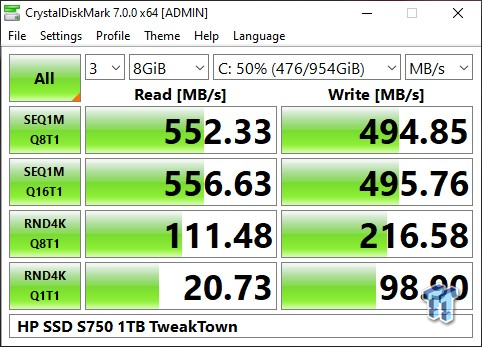 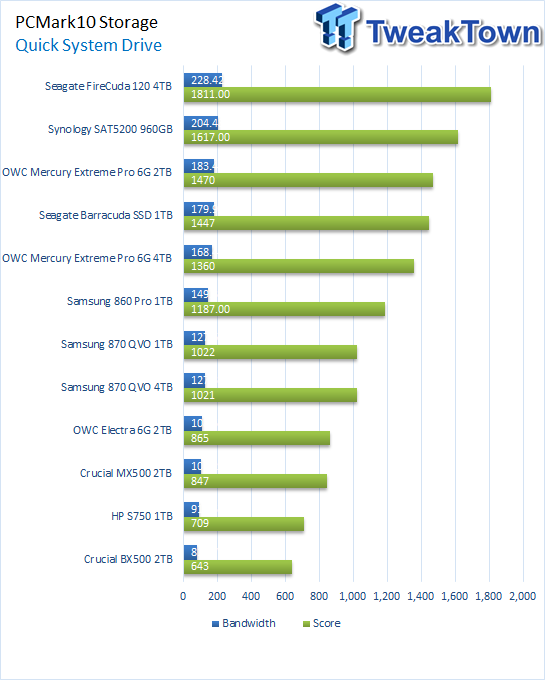 Pushing into PCMark10, we start with Quick System Drive and land with a score of 709, second from the bottom in our charts. 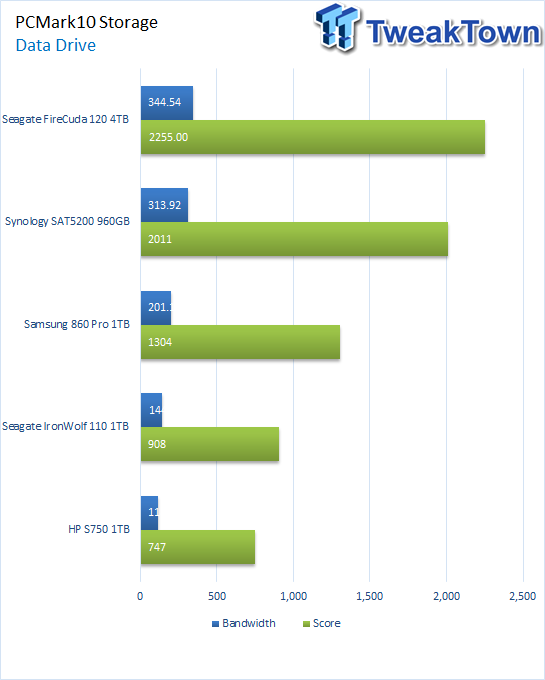 Data Drive, which shows the drives viability as a secondary drive, offered a score of 747, the worst we have seen to date. 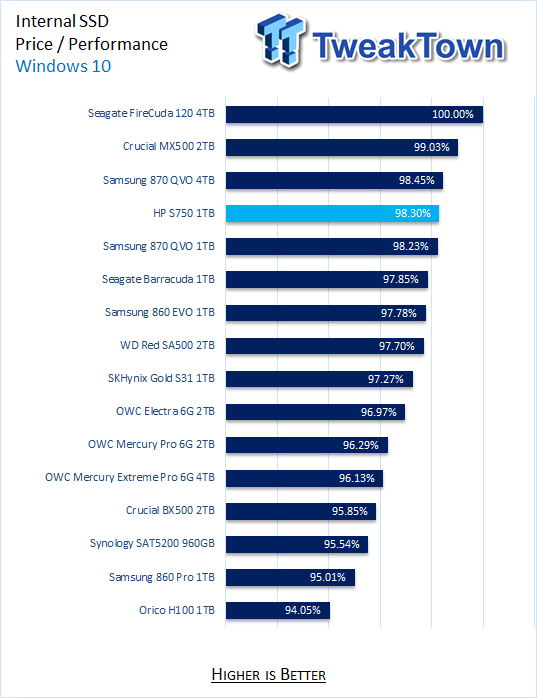 Last, we have Price/Performance, which assumes an $89.99 price tag for the S750, anything higher, and the drive will quickly start dropping from its place on the charts, which at the time of writing carries a score of 98.3%.

The HP S750 is on point for what it is, a low-cost entry-level solution for those just wanting to replace legacy HDDs. It does have some perks like a metal enclosure when most SATA drives have gone to plastic, and it does offer several capacity options. Build quality appears to be good. They have chosen a proven design with the SM2259XT and Intel B27A 3D NAND.

Performance of the S750 started out quite well in sequential testing, CDM showing 556 MB/s read and 503 MB/s write with the 1GB test. Flipping that to 8GB lowers performance only slightly, about 10 MB/s for read and write. PCMark 10 was not kind to the S750 with a score of 709 in the System Drive test and 747 for Data Drive, but we knew this going in.

Pricing is going to be critical for the S750, and while HP ( BiWin) hasn't set the MSRP at the time of writing, if it's more than $10 over the BX500 1TB from Crucial, it's a lose-lose situation for this drive.

The HP S750 SATA SSD offers a proven design for users wanting an entry-level 1TB solution, just watch the price anything over $89.99 is a no go!