Attack of the Clones is hardly top shelf Star Wars and its aged poorly in content, execution and technical prowess.
Buy at Amazon

Despite its commercial success, Star Wars fans were left confused and disappointed by The Phantom Menace, which merged into relentless negativity by the time that its sequel hit screens three years later. This made the launch of Attack of the Clones a harder sell for LucasFilm and Fox, and unfortunately, Clones seemed to lean in on the complaints of its predecessor and magnified them exponentially.

Anakin Skywalker (Hayden Christensen) has grown up to be a confident, albeit arrogant Jedi under the tutelage of Obi-Wan Kenobi (Ewan MacGregor), whose command of the Force is undoubtedly strong, but altogether reckless. The Jedi are spread thin across the galaxy to defend the Republic from the growing threat of the Separatists, led by Count Dooku (Christopher Lee).

Still, a pawn to be manipulated by Darth Sidious (Ian McDiarmid). When the Jedi become aware of a giant army of humanoid clones designed for battle purposes, the wheels for all-out war start to grind into action. Amidst this backdrop, Anakin Skywalker, now reunited with Padme Amidala (Natalie Portman), foster an impossible relationship that feeds into his insecurities and desire for control - and love.

Attack of the Clones is essentially a good story, told poorly. Against a sea of bluescreen, the otherwise accomplished cast looks both confused and unconvincingly composited into the ILM created backdrop. The climactic Clone War battle is basically a joke, the most bloodless, unrealistic, and cartoony portrayal of war ever seen with zero consequences that resemble a video game.

Despite input from writer Jonathan Hales, George Lucas' screenplay is clunky and obviously a process that he doesn't enjoy. Attack of the Clones signaled that Lucas had lost his once deft handle on the franchise, leaving hardcore and casual fans alike dismayed and disappointed. 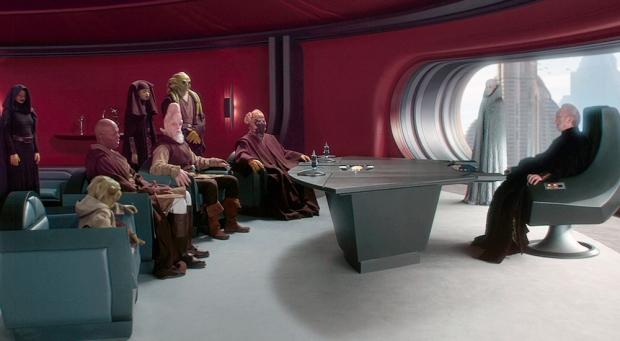 Star Wars Episode II: Attack of the Clones is presented in its original aspect ratio of 2.39:1, encoded with H.265 compression, and finished with a static HDR-10 pass.

Utilizing the Sony HDCAM format, Attack of the Clones was lensed at 1080p and completely finished in a 2K digital intermediate, which in 2002 was cutting edge stuff, with many of the technical issues that have long since been resolved were all problems that the film had to deal with on a day-to-day basis. 4K upscales of 2K digital intermediates are still very much the rule and not the exception. Still, the relatively antiquated methods behind Attack of the Clones means that this film has precious little to offer in the 4K domain over the previous Blu-ray release.

In some ways, the upsampling reveals more of the digital seams than LucasFilm would care to admit, with the vintage CG and poor compositing a big factor in this. Eagle-eyed fans will notice a little more cropping on the top and bottom of the image, likely masked to present a cleaner letterbox post-up-rezzing, and even the HDR pass doesn't have much to offer, likely due to the limited color space the film was filmed and finished in.

Overall, the 4K debut of Attack of the Clones is a disappointment, albeit an expected and unavoidable one. 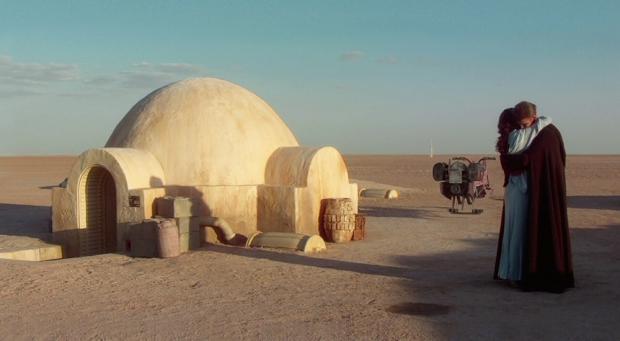 Building on the 6.1 track prepared for the 2011 Blu-ray by LucasFilm sound mixer Matthew Wood, the new Atmos mix is an essentially flawless presentation of the film that wrings every bit of sonic detail from the original elements and doesn't materially alter the original mix from the legendary Gary Rydstrom who returns for the last time to the Star Wars universe. Attack of the Clones features an aggressive, full-blooded mix that will wring every last ounce of performance out of your audio gear.

Surround channel use is very high, and when the clone battle begins, a cacophony is unleashed. The bass is big, bold, and extremely loud. Occasionally some of the dialogue features a noticeable hiss, suggesting that it wasn't looped in a recording booth as is common practice. The soundtrack by John Williams is quite reasonable but far from his best. George Lucas evidently didn't love it that much either, cutting it to pieces in post-production, tracking in snippets from The Phantom Menace, and then mixing it down in favor of the big sound effects. If you have a keen ear, the sloppy editing does become fairly obvious.

Almost making up for a tepid video transfer, Attack of the Clones at least sounds like the big blockbuster that Lucas was aiming for. 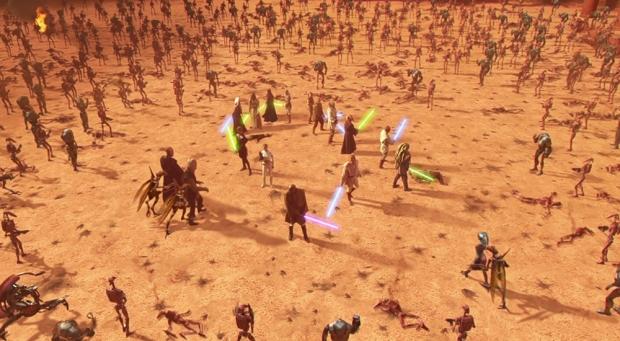 The extras for Star Wars Episode II: Attack of the Clones are dispersed over the two included Blu-ray discs. With none to be found on the 4K disc, this means there's no option to watch the 4K disc while listening to the audio commentaries. Such is the prestige of Star Wars that Disney has reversed their one-disc standard approach to 4K releases in this country, bundling each title with not one, but two Blu-ray discs. This is a welcome change, but I suspect one that will be short-lived.

The vast majority of features have been ported over from the previous Blu-ray and DVD releases, except three brief featurettes, Conversations: Sounds in Space, Discoveries from Inside: Costumes Revealed, and The Art of Attack of the Clones, which amount to around 16 minutes of footage. Produced by documentarian J.W. Rinzler, these pack a lot of information in their short run time but are just far too condensed to get excited about. The former is the highlight of the sonic creativity that the film embraced in spades.

Returning are two audio commentaries, the first featuring Director George Lucas, Producer Rick McCallum, Sound editor Ben Burtt, and ILM staffers Rob Coleman, Pablo Helman, John Knoll, and Ben Snow which was recorded in 2002 for the DVD release, while the second is assembled from interview comments and edited together in a fairly relevant and cohesive manner. 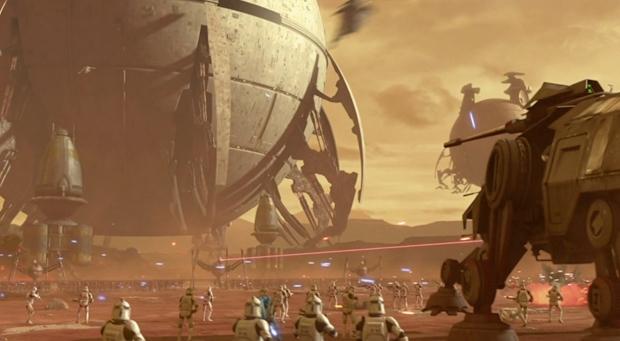 The feature-length documentary From Puppets to Pixels, which debuted on the first DVD release, makes a very welcome return, albeit locked to standard definition and appearing a little worse for wear. Over its 52 minute length, the feature looks at the evolutionary role that CG was playing in the industry at the time of its production, which gave Lucas the confidence to push forward with multiple digital characters, including Yoda's conversion from a puppet to CG.

A further two documentaries State of the Art: The Previsualization of Episode II and Films Are Not Released, They Escape take a closer look at other technical aspects which Attack of the Clones pioneered.

Next up are nine Deleted Scenes, most cut quite clearly in the editorial process which includes a more explained backstory for Count Dooku's rejection of the Jedi order, a very unfinished extended speeder chase, more background on Anakin's recurring nightmares, an introduction to Padme's family and an additional subplot meant for the climactic end battle which sees a subset of Jedi leading an attack on the droid control ship.

Finally, we have the Episode II Visual Effects Breakdown Montage and some limited Interviews with cast and crew to round out the collection.

Attack of the Clones is hardly top shelf Star Wars and its aged poorly in content, execution and technical prowess.