With mainstream solutions slipping into the market, the AX82U offers excellent performance with the possibility of being compatible with upcoming Wi-Fi 6e standards later this year.
Buy at Amazon

ASUS has always been one of the first vendors to release its Wi-Fi routers to the market. This has been true with both 802.11n when they released the WL500W and 802.11ac with the AC66U. That said, Wi-Fi 6 has seen a somewhat rocky released schedule with some vendors still not in the market at all, ASUS was once again one of the first right alongside Netgear, and with the Wi-Fi 6 standard getting a bit more spectrum later this year we are now seeing mainstream platforms come to market with lowered costs.

The platform for this solution is Broadcom, based on the BCM6750 SoC that operates with three cores clocked at 1.5GHz; this is paired with 512MB of DDR3, Nanya in the case of our sample. Flash appears to be Macronix with a capacity of 256MB. A second Broadcom BCM4X chipset handles the 4x4:4 5GHz radio for the AX82U.

The RT-AX82U is currently available at several online retailers, including Newegg, Amazon, and ASUS Store. MSRP is coming in at $299.99 with a two-year warranty. 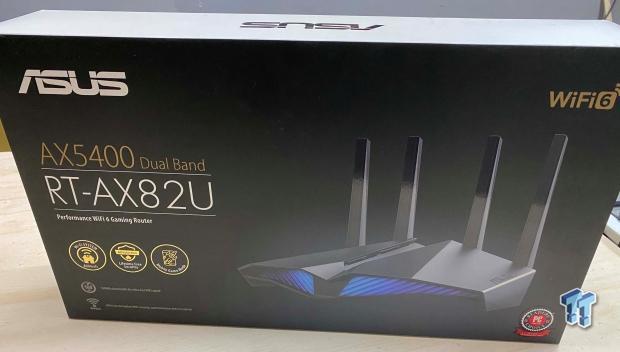 Packaging offers a look at the router on the right, marketing to the left with its AX5400 class and model number. 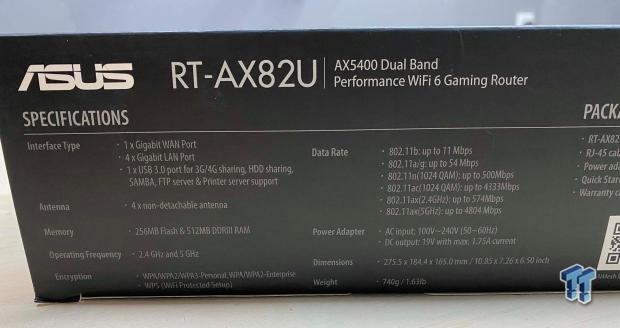 Along the bottom, we have the specifications that include the gigabit WAN port, 4x LAN, and USB 3.0 for storage and USB WAN solutions. 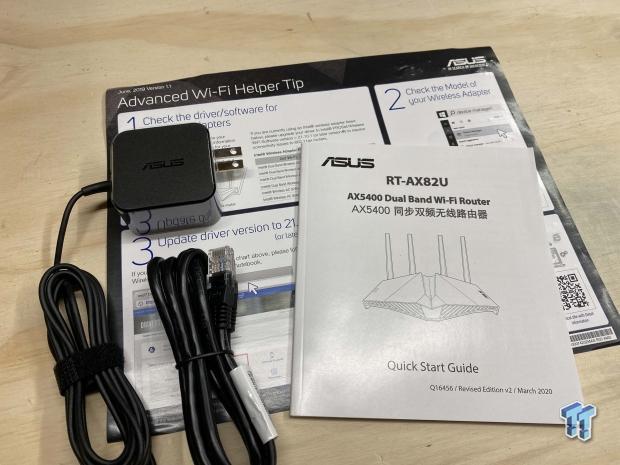 Included with the router, we have the power adapter and ethernet cables along with the quick start guide in several languages. 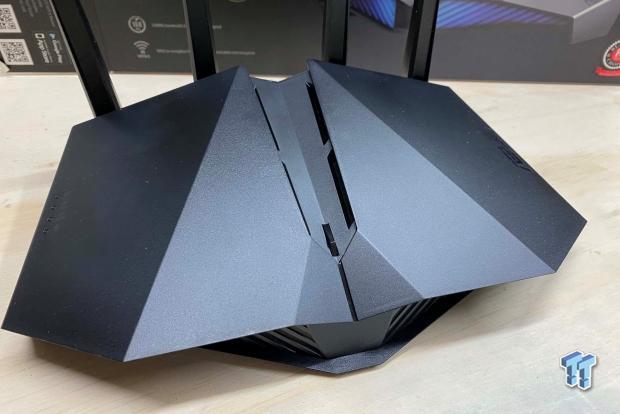 The router itself is a little toned down from past solutions; this is a horizontal desktop solution with a black satin finish. We have a button in the center that controls the LED under glow on the front and proper branding to the right with the ASUS logo embossed. 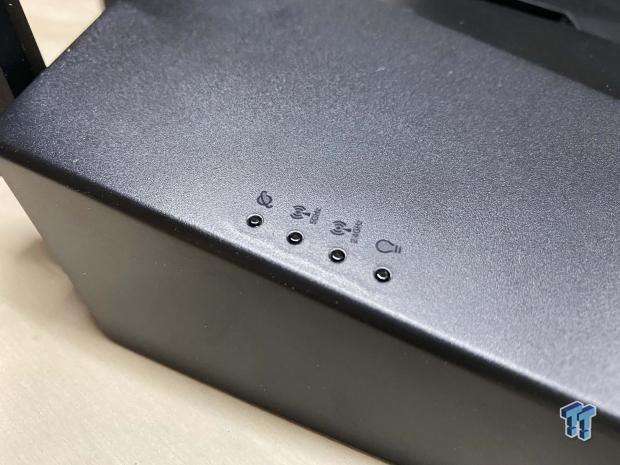 The left edge houses the four LEDs for the router. These include internet or WAN, Wi-Fi, both 2.4 and 5GHz, along with power. 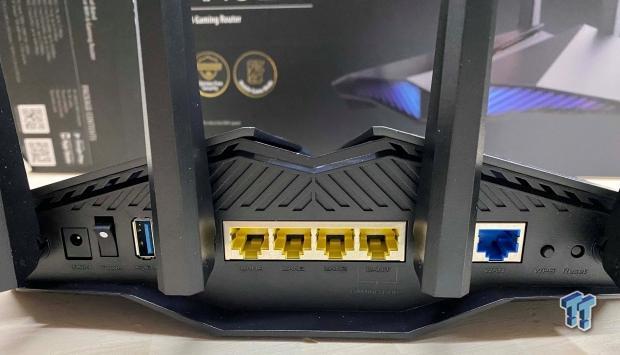 On the backside, we have a pretty simple setup. Power and USB at the far left, LAN in the middle, and WAN to the far right with the WPS and reset buttons. The four included antennae are not detachable. 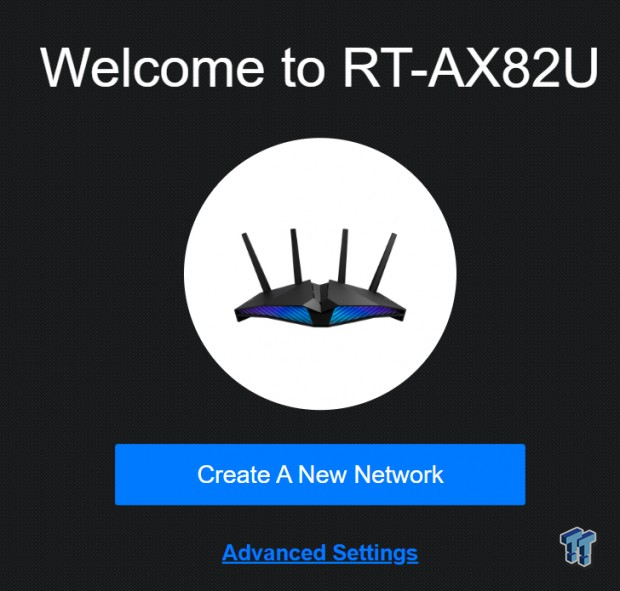 For AiMesh platform solutions, this is the typical setup routine. From this first menu, you can start setup with default options or changing the router "mode" by choosing advanced settings. 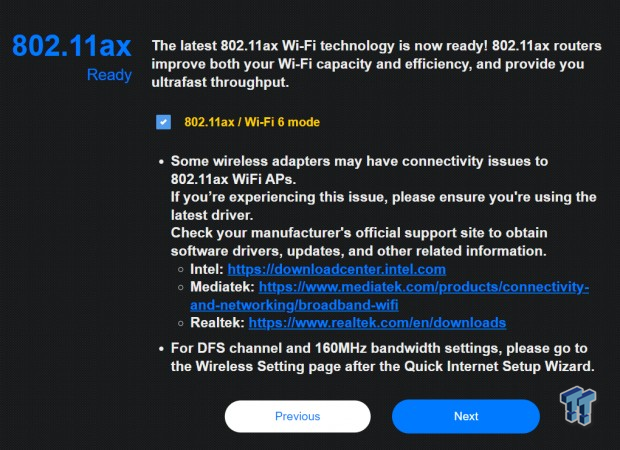 One significant change in the setup process for Wi-Fi 6 solution on AiMesh is the screen above. If you do not have any Wi-Fi 6 clients on your network, you can disable the technology from here and run in legacy Wi-Fi 5 mode. 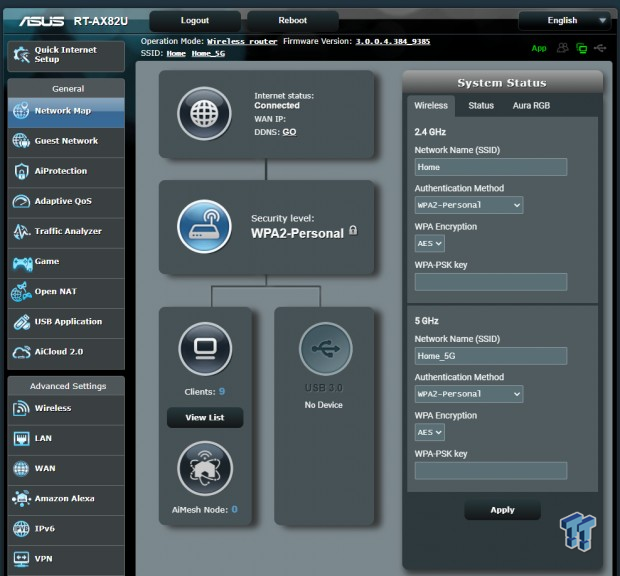 Once in, we have the AiMesh user interface, an interface that hasn't changed much at all since early Wi-Fi 5 routers were introduced. That said, we start with the dashboard giving us WAN details along with clients attached. To the right system status for the router hardware, wireless settings, and Aura to control the front LEDs. 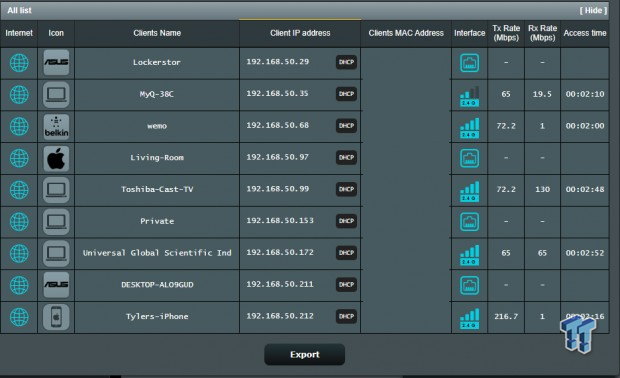 Moving into the client list, we can see al devices connected to the router, the radio they are connected to, and data rate. 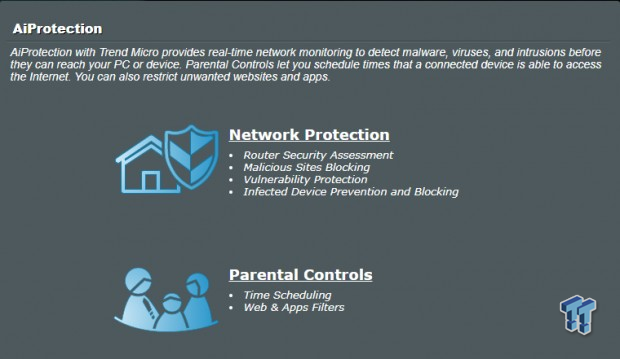 AiProtection is a built-in suite of security software aimed at helping you shore up the setting of your router, so there are no security risks. Also, AiProtection offers Parental controls per device with time scheduling and app filters. 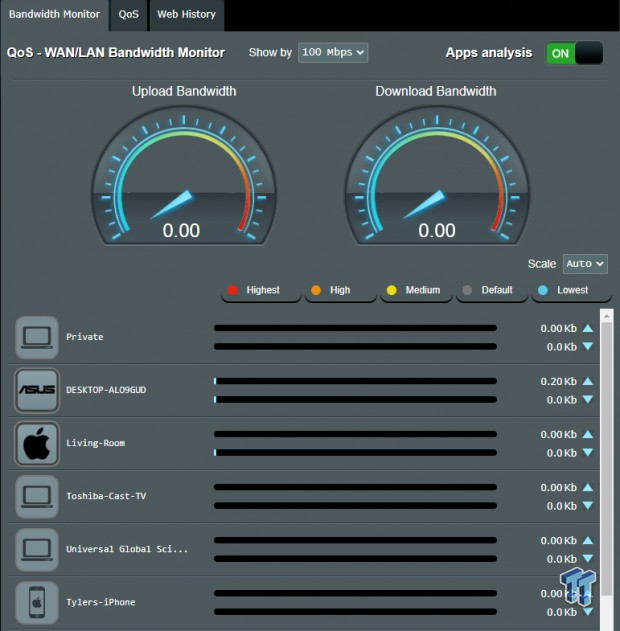 The Adaptive QoS screen offers insight per device, showing bandwidth used along with the ability to prioritize with QoS. 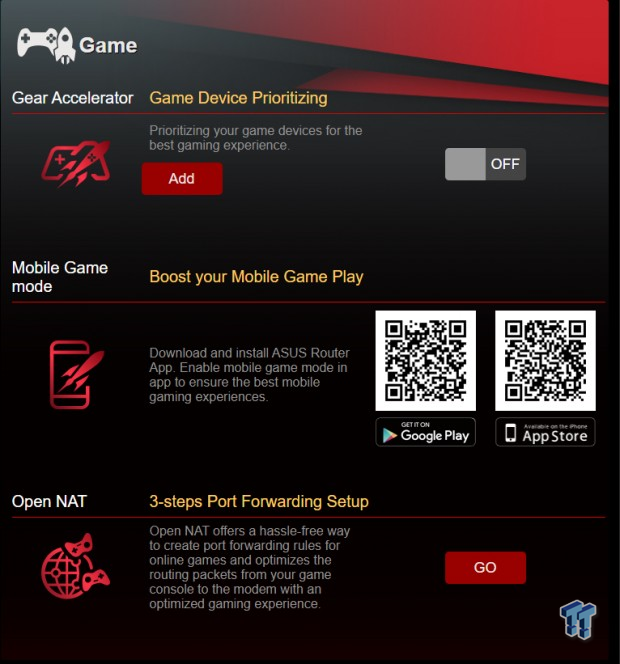 The "Game" menu offers control for boosting your mobile and PC/Console gaming experience by configuring port forwarding options or prioritizing PC, Consoles and Mobile devices to the router. 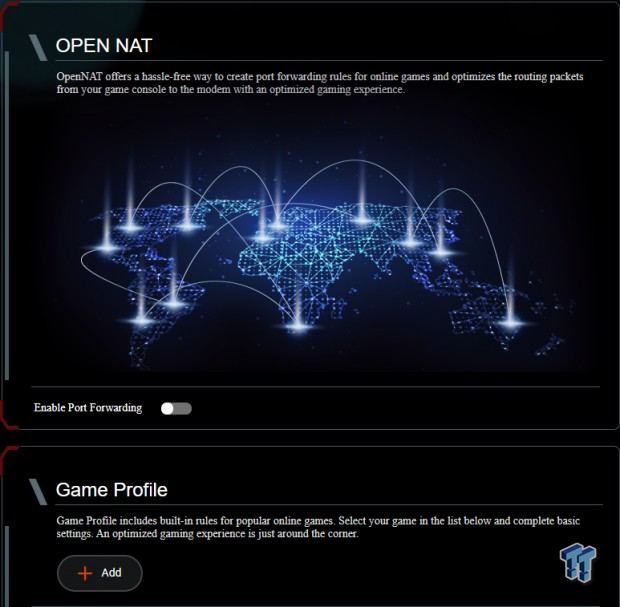 OpenNAT offers yet another way to make your gaming experience better by installing game profiles that include the appropriate ports for forwarding. 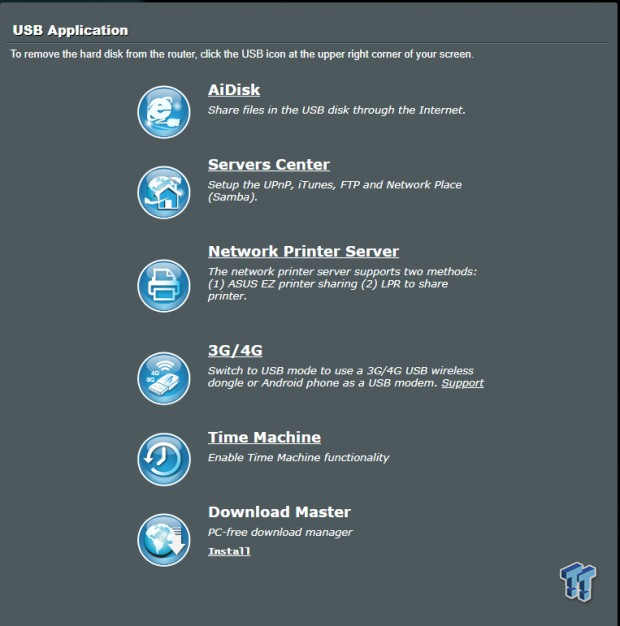 USB application is one of the many features that set ASUS routers apart from nearly all other platforms. Here we have support for storage with AiDisk and Samba, turn your printer into a network capable unit with printer server, or add a second WAN option with a 3G/4G dongle! 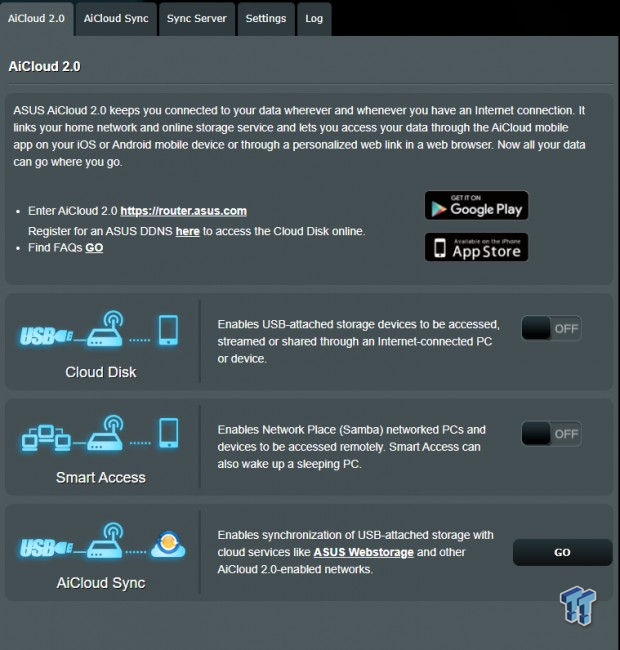 Adding to the AiDisk options is AiCloud that allows you to access your data on the go with Cloud Disk. 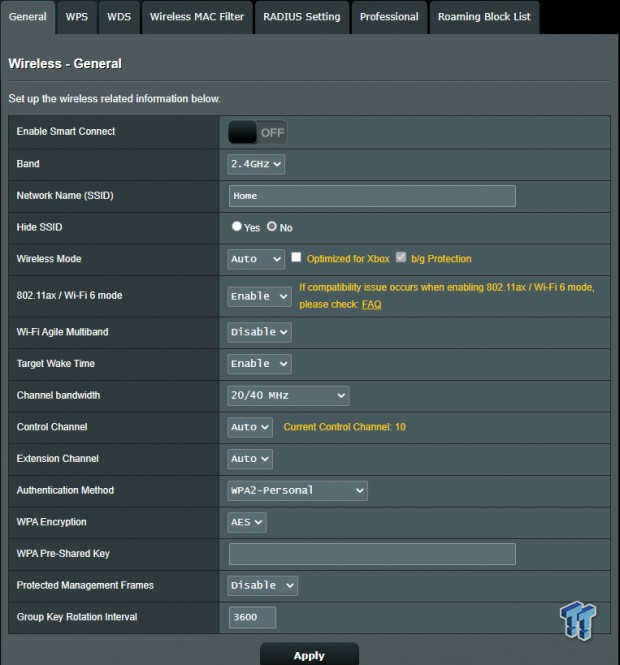 Last, we have the many options for configuring the Wi-Fi, including smart connect that moves devices to the appropriate band automatically. 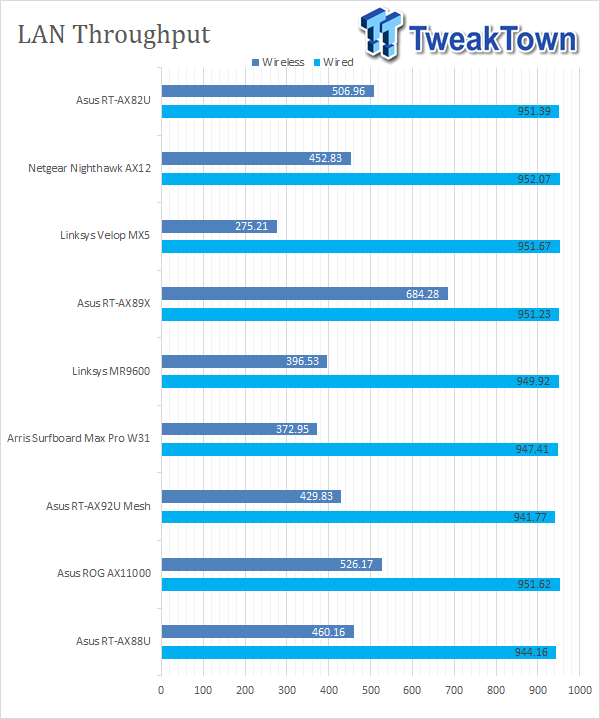 LAN throughput of the AX82U came in at 951Mbps for the wired test. Moving over to wireless to wireless connection, we were able to get 506Mbps through the router. 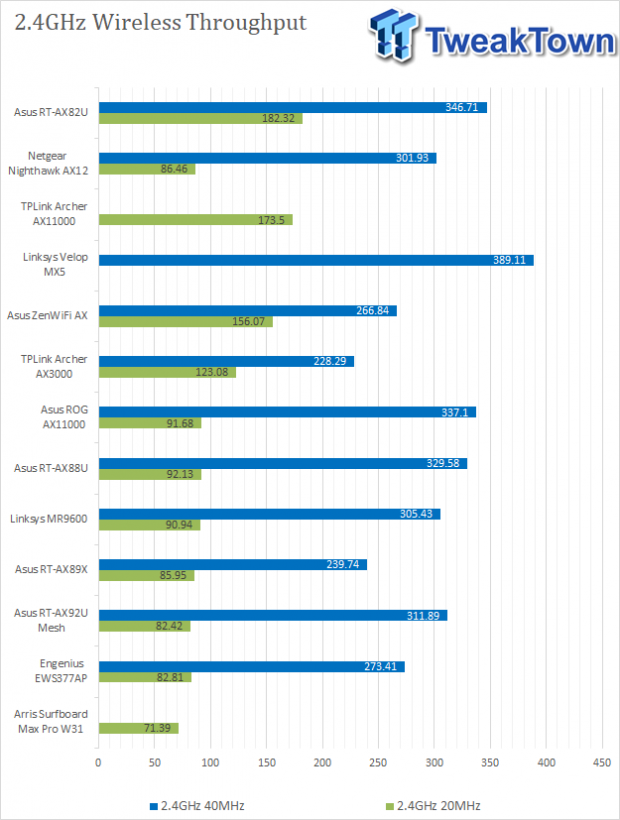 In our 2.4GHz testing, the AX82U did quite well, offering peak throughput of 182Mbps using 20MHz while moving to 40MHz channels we see 346Mbps. 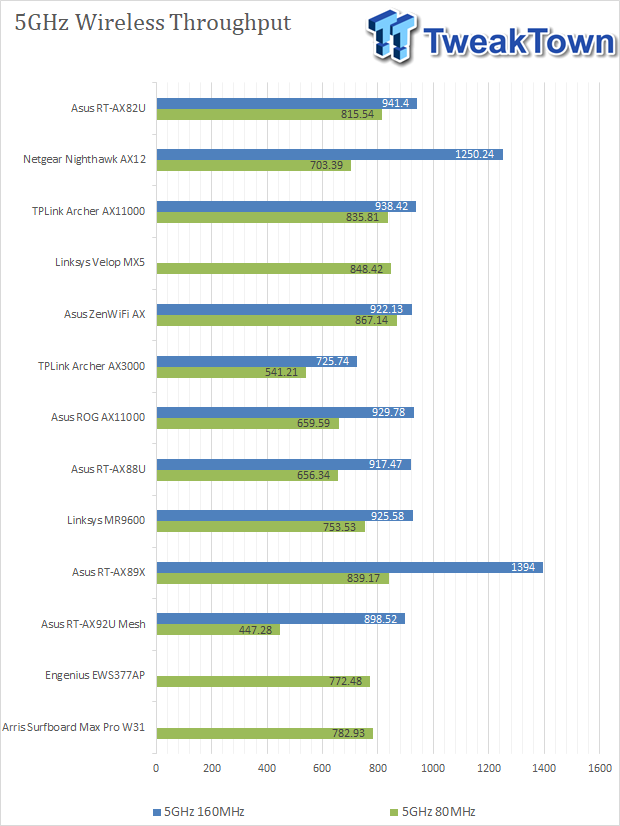 5GHz testing started with 815Mbps using 80MHz, and moving to 160MHz channels bumped up the performance to 941Mbps, the limit of the wired ports. 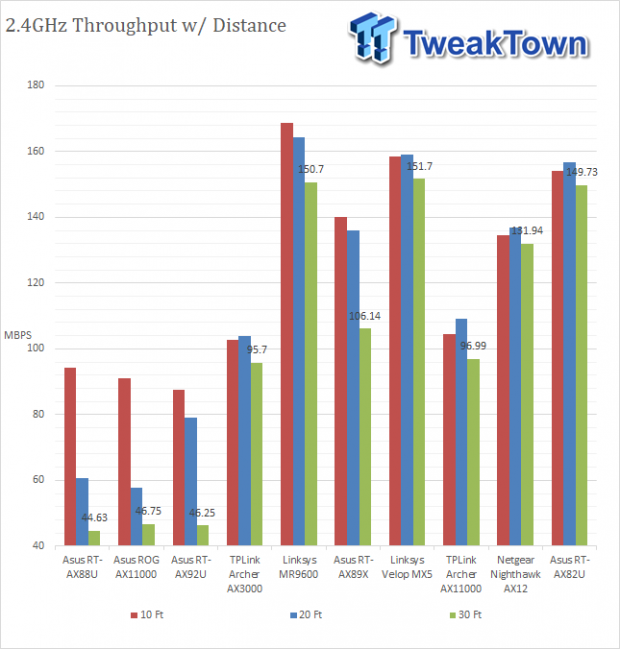 Switching from our dedicated test system over to our iPhone for mobile throughput testing, the AX82U produces a steady 149-150Mbps from 10ft to 30ft when configured with the 20/40MHz setting in the ASUS software. 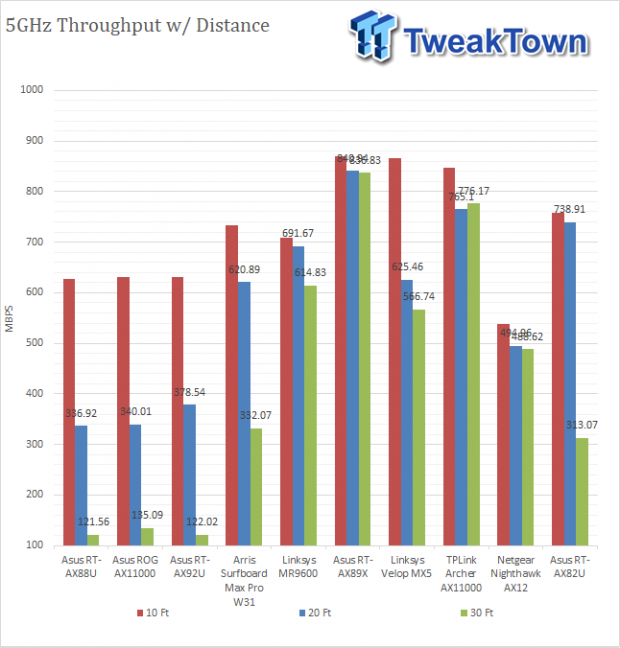 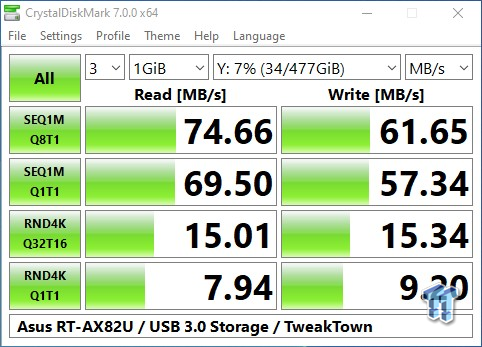 Testing the USB storage capabilities, we deployed a portable SSD and mapped it as a drive on our test system. Running CDM, showed 74 MB/s read and 61 MB/s write for the AX82U ample performance for a mainstream platform.

Wrapping this one up, the RT-AX82U offers a reliable Wi-Fi 6 platform for the mainstream with excellent build quality in both the chosen hardware and plastics. That said, the plastics while matte in appearance, something I like, do take on fingerprints and oils from your hands quite easily. The addition of an LED under glow is unique to the 82U in ASUS new lineup and is controllable from the WebGUI with Aura.

More on the chosen hardware, this new AX82U is unique, being the first platform I've had in my hands to use the 6750 SoC from Broadcom. When paired with the BCM43684, both radios in this solution are Wi-Fi 6e capable, making it possible ASUS could push a firmware update later in the year to enable the 6GHz band support.

Diving into the performance, the AX82U is slightly above average from what we have seen in testing. Our list of tested Wi-Fi 6 solutions has now hit somewhere around 15, so we are getting a better idea of what to expect from each router class. That said, you can expect wired throughput to be on par with the capabilities of Gigabit LAN at 951Mbps, 2.4GHz wireless on the 20MHz band is the quickest we have tested while 40MHz is top 3 at 346Mbps.

867Mbps is the highest performance we have seen on 80MHz 5GHz, and the AX82U comes right behind that at 815Mbps, moving to 160MHz we have seen some impressive routers push north of 1.2Gbps real-world, the AX82U is limited by it wired ports in our testing, so we topped out at 941Mbps.

On the software side, the AiMesh platform has been one of the more stable platforms I've tested over the last few years, and that extends to the AX82U, I had no issues with stability during my two weeks of in-home use and then stress testing for this review.

As for pricing, the AX82U is coming in at $299.99 MSRP which still isn't cheap by any means, but this is the sweet spot for features build quality and performance I feel because you get a fully capable 5GHz band with a 4x4 radio, though this model is missing multi-gig support.

With mainstream solutions slipping into the market, the AX82U offers excellent performance with the possibility of being compatible with upcoming Wi-Fi 6e standards later this year.