Our only complaint before was the lack of color options, and HyperX Pudding Keycaps more than fixed that sticking point! Loads more RGB illumination, wide compatibility, exceptional pricing, and longevity all combine to make the best keycap set we have ever tried!
Buy at Amazon

Those who have dove deep into custom mechanical keyboards know all of the haunts to find accessories and keycaps, and while we have seen and tried some creative solutions in the past, but once we had our hands-on the HyperX Double-Shot keycap set, to say we were impressed is a bit of an understatement!

However, HyperX was not satisfied with the first run of keycaps they offered, which brings us to why we are here today, as the keycap set not only takes on a slightly different name but this time around, the angle of attack for this version was to let even more light pass through the keycaps this time!

From what we see in the original set daily, as they have been on every keyboard we spent a lot of time with on our desk, and know-how well they worked, we are once again excited to see how this all plays out!

Rather than hiding what they were, with the original sets, HyperX has made a move to go with Pudding Keycaps this time. The set we have in hand is the HKCPXP-WT-US/G, which are white-topped keycaps, but they also offer a BK-US/G version, which is black-topped, like our previous kit is. Both models are set up for the English QWERTY layout and can cover a 104-key keyboard that sports "+" shaped stems on the switches.

Like in the original sets, the new Pudding Keycaps are made of PBT, done in a double-shot method, allowing for more RGB LED transmission through the legends and the sides, with a solid application of PBT on the tops. The font used is specific to HyperX keyboards, and the keycaps backed with a two-year warranty also come with a keycap puller to make your swap as easy as possible.

There are many locations shown on the HyperX product page where to obtain the keycaps, places like Micro Center, Amazon, and Newegg all make the list. For previous keycap sets we have had in the past, you can spend quite a bit of money, and a lot of the times, if double-shot, they are still mainly black, wherefrom HyperX, the Pudding Keycaps will cost you only $24.99 for black or white sets. Due to the popularity of the white set we have for you today, we see that they are currently unavailable, but that could change at any minute.

Had you looked at these last week, we found the black versions on sale at just $19.99, which is a steal! So little money invested in taking an ordinary mechanical keyboard with RGB LED backlighting into a whole new realm of RGB LED goodness! 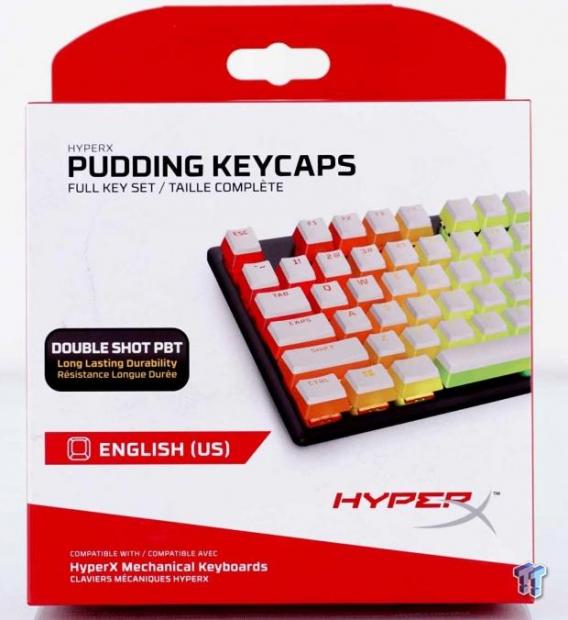 The packaging for the newer version of the HyperX keycaps is very similar to what we saw the first round, although, this time, they are called Pudding Keycaps. Below the product naming, we see them installed on a keyboard, with a notation of their PBT construction and another noting the font's language. While compatible with any HyperX mechanical keyboard, HyperX also states that the Pudding Keycaps will fit most mechanical keyboards with a standard bottom row. 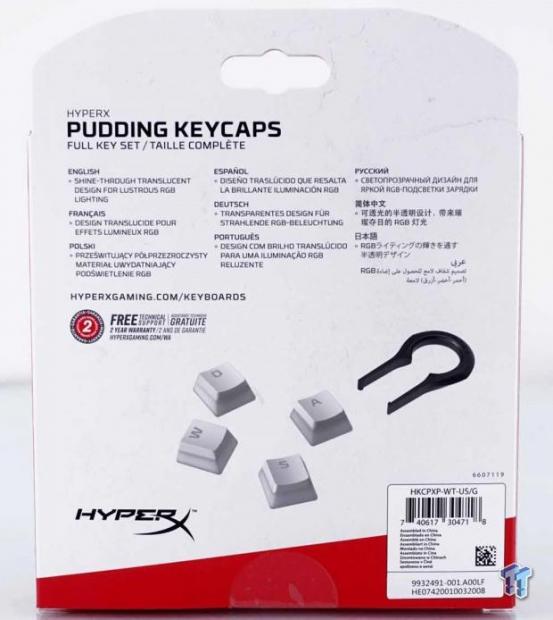 On the back of the packaging, we find the name topping the panel again, but this time followed by the best-selling feature, the shine-through translucent design for lustrous RGB lighting! The site information is listed to go online and look at these, just above the notation to the two-year warranty. The image shows us four of the white keycaps and the stylized plastic keycap puller, and the model number is presented in the bottom-right corner.

As we removed the product from the packaging, we also found this insert. When it is unfolded, you are given a 104-key layout for keycap placement. Most will not have the box for their keyboard as a reference, and like us, it is likely all of the original keycaps come off at once, leaving a sea of stems to set this new set onto. This information could be had online, but you may not realize until the keycaps are already off, hence the value in this simple sheet of paper. 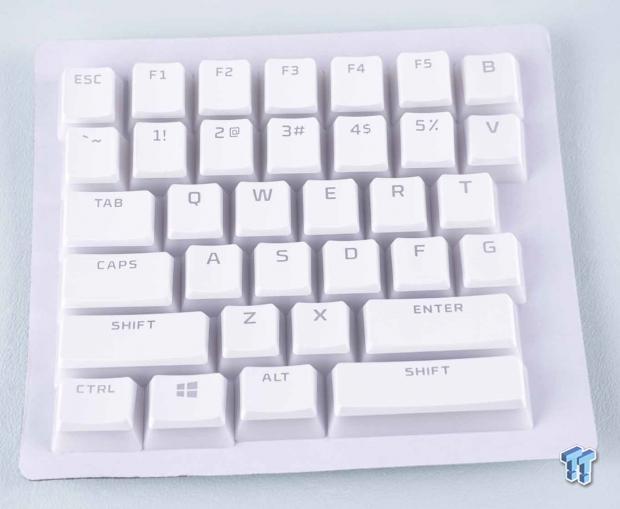 The keycap set is broken up into three sections, which are placed on a cardboard piece, and are shipped in something similar to a food-saver bag, which we removed as it got in the way visually. In this group, we have the left third of a 104-key layout, along with a few keycaps that end up on the right end of the keyboard. 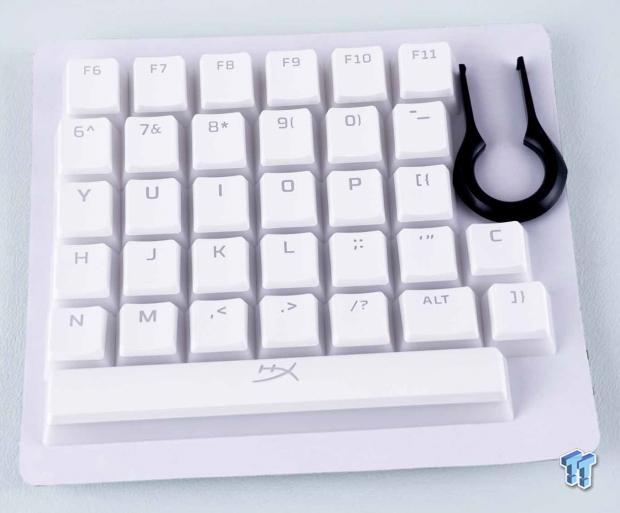 The middle group of the Pudding Keycaps has the same translucent sides and white tops as we saw in the previous image, but this time, there is the plastic keycap puller tool that says HyperX on it. Not the best idea, as these can scratch painted keycaps, but the PBT caps fare much better with the use of these types of pullers. 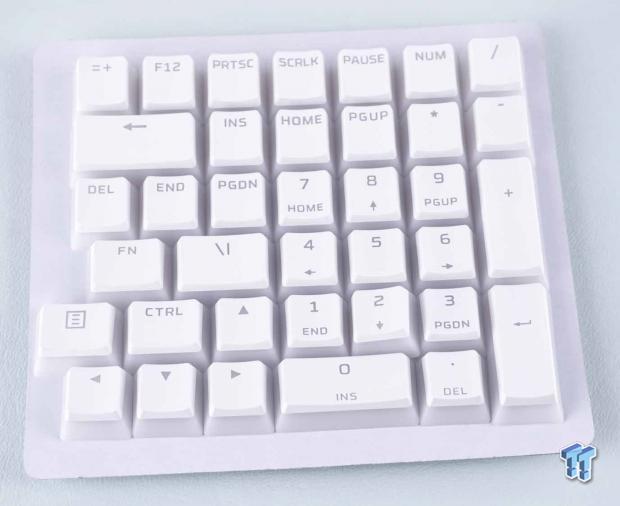 The last section covers the right third of a 104-key keyboard, and for those with a 60% keyboard or a TKL will not use all of these, but HyperX wants to make sure to cover all mechanical keyboard users' needs! Do keep in mind, the keycaps are not "stuck" to the cardboard, so once the bag is opened, the caps can easily slide off the cardboard. We had to be gentle to get everything out of the bag without much movement of the keycaps. 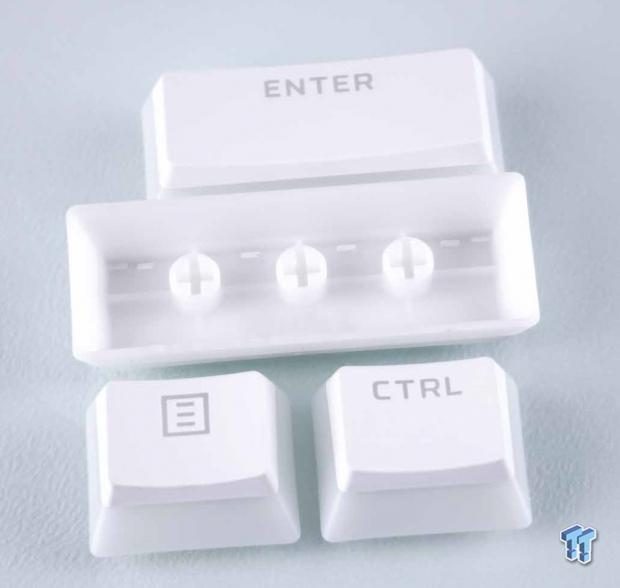 Unlike many of the standard keycaps, these are not a single while molded run that gets painted at the end. What we get with these is an initial molding of translucent PBT with the legends at the top. The second shot of PBT covers the tops of the keycaps with the white PBT, leaving the translucent legends. These let out a ton of RGB lighting, they also will last much longer, as there is no paint to wear off. Under the caps, we find the typical "+" posts under them to fit the HyperX switches, as well as Cherry, Kailh, and a few other makers. 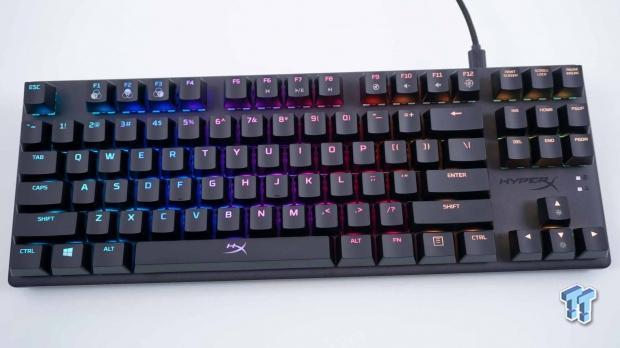 We wanted to ensure that potential customers get the full effect of what these keycaps bring to the table, so we powered up the Allow Origins Core from HyperX to show what many users see from their RGB LEDs, fresh out of the box. The legends are bright, and there is a flood of light onto the exposed metal frame, very typical of most RGB mechanical keyboards.

As a bit of a slow roll into what you are getting with this $25 investment, merely installing the keycaps makes a world of difference. We love the sterile white look of this version of the Pudding Keycaps, not that we do not appreciate the style of the original black set we still use, but there is no denying that this looks vastly different, in a positive way!

We wanted to show both the white tops of these Pudding Keycaps as well as the illumination in this image, but it is bright and does make it a bit tough to make out all of the legends. However, you can already tell there is a tremendous change to the amount of RGB goodness coming out of the Pudding Keycaps versus the original keycaps seen a couple of pictures ago. 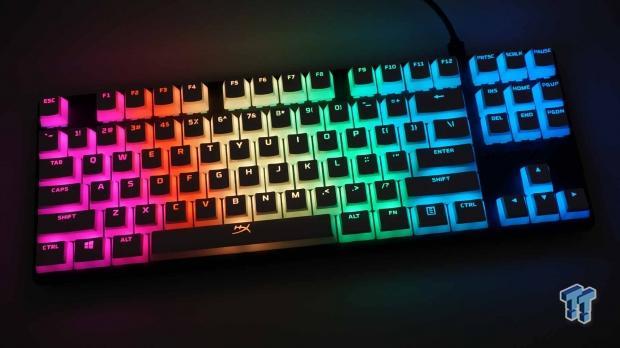 To give you a better sense of how the new Pudding Keycaps from HyperX will be seen by most users, we turned out all but one of the lights in the booth, and were amazed at what we saw! Since the white tops are not translucent, they appear almost black from the top, but the lighting shining on the sides now shows the color of the LEDs. We even see a halo around the keyboard of lighting flooding out from the keys, and even our monitor stand, at over a foot away, also takes on the flood of RGB LEDs, turning our entire desk into an RGB light show!

Starting with the Pudding Keycaps features, we love double-shot keycaps, mainly because we have tossed many a keyboard in our past due to paint wearing off the keycaps! We cannot say that you can never wear through the top layer of PBT, but we can say that it will take you a long time to try to do it! We had the option of black or white tops to the keycaps, and since we love our earlier black versions from HyperX, we had to try out the white ones!

Beyond the easy to read font used, beyond the nature of manufacturing this set of keycaps, the white tops are stunning, and will undoubtedly change the look of any keyboard. We did not think the change would be so dramatic but rest assured, any keyboard we migrate to with "+" stem switches, these caps will get swapped onto it!

The most significant selling point of the new rendition of Pudding Keycaps is that they designed these for more light transmission. Since we had the older version on hand, we installed a few and looked at it side by side. We do not have a fancy light meter, but if we had to guess, there is twenty to twenty-five percent more light passing through our new set!

The Alloy Origins Core has brilliantly bright LEDs anyways, but once we added the Pudding Keycaps, the difference is astounding! Even the feel is familiar since they are cylindrically shaped. The only downside to the Pudding Keycaps is that you will want more for any other RGB mechanical keyboard in the house that works with them!

As impressed as we are with the functionality, longevity, compatibility, and the glamourous light show that now comes from our RGB mechanical keyboard when we consider the cost, an even broader grin develops on our face. We have an excellent set of WASD keycaps, and we like them very much, but they also cost over $50 for what we got. Right out of the gate, HyperX halved that cost and has delivered us with the most impressive set of keycaps we have seen to date!

For those of you looking to add more RGB to the environment, want to spice up the overall appearance of almost any mechanical gaming keyboard on the market, and do not have a large budget to do so, the $24.99 you will pay is a small drop in a bucket of awesome! In our opinion, HyperX is killing it with the Pudding Keycaps, and should you be in the market for a set, we strongly urge you to consider these, they are just too good to pass by! 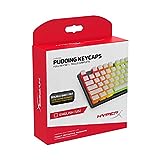 Our only complaint before was the lack of color options, and HyperX Pudding Keycaps more than fixed that sticking point! Loads more RGB illumination, wide compatibility, exceptional pricing, and longevity all combine to make the best keycap set we have ever tried!