Today we are looking at an entry-level gaming headset from Sennheiser, the Sennheiser GSP 300.

Throughout this review, we will be running through all the features that come with the GSP 300 to see if it's worth picking up for your gaming setup. We will be breaking down all of the physical characteristics of the GSP 300, the sound quality in games/music, the comfort, and of course, the microphone. The GSP 300 comes in at a price of $99 and is a wired gaming headset that comes with noise-cancellation.

The GSP 300 can also be used with the PS4, Xbox One, Nintendo Switch, and mobile, making it an extremely versatile headset for only $99. My first initial impressions of the GSP 300 upon opening the box and putting them on were good, but as I continued to use the GSP 300, my thoughts only got better and better. Let me explain to you why, but first, let's jump into a close-up of the GSP 300. 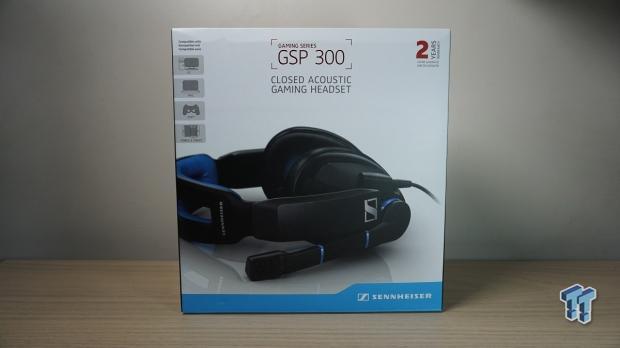 First off, we have the front of the box, and as you can see, there is an image of the GSP 300 with some nice simple white packaging. We can also see that the GSP 300 is a "Closed Acoustic" gaming headset, which is another way of saying noise cancellation. The GSP 300 is also compatible with PC, Mac, PS4, and both mobile and tablet. 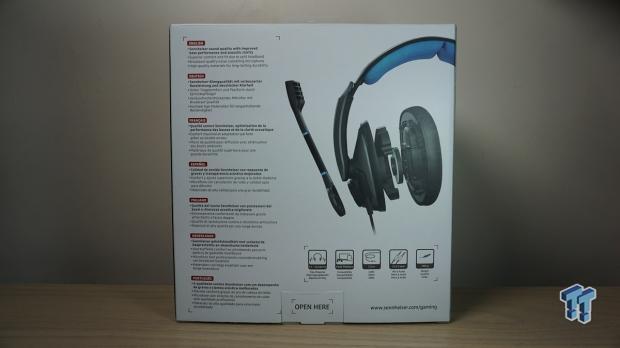 The back of the box has an image of all the technology inside the headset, as well as some of the features that come with it. 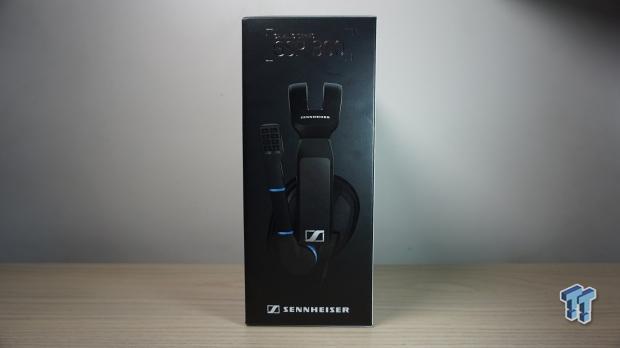 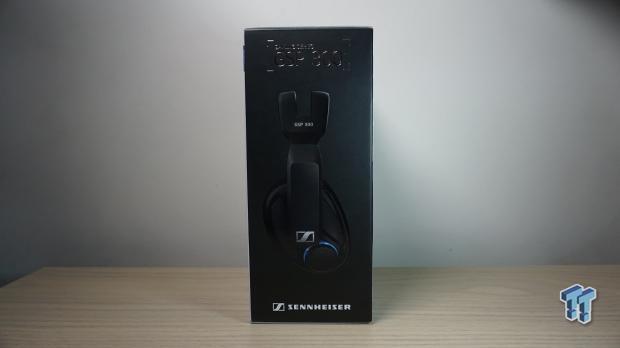 This is the left side of the box, and as you can see, it finishes off the overall image of the GSP 300's very well. 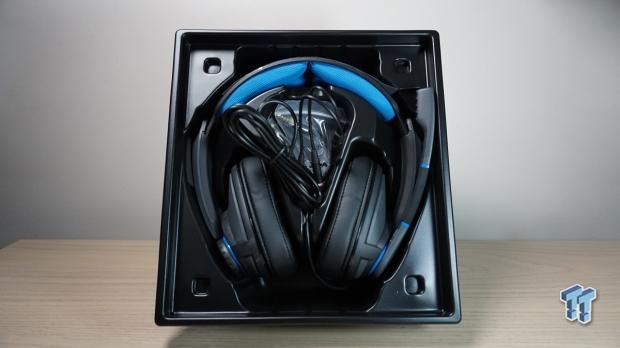 Here we have an image of the GSP300's in the packaging, and we can see that Sennheiser has opted for some black shell packaging that holds the GSP 300's tightly in place. The packaging is not fancy, but it's simple and effective, and about what you would expect for a $99 headset. 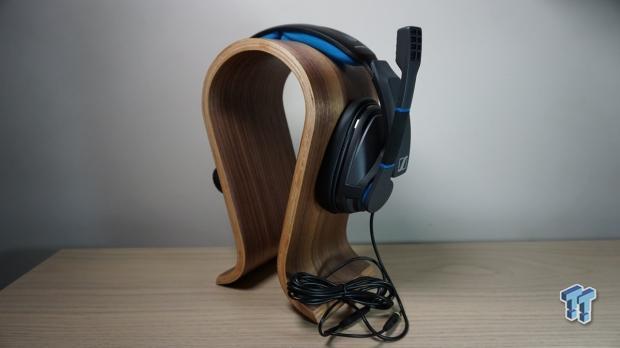 Here we have an image of the GSP 300's outside the box, and as you can see, the cable isn't detachable and features a 3.5mm headphone jack and microphone jack. 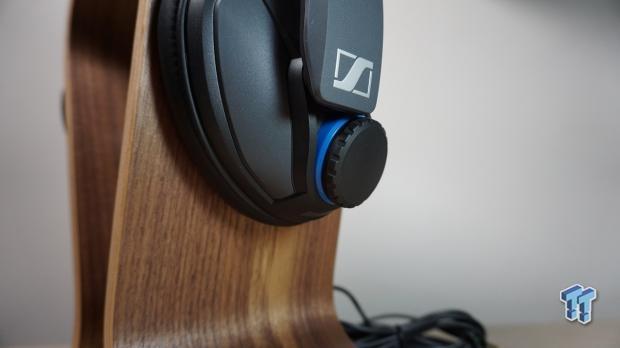 Moving onto the right-hand side earcup, we can see that Sennheiser has equipped the GSP 300's with a really nice blue and gray color style. We can also see the volume wheel, and I can say that it has really nice tension, but at the same time, its also silky smooth to use. It's probably one of my favorite volume wheels on the gaming headsets I've used. 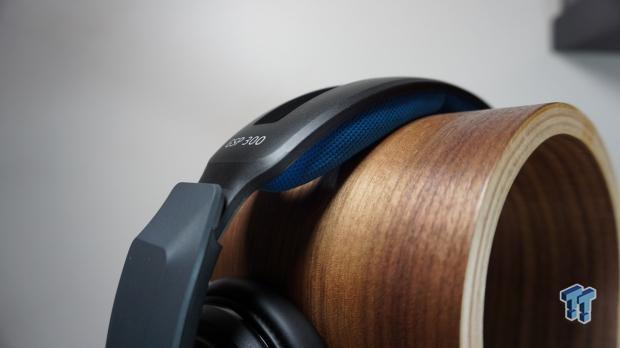 Onto the top of the headset now, the GSP 300 features really strong and sturdy plastic that is equipped with some nice cushions. These cushions are very soft on press and have a nice bounce to them. They gave me no issues at all through my experience. 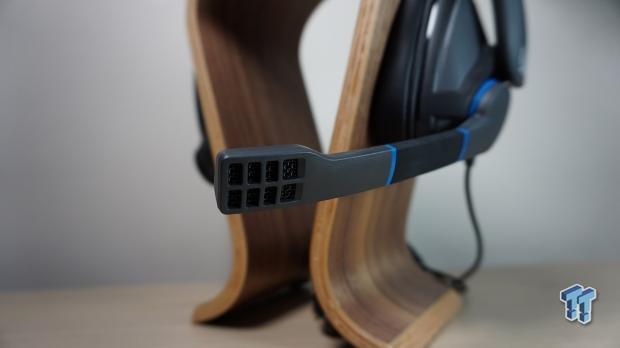 Here's the microphone, and as you may have seen from the previous images, it's quite large and bulky, especially the end of it. Another issue with this microphone is that its barley adjustable. I will get more into this later. 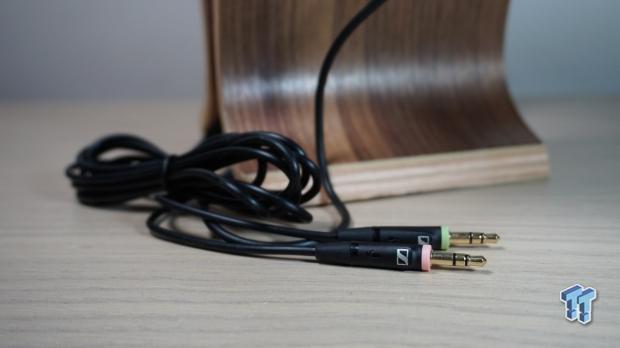 Above we have an image of the microphone jack, and the 3.5mm jack. 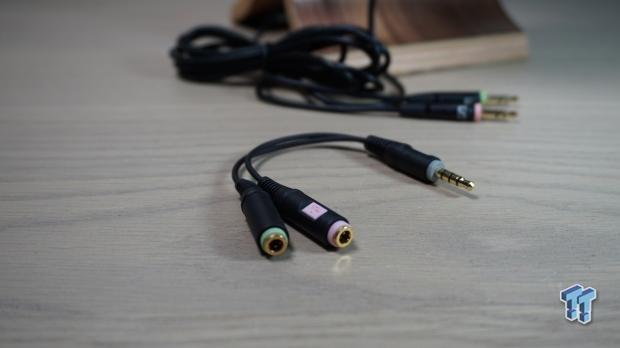 Sennheiser has also included a combo audio adapter so the GSP 300's can be used with mobile and consoles. 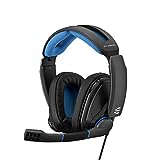 Sennheiser has kept things simple with the GSP 300, and that is what I love about it. While there isn't anything too flashy feature-wise, the things that it does do it does extremely well. This is really important when looking at a $99 headset because there are plenty of competitors at this price point. But if a headset company can nail the features down with a cheap and affordable headset that stands above the pack, then they have truly down something special. Sennheiser has done that very thing with the GSP 300's, and it starts with its design. 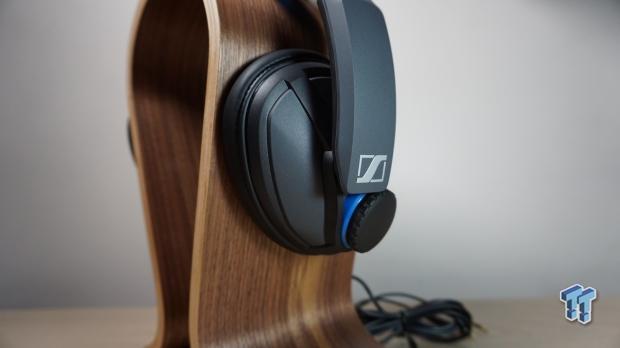 The GSP 300's are sporting a nice black, dark grey and blue color finish that really matches well together. As for the build quality, it passed all the stress tests I put it through, which were twists and turns, as if it was in a bag, or performing the classic rage throw in the event of not responding well to a gaming experience. Due to the headset being constructed of plastic, it weighs in extremely lightly at only 290g. The combination of the weight of the headset with the clamping pressure makes for an extremely comfortable headset that is really good for long gaming sessions.

The cushions are soft-leather and are really quite comfortable. They have nice plush leather and have a really convenient ear-shaped design. This design is fantastic as it makes the cushion mold to your ear more, which then stops all sound leakage, and overall increases the audio experience when using the headset.

Some of the downsides of the GSP 300 are that you cannot remove the cable and that the microphone design doesn't allow for a user to bring the microphone close to their face. There is also the issue of the headset looking somewhat wide and bulky. I'd imagine this probably wouldn't be an issue for most people, but for those that are specific about their headset designs, I just thought I'd be worth mentioning.

Other than those small problems, the design of the headset is extremely well thought out and put together. As I mentioned above, sometimes it's best to keep things simple and absolutely nail them, and I feel as if that is what Sennheiser has done with the GSP 300's.

As with all of my headset reviews, I like to use whatever headset it is that I'm testing from anywhere between 30-50 hours. Within this time frame, I test the headsets gaming capabilities, music listening experience, movie listening experience, and generally gather my overall thoughts about my entire experience with the product. My first initial reactions with the GSP 300 was very positive, and I believe yours would be as well, let me tell you why.

Upon plugging in the GSP 300's, I immediately jumped into a game of Apex Legends. While Apex Legends might not be the best game to test audio in, it does have a very wide range of sounds, as well as being an extremely popular game. My experience with the GSP 300's after several games of Apex Legends was very positive, and more importantly, it did not feel as if I was using a $99 headset, but something more expensive.

Since the GSP 300's are closed-back, the bass was very amplified, but not to the point that it overwhelmed the mid or high frequencies. The bass sounds nice and tight, but still had a somewhat deep punch to it, and that is something I really love in a gaming headset as a common problem with a gaming headset is a lack of fine-tuned bass.

As for the mids and highs, the GSP 300's didn't drop the ball there either. Mids seemed to be somewhat reserved as I struggled to hear enemy footsteps, but I believe that the reservation of the mids causes the soundstage to widen, which could be a benefit in some scenarios. The clarity of the highs was very impressive as well, especially for a $99 headset. Overall, Sennheiser has done an absolutely incredible job for the GSP 300's and for its price, I believe it's a top competitor in the market.

I listened to a couple of movies with the GSP 300's, as well as tens of hours of music while I was at the gym. Usually, a gaming headset falls off when it comes to music/movie listening, but surprisingly, the GSP 300's held its ground. The audio quality was more than acceptable, and the fact that the headset has such a tight clamp around your head made for the experience to be quite immersive. I believe if the GSP 300's didn't have this snug grip, it would diminish the audio experience as the punchiness of the bass would be lost, thus affecting the listener's overall experience. 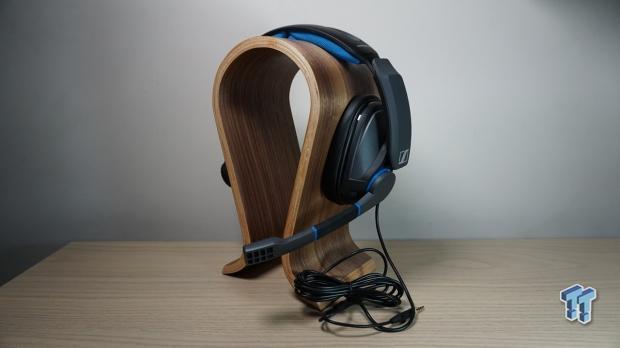 Getting a good microphone on a gaming headset is a must for me, and when the microphone lacks quality, it can certainly be a deal-breaker for gamers. This is why when you find a microphone that has solid quality, and compliments great audio, you've found a winning headset. Sennheiser's GSP 300 is no exception to this rule, and actually stands as an example of it.

Packed into this $99 headset is a fantastic microphone that only has some small and very few downsides. The volume pick on the GSP 300 is quite low, making it difficult for the users' voice to be registered. That issue, combined with the microphone arm being difficult to position, can make for a user's voice to be quiet. The quality of that voice though, is extremely clear, and there are very nice levels of detail and clarity.

My other only complaint would probably be the lack of bass in the voice, I would have liked to be a tad deeper, but this was easily solved with a quick boost in properties. Other than those two issues mentioned, the GSP 300's are equipped with a very competent microphone that I feel any gamer looking for a headset in this price range would be more than happy to use.

Sennheiser has encapsulated almost all things that are great about a gaming headset, and squeezed it all into a $99 product. The GSP 300's have awesome comfort, great sound, and a fantastic microphone.

So what is bad about the GSP 300's? Well, there aren't that many bad things about it, but if I had to cherry-pick some aspects about it, I would say that I wished the microphone had a better volume pick up. On top of that, I would have liked to see a much more flexible microphone arm, and perhaps the option to remove the cable and microphone.

Sennheiser has done some incredible work with the GSP 300's, and the most incredible thing about has to be the price. 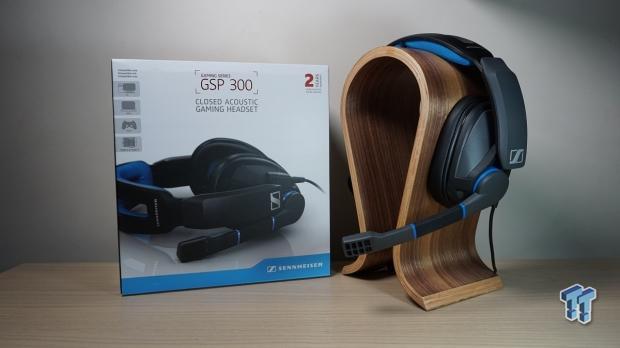 The price of GSP 300 is what makes all of its other features just that much better. For $99, buyers will get a comfy, tightknit, gaming headset that has a more than an acceptable microphone. Do I recommend the GSP 300's? Most definitely. If you are after a gaming headset and you only have $100 to spend, you should, without a doubt, consider picking up the GSP 300.

If you are an audiophile and are after a fantastic audio experience, you probably aren't going to get it for $100 in the gaming headset market. But if you are a gamer, and are looking for a headset that will work for all gaming genres, then the GSP 300's might be your next pick up.

Sennheiser should be proud of what they have achieved with the GSP 300's, and out of the headsets I've reviewed, I can say that the GSP 300's are certainly a contender for the best headset at their price point.

For $99, Sennheiser has created an absolutely fantastic gaming headset that stands as an example that even entry-level gaming headsets can come with awesome audio and a great microphone.