If you remember back to CES 2020, Elgato teased a brand new project they were working on, and it was called Project WAVE. Project WAVE is now here, and it comes in two forms WAVE 1, which is what we will be looking at today, and WAVE 3.

From the teaser, Project WAVE caused many fans to speculate that the capture card company was working on entering the microphone market. Those speculations were correct, and Elgato has just jumped into the microphone market with two brand new products; WAVE 1 and WAVE 3. Today we will be taking a dive into WAVE 1, the cheaper of the two variants coming in at the cost of $129.99.

Here's a quick introduction into what WAVE 1 is. WAVE 1 is a condenser microphone that comes fully equipped with Stream Deck support, and its own digital audio software. While that is an extremely brief introduction to the microphone, it should be mentioned that Elgato has designed this microphone specifically for content creators and streamers. So, you could probably imagine all of the bells and whistles that Elgato has thrown into their brand new product line. 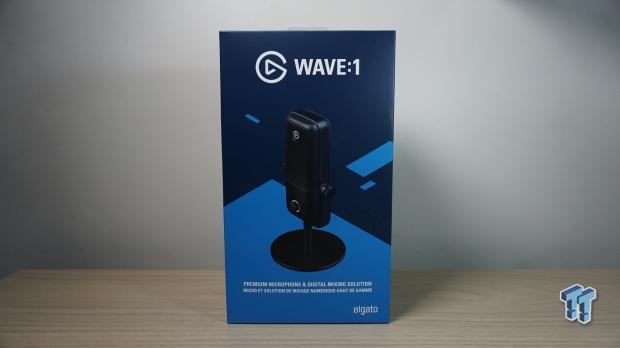 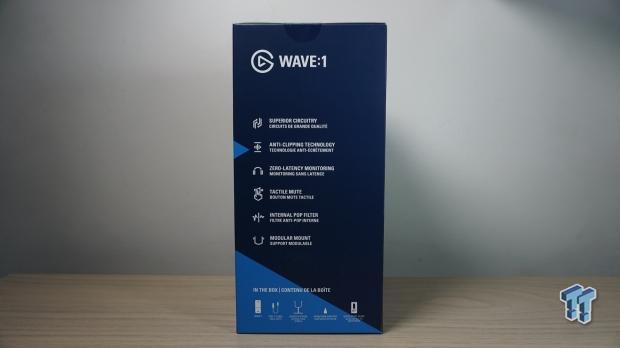 Moving onto the side of the box, we can see some of the features that come with the WAVE 1. 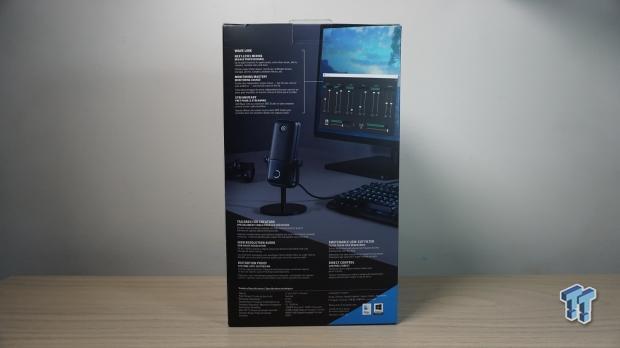 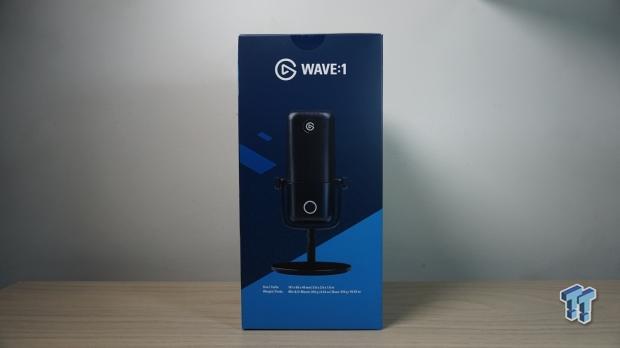 The final side of the box is a simple image of WAVE 1, and it shows the dimensions and weight of the microphone. 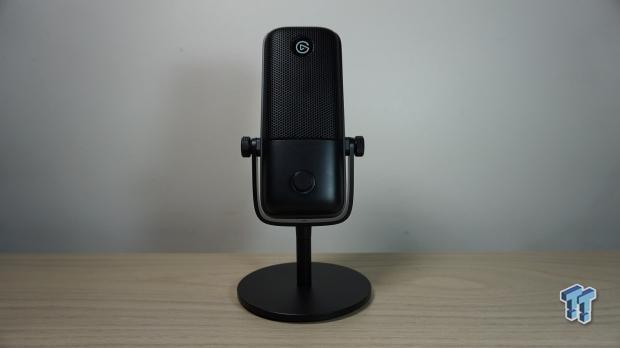 Here we can see an image of the WAVE 1 outside of its box, and we can see that Elgato has gone for a nice sleek all-black look with the WAVE 1. The only branding that appears on the microphone is located right at the top with the Elgato logo. 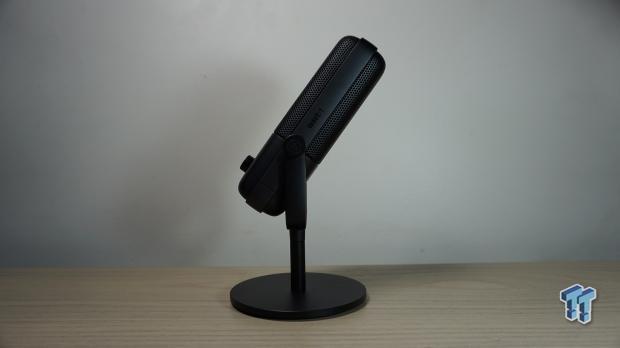 Here we can see a side-on view of WAVE 1, and we can notice the wide stand that comes with it. There's also the subtle WAVE 1 naming that appears on the spine of the microphone - I really love that touch. 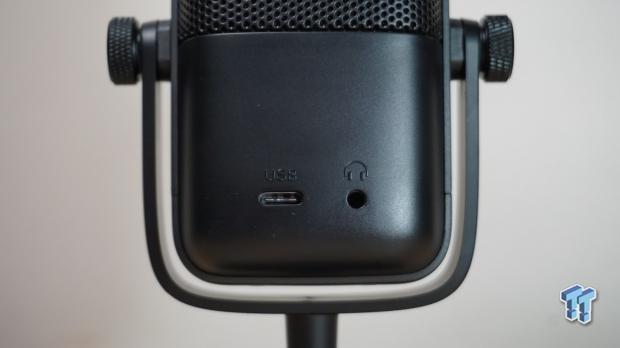 Moving onto the back of the microphone, we have a USB-C port, and a 3.5mm mini-jack/direct monitor port. It should also be noted that the WAVE 1 can be unscrewed from the stand that it arrives in and attached to a boom arm via the provided screws. 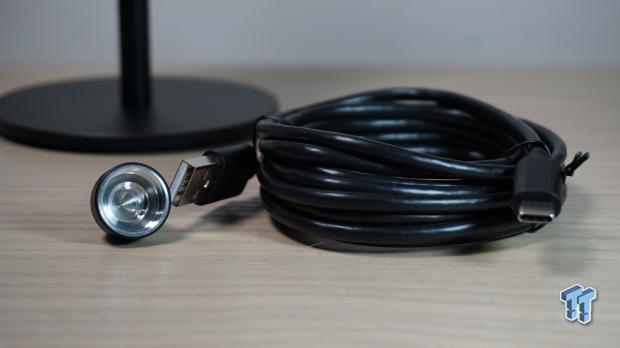 Here we have an image of the accessories that come included in the WAVE 1 packaging. There's the USB-C to USB-A cable and the boom arm adapter. It should also be noted that WAVE 1 comes with a quick-start guide to make setup really easy.

As I mentioned in the introduction, Elgato teased the Project WAVE back at CES 2020, and since then, people assumed that the company was working on a new streamer microphone. Now it's here, and it does not disappoint. 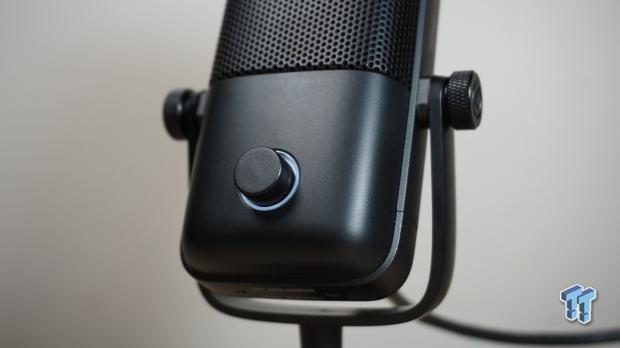 The design of WAVE 1 is extremely simple, and simplicity is something that Elgato does really well throughout all of their products. The WAVE 1 is equipped with a desktop stand for users who don't have a boom arm to equip it to. The stand is considerably heavy, making the microphone quite difficult to knock over. Having a really nice weighted base also reduces vibrations being picked up by the microphone, which can come from the user typing, or moving objects around on their desk.

The frame that the WAVE 1 is sitting in is also made of metal, and is extremely sturdy. Elgato has done a great job at making the microphone be really secure in the stand, which means users won't have to worry about any parts breaking off, or snapping. As for the microphone itself, it's also built very well. It has a nice tough outer shell, and is reinforced with a spine running through its middle, which adds to its overall robustness.

Elgato has debuted its brand new software with the WAVE 1, introducing the WAVE Link software. WAVE Link is a digital mixer, and if the WAVE 1 microphone were the strawberries, WAVE Link would be the cream. Together, WAVE 1 and WAVE Link complement each other perfectly, and if you didn't already guess - yes, Elgato's microphone and software are completely supported with their selection of Stream Decks. 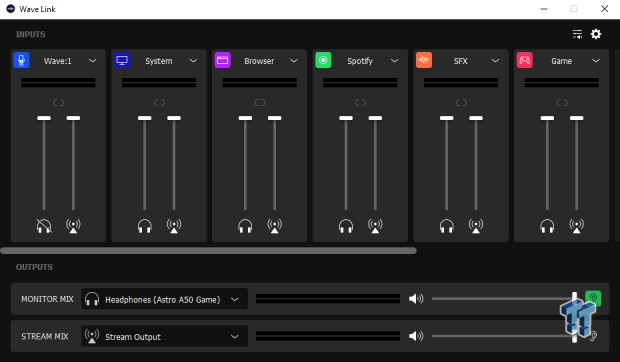 Above is the first screen users will see once they have downloaded and installed the WAVE Link software. What we are looking at here is a digital mixer, which is basically a hub for controlling audio inputs and outputs. WAVE Link works in tandem with the Windows Sound Settings, and allows for users to adjust the gain levels of the WAVE 1, adjust the headphone volume levels, change volume levels for channels, and more.

The WAVE Link software enables users to filter their sounds through specific channels. For example, if I was streaming and wanted to reduce the volume of music I was playing the background, I can simply run my music source through one of the provided channels and simply reduce the volume using the level inside the WAVE Link software. The same principle goes for game volume, voice chat, system sounds, sound effects, and more. 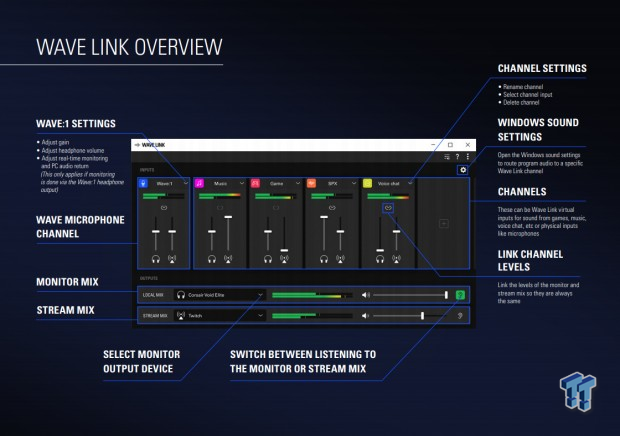 Users can also select what audio input they want to hear through their headphones/speakers. This can be simply done by selecting/deselecting the headphone icon in any of the channels. For example, if you wanted to have your stream viewers listen to music, but you didn't want to hear the music, you can simply mute that audio input from playing in your headphones, while still outputting the sound to your stream viewers. Again, the same principle applies to any of the programmed channels.

So, how do you set up your WAVE Link? Well, it's actually easier than you might realize. 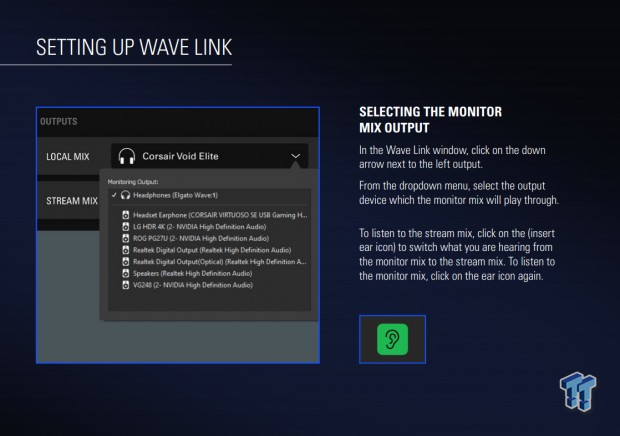 Above we have a slide from Elgato, and they explain how to get audio routing through WAVE Link and to output to your device. 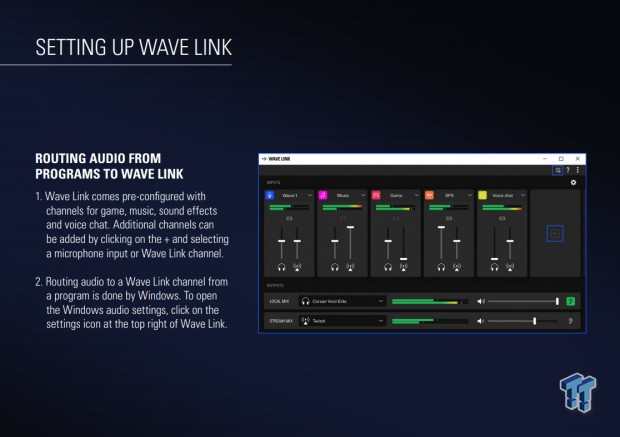 In this slide, we are looking at how to get audio from specific programs to route through channels. Examples for this include games, music, sound effects, and voice chat. Audio routing from programs isn't done through WAVE Link, but through Windows (see next slide). 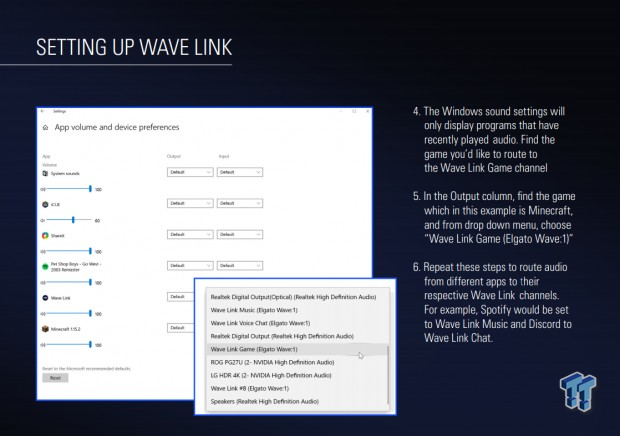 Here we can see what WAVE Link looks like in the Windows output device tab. Clicking on the little icon in the top right-hand corner of the WAVE Link software will open the 'App volume and device preferences' tab in Windows. Here you can change specific programs to output their volume to specific channels. Looking at the slide, we can see that the user wants to output the game volume from Minecraft to the Game channel created in the WAVE Link app. Doing this will allow the user to control the volume of Minecraft independently of all the other sounds on the PC. 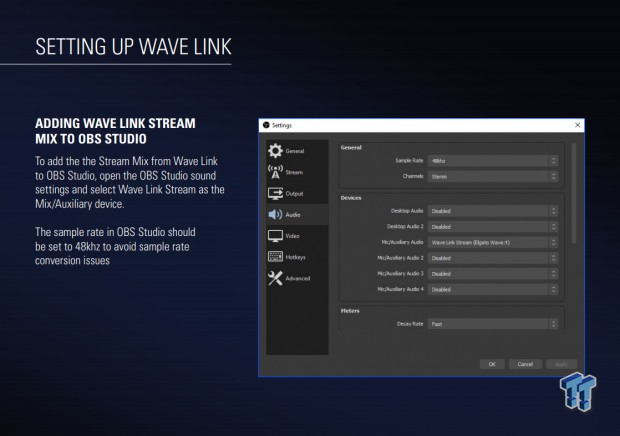 WAVE Link Stream Mix can be used with Open Broadcaster Software (OBS), and that can be simply done by opening up OBS, locating the sound settings tab, and then selecting Wave Link Stream as the Mix/Auxiliary device. To avoid any issues, set the sample rate to 48khz, and make sure it's the same in Windows as well. 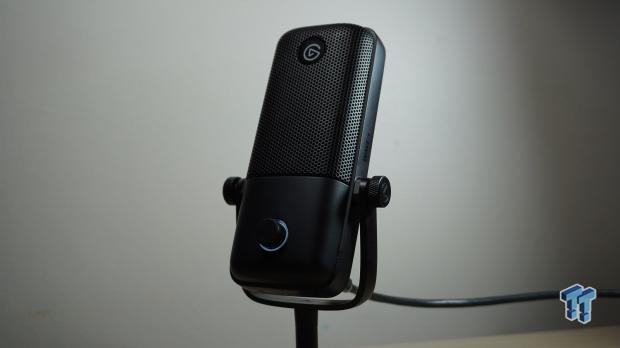 To test both microphones, I placed both exactly 15cm away from my keyboard, which is about the distance a gamer would place the microphone if he/she were using it in its desktop stand. To gauge which microphone sounded better, I performed the exact same test, which was typing out a paragraph using my Corsair K95 RG Platinum RGB with CherryMX brown switches. Keep in mind, my whole test was with Cherry brown switches, and both microphones kept at stock settings. So, depending on your keyboard/audio setup, the results may vary. With that out the way, let's get into what I found.

So, I tested three microphones, the Razer Seiren Emote, Elgato's WAVE 1, and the ASTRO A50's. The reason I decided to include the ASTRO A50's was to give readers a nice comparison between the quality of a headset microphone, and a desktop microphone.

From the recordings, you can hear clear differences between each of the microphones. For me, the Razer Seiren Emote sounds much more hollow, and also picks up on keystrokes a lot more than the two other microphones. This was an issue I pointed out in my review, which can be found here.

As for WAVE 1, I believe this microphone rained superior over both the ASTRO A50 and the Seiren Emote. The ASTRO A50 sounded very compressed compared to the other two, and my voice appears to have much more static behind it. This is expected from a headset microphone that comes with noise compression. 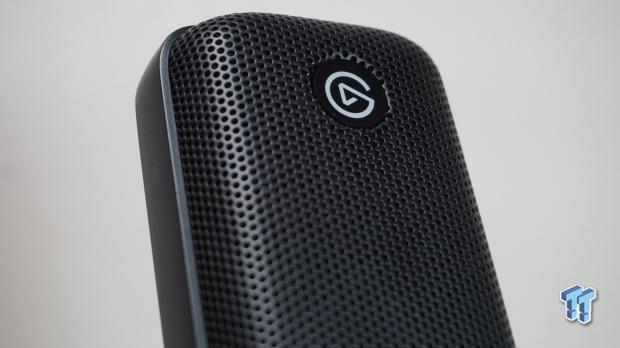 The WAVE 1 proved very well in the microphone test, and even though keystrokes could be heard, they were much quieter than I initially expected. I also tested the WAVE 1 in Discord and found that even at stock settings for both Discord and the WAVE 1, that my keystrokes weren't being picked up. This wasn't the case for the Razer Seiren Emote, and something I truly applaud Elgato for doing.

It should be noted that all of these microphone tests were done at completely stock settings, as I wanted to test each of them as "plug-and-play". With that being said, I believe each of the microphones has room for improvement via their respective settings, e.g. gain, compression, etc.

The Elgato WAVE 1 is a really simplistic microphone that has an awesome design, fantastic audio quality, and software that is specifically designed for content creators and streamers. The software is truly the magic part about WAVE 1, and personally, I believe it makes the microphone a lot better than if Elgato released WAVE 1 standalone.

There aren't that many things about WAVE 1 that I didn't like, but if I had to choose some improvements, I would say give users a quick tutorial of the software once it opens. Doing this would enable new streamers/content creators to be able to learn the software much faster than just figuring it out on their own. You could also argue there is a lack of controls on the physical device of the WAVE 1, but Elgato has saved those for the WAVE 3.

Elgato has stepped into the microphone market with a fantastic entry-level desktop microphone. I think they have truly changed the microphone game with the introduction of the WAVE series, and here's why. 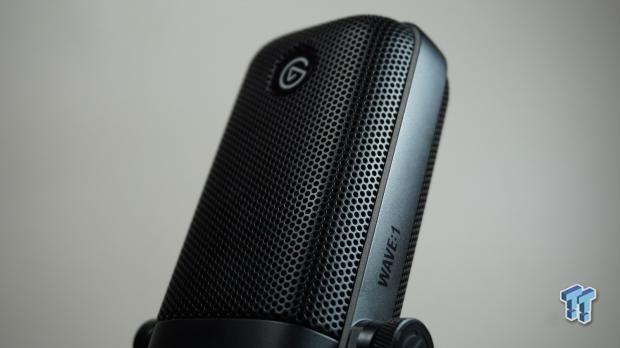 WAVE 1 sits at a price of $129.99 MSRP, which is far below the price of the Razer Seiren Emote. The WAVE 1 is already a better microphone than the Razer Seiren Emote, and it comes with software that completely complements the device and its purpose. I believe that gamers who are looking to get into streaming and aren't looking to spend a ridiculous amount of money on an audio setup will now have an alternative option that will fit there need perfectly.

Out of the microphones I've tested, the WAVE 1 stands as the best entry-level desktop microphone I've used, and I won't be surprised if either the WAVE 1, or the WAVE 3 become the staple for an entry-level microphone for the streaming industry.

Elgato, if you read this, be proud of what you have achieved with Project WAVE. Almost every product release from you guys makes the world of streaming more accessible to countless gamers. If that was your goal with Project WAVE, consider it achieved.

For $129.99, Elgato has made a massive splash in the microphone market with the WAVE 1. WAVE 1 packs features and the software to be any new streamer or content creator's next microphone pickup.