First off, let me start by saying that the main flaws with the G935 are on the design of the headset and not the performance. So, if you are after a wireless headset that has great performance and you don't care about the design at all, skip this part of the review and head down to the performance section.

Now, what is wrong with the design of the G935? Well, if you didn't already tell from the above images, the headset itself is extremely bulky, and when you are wearing them, it's very, very noticeable. Logitech decided to go for a glossed plastic for some parts of the headset, and this makes me ask 'why?' because as soon as I take the headset off and put it back on again, there are fingerprints all over the glossed areas. Logitech also decided to implement some RGB lighting, but decided to put it on the back of the headset? Who can see this cool RGB lighting? The user cannot see it, and if the user is streaming some epic gameplay, the viewers can't see it either. So what is the point of it? The G935 also has some problems with weight distribution. Since the headband comes out from the front of the earcup users have to place the G935 closer to the front of their head to compensate for the weight of the earcups. This can be quite uncomfortable and something that took me a few hours to get used to moving onto the left earcup. The left earcup is where all the action is as it features three programmable keys, the wireless power switch, volume wheel, and the mute microphone button.

So what's the issue here? The programmable keys are absolutely useless. The only thing I could think of that I wanted to program one of the keys to was space bar, and this would be for when I was laying in bed watching YouTube or a movie and wanted to pause the video without getting up. Other than that, I couldn't think of any legitimate use case. The mute microphone button also feels useless as the microphone automatically mutes when you raise the microphone past the halfway point. The volume wheel is extremely sensitive as well, and at times I would accidentally touch it and kill the volume of my game.

So what are the positives here? Well, the G935's are extremely comfortable, and once you get used to the weight of the headset, you will enjoy wearing them. They also have great padding on the earcups, and they didn't give me any grief at all when I was wearing them for upwards of 5+ hours at a time. I also really love how the microphone mutes when it's raised past the halfway point. This feature will be absolutely loved by people who are in loud environments and have to constantly mute their microphone. On top of that, the end of the microphone glows red when it is muted - a great touch.

Personally, I'm not the biggest fan of the design choices that Logitech made with the G935. I find the headset to be far too bulky, while also having an off-putting weight distribution problem and plastic that shows all of my attempts at trying to fix it. Not to mention the pointless RGB's...

Phew, now that the design is out of the way, we can move onto the good sides of this headset, and to start that off, we have the software. Logitech has absolutely killed it with its software, and here's why - usability.

Logitech's software, and if you don't already have it downloaded and you happen to own a Logitech product you can download it here. It's one of the best pieces of peripheral software on the market. Here's why: Clicking on the G935, we are first introduced to the lighting section of the headset. Here you can customize those RGB's that are on the back of the headset. You can change the color effects from static to breathing, to cycle, and of course, off. There are also some cool effects like screen sampler or audio visualizer. Screen sampler will grab portions of your screen and match the RGB's on the headset to whatever your screen is displaying. The next tab is the assignments tab, and here is where users will be able to assign those programmable keys on the left earcup with whatever you would like. Even though I personally found these buttons to be absolutely useless, Logitech has gone above and beyond to make programming them as easy as possible. There are a plethora of programmable options, and cycling through them all is extremely easy, as is adding to them to the buttons themselves. The next tab is the acoustics tab, and here is where users will be able to enable/disable noise removal, enable surround sound, increase/decrease sidetone, microphone levels, and overall volume level. All of this is very self-explanatory. Lastly, we have the equalizer. Logitech has also decided to go with moods instead of modes, which is a humorous and fitting touch. The moods provided: FPS, flat, communications, bass boost, MOBA, and cinematic. Users also have the ability to add their own moods.

All in all, the G Hub software is one of the easiest and best pieces of peripheral software's out there; I couldn't recommend it more. 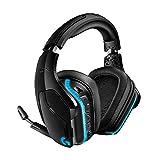