Far Cry New Dawn runs beautifully at 111FPS average, 1FPS faster than the RTX 2070 SUPER Founders Edition -- but much quieter, and cooler -- oh and it looks sweet, too. 139FPS average in Shadow of the Tomb Raider rounds out our 1080p benchmarks, just 1FPS away from the slightly higher-end RTX 2080. 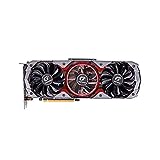