Fnatic has equipped the REACT with 53 drivers and has boasted on their website that they are specifically fine-tuned for eSports gaming. I put this claim to the test, and I can say after playing upwards of thirty hours of games with the REACT that this claim is completely true. I would even go as far as to say that the REACT is one of, if not the best headset I have played FPS games with. Let me explain why.

It honestly took me about five hours or so to realize just how good the REACT was at competitive shooters. Why did it take me so long? Because I was too busy feeling like I was hacking in Apex Legends and Call of Duty Modern Warfare. Why did I feel like I was hacking? Because when wearing the REACT, I felt like no one could ever sneak up on me, and I knew where everyone was at the same time. It felt like I was always the one at a positional advantage. I could hear footsteps and reloads before all of my other teammates could, meaning I was the one making all of the calls before they were.

Why was this happening? Because FNATIC has finely-tuned the mid and highs in the REACT while tightening the base. Meaning that every sound is that is heard in the mid to high range is crystal clear through the REACT, and is hard to miss by the player. This also means that the REACT is specifically designed for listening to key competitive sounds such as reloads, footsteps, and gunfire. As for the base, it doesn't have very much oomph to it, but that is easily counteracted by how good the mid to high range is. I found these advantages especially noticeable in FPS games.

For a headset that only comes in at the cost of $80, I am absolutely blown away with the gaming audio quality. I have never felt more calm and collected in a competitive shooter than when I was wearing the REACT. I heard every step, every movement, and every mistake my enemy made. The directional audio is unparalleled, and I'm yet to find a headset that can match its quality and price.

With such heavy emphasis on competitive gaming, it was expected that the REACT would fall off when it came to music listening, and it did. Hip-hop, movie soundtracks, and basically anything with bass didn't have a nice deep kick to it. This wasn't the end of the world, though the bass quality is passable. The REACT isn't designed for music listening, but if you happen to listen to music with it, you won't be that upset about it.

The REACT's microphone is awesome to use. I absolutely love that Fnatic decided to go with a metal arm as it's extremely sturdy and feels good to move around. Users are able to put this microphone at almost any angle they want, which means it will be able to comply with virtually any gamers positioning needs.

As for the quality of the microphone, I'm happy to report that the REACT sports an above-average microphone. Communication doesn't get lost, and in-game calls have never been easier. I listened to the microphone through Windows and found that all of my words sounded clear and that the microphone didn't cut out when I was talking for long periods. I also did a keyboard test of my MX Cherry Red Switches, and even when typing at full speed, the microphone didn't pick up any keystrokes.

I also asked my friends on Discord what they thought of the microphone and if I was clear and to them. They said that the microphone sounded a bit better than an average headset microphone but not as good as my desktop microphone (Razer Seiren X). That response was expected and proves that the REACT's microphone is up to scratch for competitive gaming communication. Overall, the microphone is very impressive for an $80 headset. 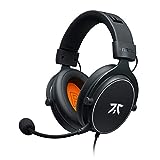