There is so much to like with the new TEAM XTREEM ARGB DDR$ that we are having a tough time trying to sort out what to talk about first, or what we like the most. Starting with the latter, the uniqueness and sleekness of these sticks is something that cannot be ignored. Most of the DDR4 sold is based on looks without concession to other factors, and based on looks alone, not only are these super appealing, likely, all of your friends will not have them, making your build just as unique! The blend of deep blue against the polished metal, and once the ARGB kicks in under power and control of just about anything motherboards come with for RGB support; it is pretty much plug-and-play.

The name is not just something slapped on the side of the heat spreaders, either. Our results showed how strong the XTREEM ARGB is right out of the box, and with a kit of 3600MHz DDR4 tuned to 14-15-15-35 using 1.45V, we knew we were not looking at your average kit of memory. Rather something where the company took the time to screen ICs and program a finely tuned XMP profile to them, allowing users to get what they want with minimal effort!

Even though both sides of the sticks are not identical looking and maybe strange to look at on something like an X299 motherboard, for the mainstream users, we see little issue. We also appreciate the fact that we get all of that sexiness in a kit of RAM that is just 48.7mm tall. That, combined with all of the other factors we have shown across all of the charts and what we spoke of in the last paragraph, it is hard not to hold the XTREEM ARGB in high regard! There is a slight issue to all of this, though, as it seems we have a rainbow farting unicorn version of DDR4, where neither of them seems to exist at this time.

That is to say, they exist, as we have them in this review, but out in the wild, for the average user to obtain; good luck! Looking at the lineup and option available in the XTREEM ARGB lineup, we would gladly opt for the 3200MHz kit with 14-14-14-34 timings or the 4000MHz kit with 18-20-20-44 timings. We have a feeling, though, that the other options may not do as well as what we saw in this review, but that is just an educated guess on our part.

Depending on which in the lineup you are looking to buy, the pricing ranges from $150 to $180, but no mention of pricing on what we just tested. We know at the beginning, we guessed you would have to pay on the high-end of the scale, but with the looks, performance, and rarity, we would gladly pay in the range of $200 to get some of the best 3600MHz DDR4, not by spec, but just straight up killing it in the charts.

If the TEAM T-Force XTREEM ARGB wasn't kicking ass and taking names, it was in the top five in a few, and if not there, still above average in testing. It is almost like TEAM looked at our charts and went to the table with the idea to deliver something better than the rest while providing a look that nobody else has ever tried, and is likely kicking themselves for the lack of imagination. To us, this TEAM memory delivered in all aspects; we just wish it was more readily available! 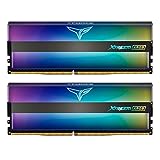 With just one score below par, the TEAM XTREEM ARGB we have, are beasts! They look amazing, the stay at the top of our charts, and the only thing wrong with the situation is availability and an unknown price point. Still, we would gladly hold out a fist full of cash for it!