So how good is the Elgato Key Light Air? Well, for its price of $129.99, buyers will be getting an easy to set up light that has much more control and features than a cheap light. If you are a streamer and are considering getting into the streaming game for the long haul, I would definitely recommend the Key Light Air as a long term investment.

It might be a bit pricey at first glance, but for the features it gives you, it's more than worth it. My reasoning behind this can be boiled down to one word, versatility. Since the Key Light Air's settings can be tweaked via your PC or phone, it will be great for every gamer's set up. This gives the Key Light Air an advantage over traditional lighting setups, which might have restrictive lighting control. Having all of the Key Light Air's features within a physical arms reach makes using it satisfyingly smooth. Owning a Stream Deck also means that users won't have to use the Elgato Control Center, as all of the options that would originally have to be tweaked on the PC/mobile app will be on the Stream Deck instead. 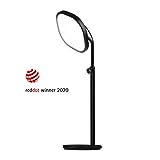