Let's get into what keeps users using Astro's, the performance of the headset. I played upwards of 30 hours of Apex Legends with the A40's plugged into the MixAmp Pro, and what I heard was clear clean-cut audio. Highs, mids, and lows were easily distinguishable. The base sounded fantastic as well as high pitch audio.

As for the A40's without the MixAmp Pro, the audio that I heard didn't sound distorted, but more muffled and cramped. Individual sounds weren't as distinguishable, which made me feel like the overall audio sounded like it was being projected into my ears as one track, and not as separate sounds.

So, with that being said, the A40's are noticeably better when they are plugged into the MixAmp Pro. The MixAmp Pro seems to open up the sound gauge much and allows for a wider range of sounds to be projected through the headset. This, in turn, enables a much better gaming experience overall.

Using the A40's plugged into the MixAmp Pro also allows for gamers to bounce between EQ presets. Astro provides users with four different EQ presets. These are called; Astro+, Balanced, Natural Bass, and Tournament. Each of these presets gives a different kind of feel to the headset's sound, and depending on what you are listening to through the headset will determine which mode you should be on. For this review, I kept my A40's on the 'Natural Bass' preset, which keeps it at stock settings. For general use, I'd recommend users just to keep it on this setting.

Here are some screenshots of what the Astro Command Center looks like: The A40 microphone is arguably one of the best gaming headset microphones on the market, not only for its design (which is amazing) but also for its sound quality. The design of the microphone might be on the longer side of things, but through its length, it unlocks a certain level of customizable ability. The microphone is extremely flexible and can be easily bent into any kind of direction that the user desires. It's also sturdy, looks aesthetically pleasing, and comes with an in-built noise gate that can be increased/decreased through the Astro Command Center.

As for microphone audio quality, the A40's microphone is great. I played several games of Overwatch and Apex Legends and asked my team what they thought of the mic. They responded that the microphone sounded clear and that I was not muffled or distant from the mic at all. I sounded clean, with each of my words being heard loud and clear. I also used this microphone on Discord and asked a few of my friends how it compared to my Razer Seiren Emote desk microphone through a blind test.

I took the A40's to the gym with me, and while you traditionally wouldn't use a gaming headset outside of gaming scenario, I wanted to test how they would hold up for someone who was looking to use the A40's for both gaming and music listening. To put it short, I wasn't that impressed. The A40's sounded pretty decent when listening to music off Spotify, but I noticed at higher volumes higher pitch audio seemed to get lost in the sound. I also didn't have the pleasure of being able to tweak my EQ to a specific setting due to the headset being plugged directly into my phone.

So as a whole, I wouldn't recommend using the A40's for music listening, they are decent if that's the only headset you have, but I wouldn't buy them for that purpose specifically.

At the time of testing the Astro A40's + MixAmp Pro, my motherboard didn't have an optical port. So instead of testing the Dolby Atmos without the optical cable, which provides considerable performance increases, I decided to leave this part out of the review. I thought it wouldn't be fair to both readers and Astro to hear my thoughts on this feature when the headset isn't at its full capabilities. 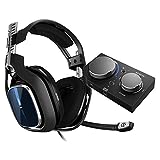