Today, we see the highest core count and most expensive processor we have ever tested. While we have looked at some pricey Xeon CPUs such as some in the Gold series and the W-3175X, none of them match the AMD Threadripper 3990X in core count or price. However, for the price, you get some amazing performance when utilizing and application that can use all those cores.

The unprecedented 64-core AMD Zen 2-based CPUs have until now been unavailable outside of their EPYC lineup, but today they are now accessible to consumers with a broad ecosystem of supported hardware. Featuring eight 8-core CPU core clusters, each directly connected to a central hub through a high-speed Infinity Fabric link, the CPU looks to smash everything out of the water. 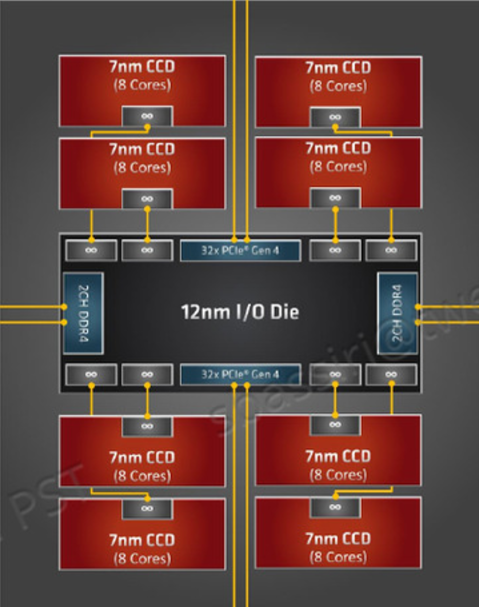 Let's see what it has in stock for us. 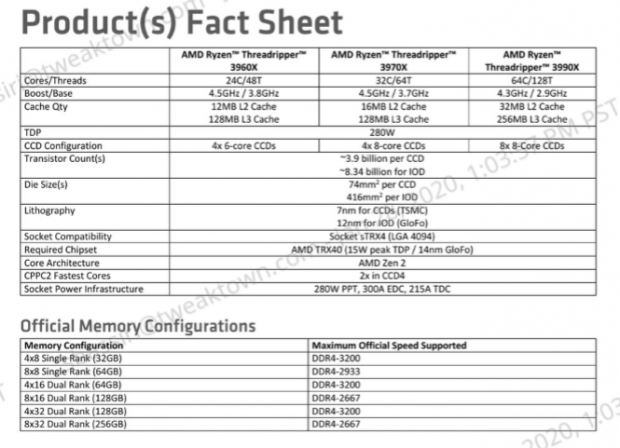 The 3990X has boost speeds up to 4.3GHz with an all-core up to 2.9GHz. We see double the cache compared to the 32-core variant, with up to 256MB of L3 cache! The TDP of the CPU is 280W, the same as the other CPUs, and later on, we will talk about how they accomplish this in the power testing section.

It has roughly 39.5 billion transistors in total, which is crazy to think about, with the Cores based on 7nm from TSMC and the IOD based on 12nm from GloFo. 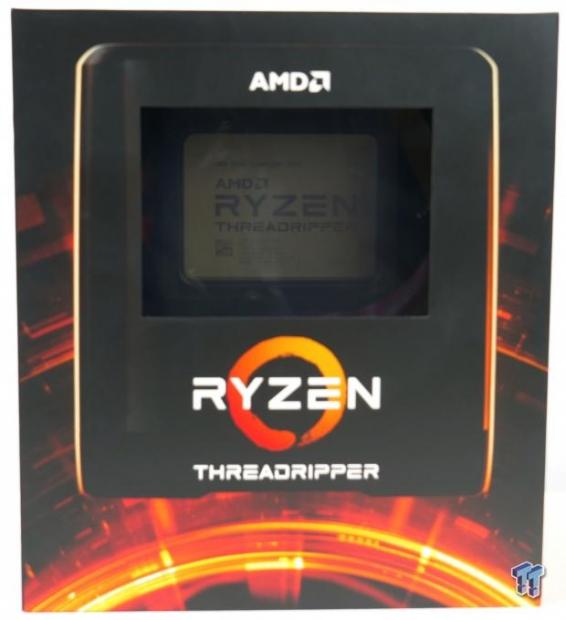 The new box is the same design as that for the 3960X and 3970X, pretty decent and compact, and you can put it on display afterward as it's designed that way with Threadripper written behind the CPU. 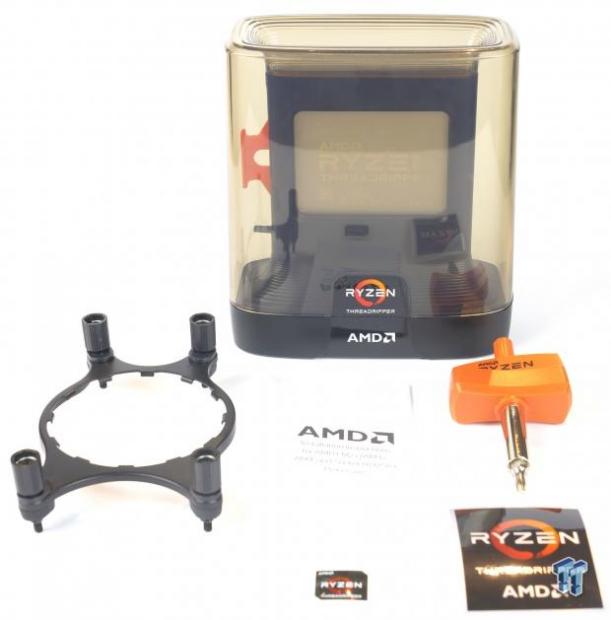 The CPU comes with an Aestek bracket, a manual, a Torx wrench, a large sticker, a small sticker, and a warranty pamphlet. The CPU is in a holder, which makes it very easy to install the CPU without having to actually touch it, minimizing the chances of ESD killing the CPU. 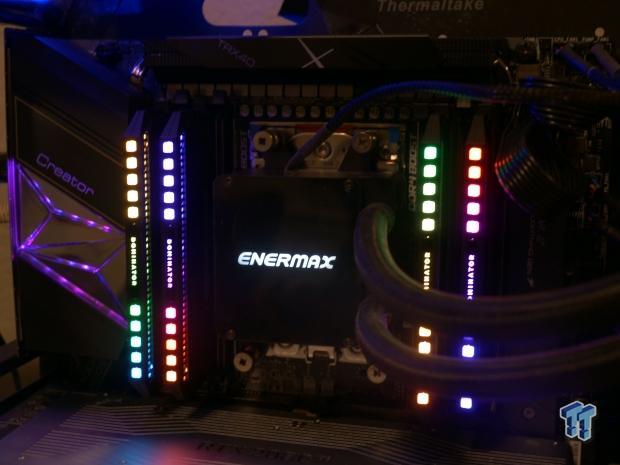 AMD recommended we use a specific motherboard for the review due to RAM support. 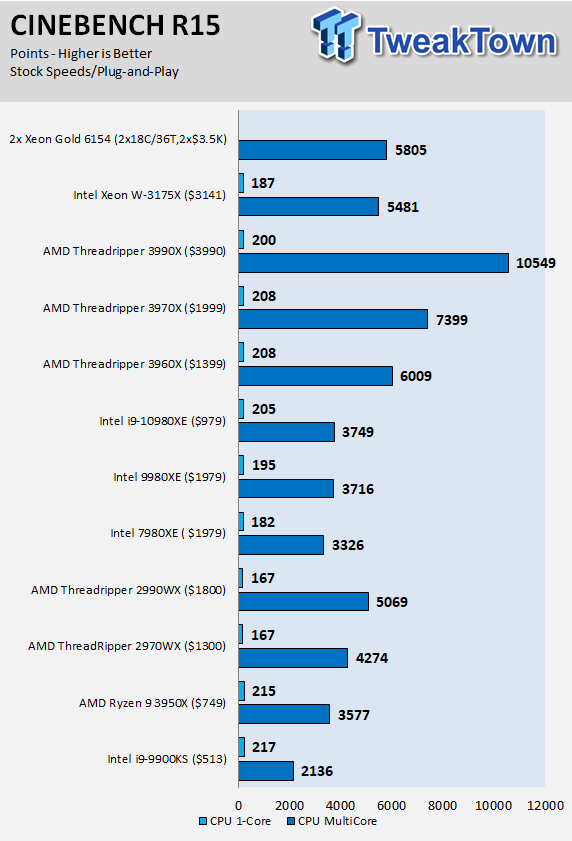 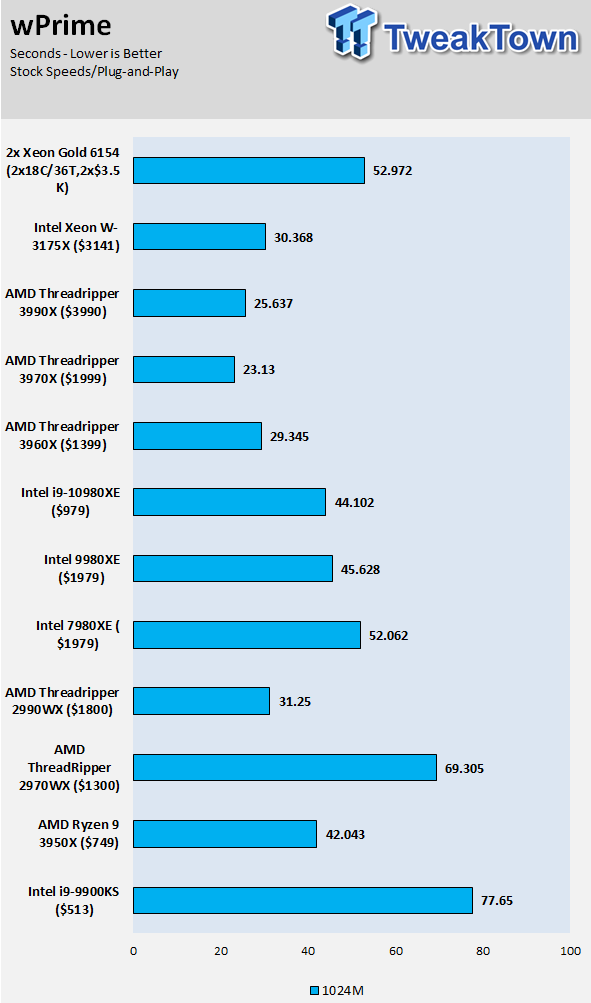 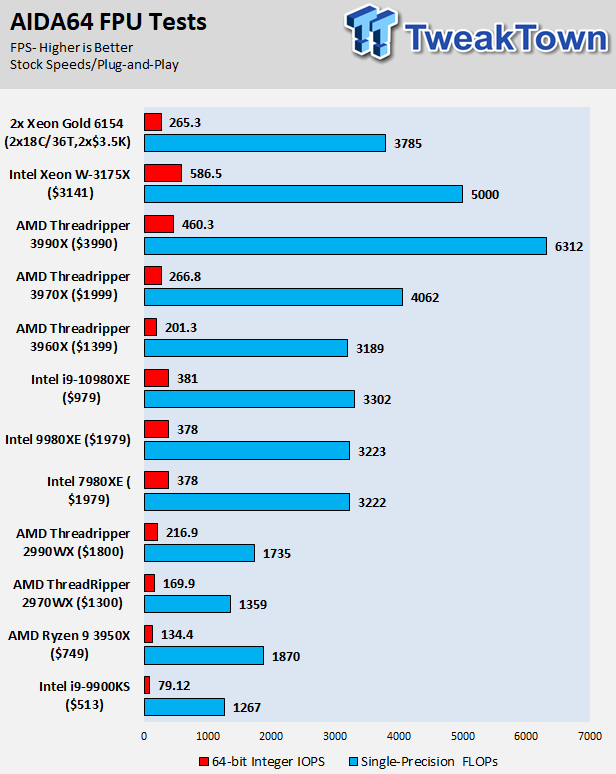 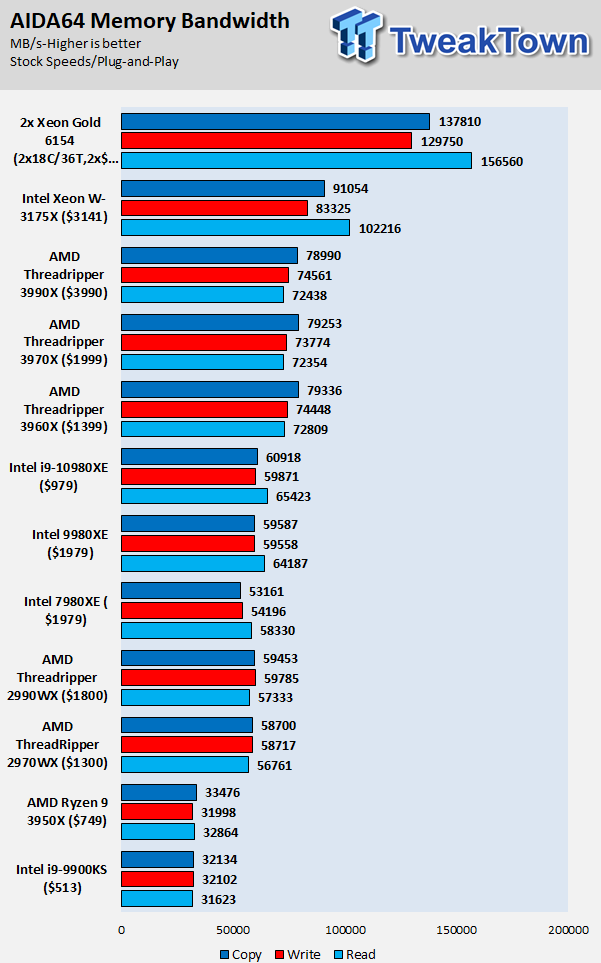 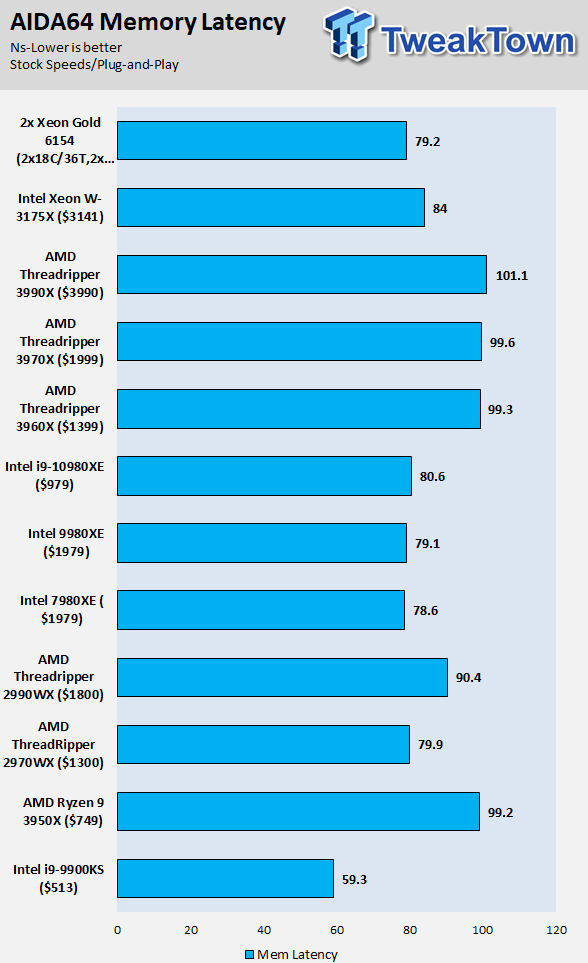 AMD's 3990X destroys absolutely everything by a HUGE margin. The results are even more impressive in CINEBENCH R20, and if you go to the overclocking page, you can see those results both stock and overclocked. It's crazy impressive. The craziest part is that this CPU doesn't use much more power than the 3970X, at least not at stock.

One thing AMD mentioned to us is that previous Windows 10 versions before build 1903 (with a special service pack) will not easily take advantage of all cores and threads due to limitations on upper thread/core count. However, while that is solved by simply using the latest software and OS versions, in some applications, that isn't possible.

In wPrime, we see roughly the same results as the 3970X, and that is because that is one application that is pretty old and tops out at 64 threads, so half the CPU isn't being used. We see the best FLOPS results of any CPU in our charts, taking that away from Intel, and the CPU closes the gap on IOPS. Memory bandwidth and latency are similar to that of AMD's other TRX40 CPUs. 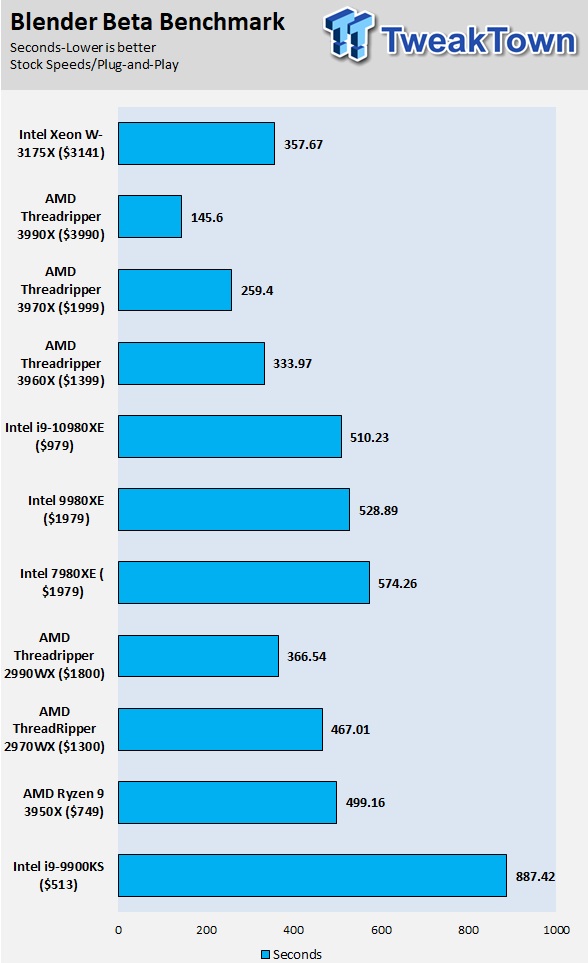 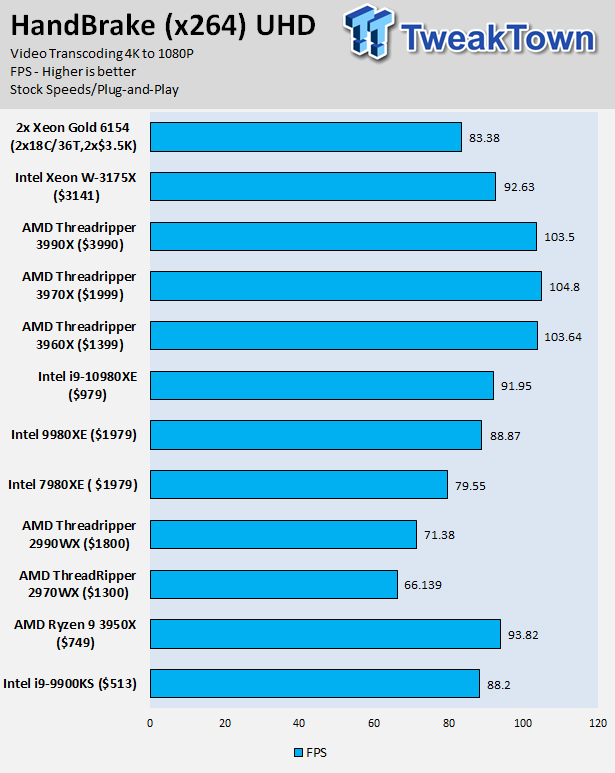 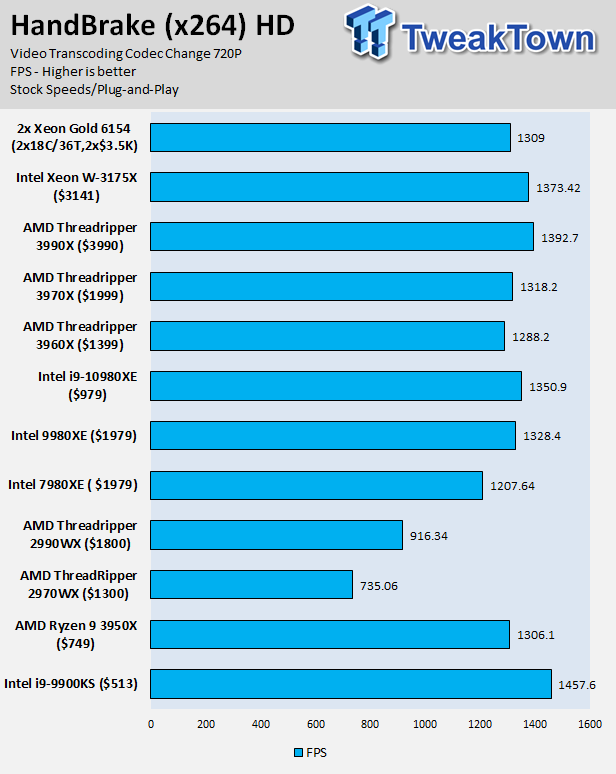 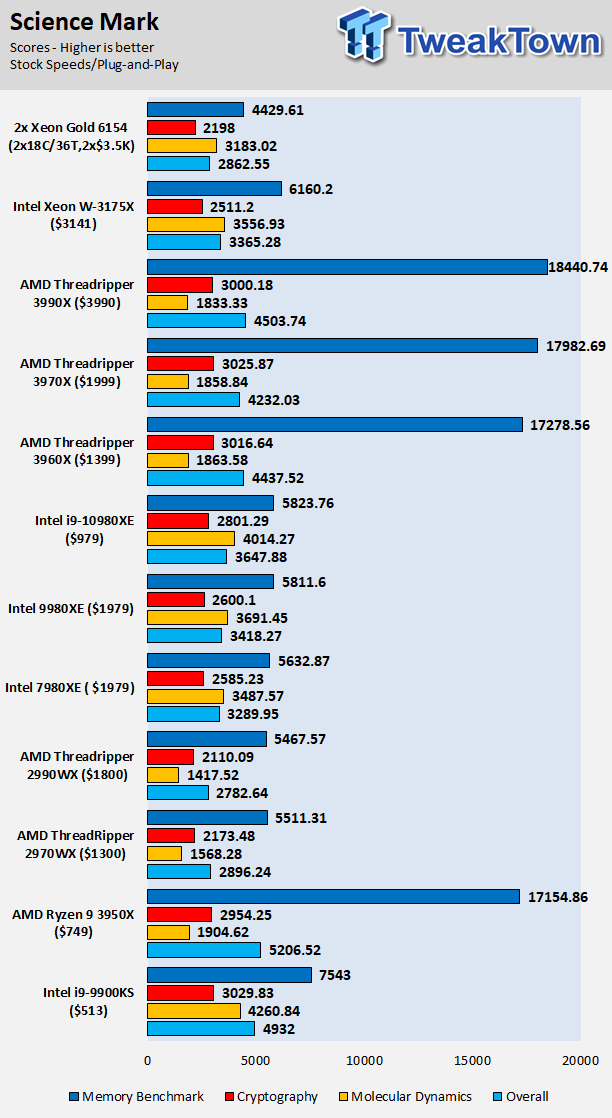 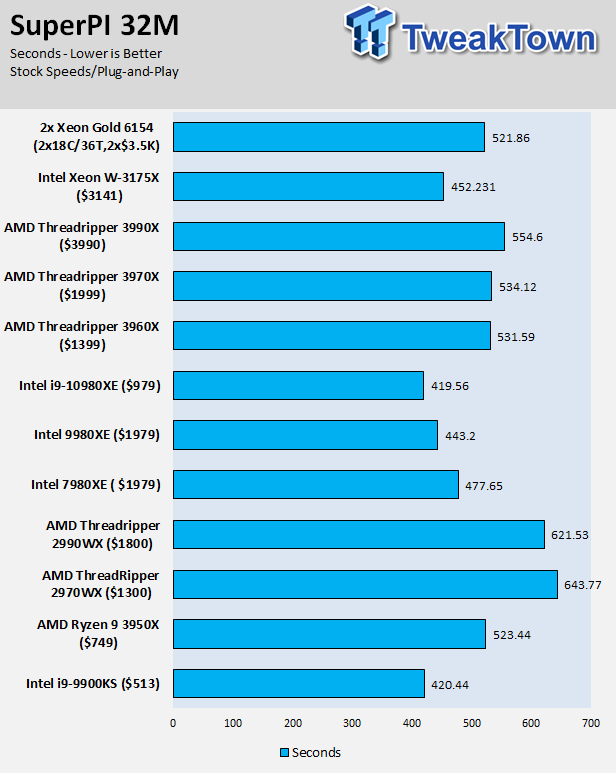 The CPU absolutely demolishes everything in Blender. We see more than a 100% decrease in render time, which was very unexpected. The prized ability of this CPU is its ability to cut down rendering and production time by upwards of 100%, and that is something worth twice the price (3970X @ ½ 3990X cost).

In Handbrake, we see excellent results as well. ScienceMark is also one of those legacy benchmarks that cannot take advantage of many cores, and it tops out at 32 threads. The performance is still better.

SuperPI is single-threaded, and here we see slightly lower performance than the other Threadripper CPUs, but that is because of a lower boost speed (200MHz lower). 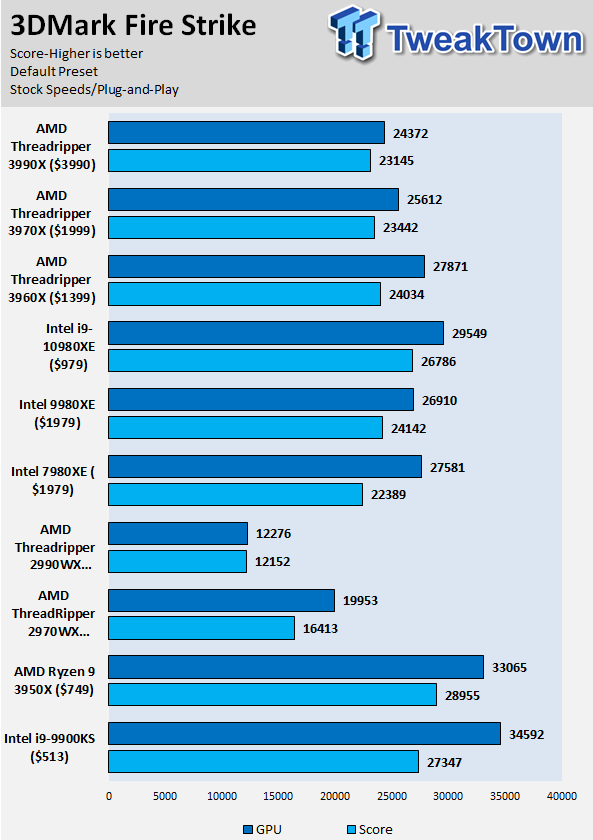 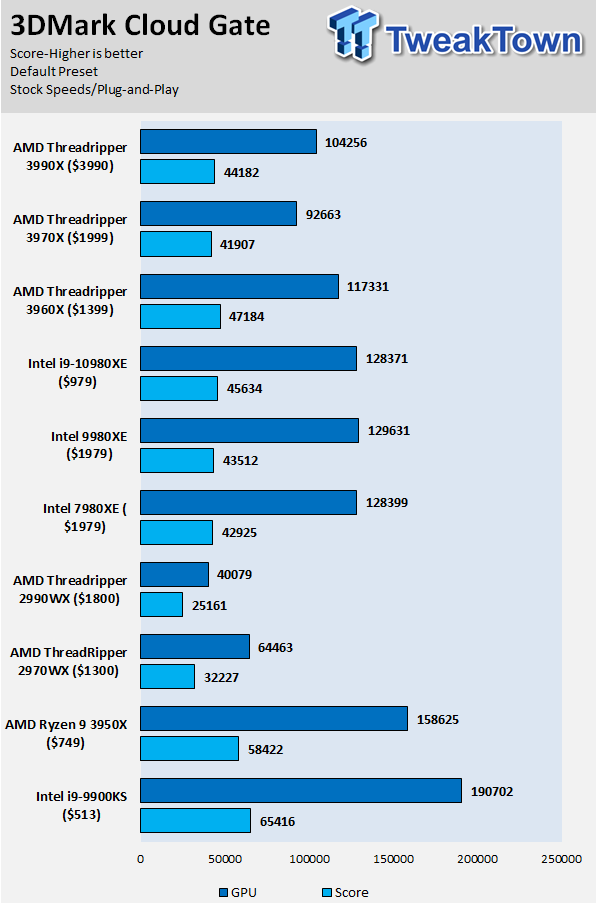 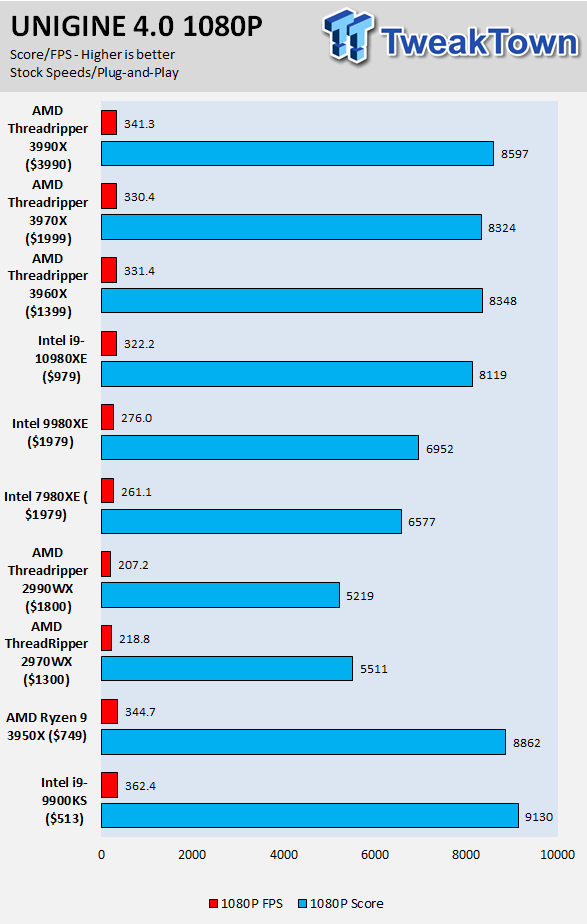 We should state at this point that this CPU is NOT a gaming CPU by any means. We just figured it would be fun to see how it does in the charts. Performance is quite decent in both 3DMark benchmarks.

In UNIGINE, we also see similar performance to that of the other TRX40 CPUs, but it does slightly better than the other CPUs. 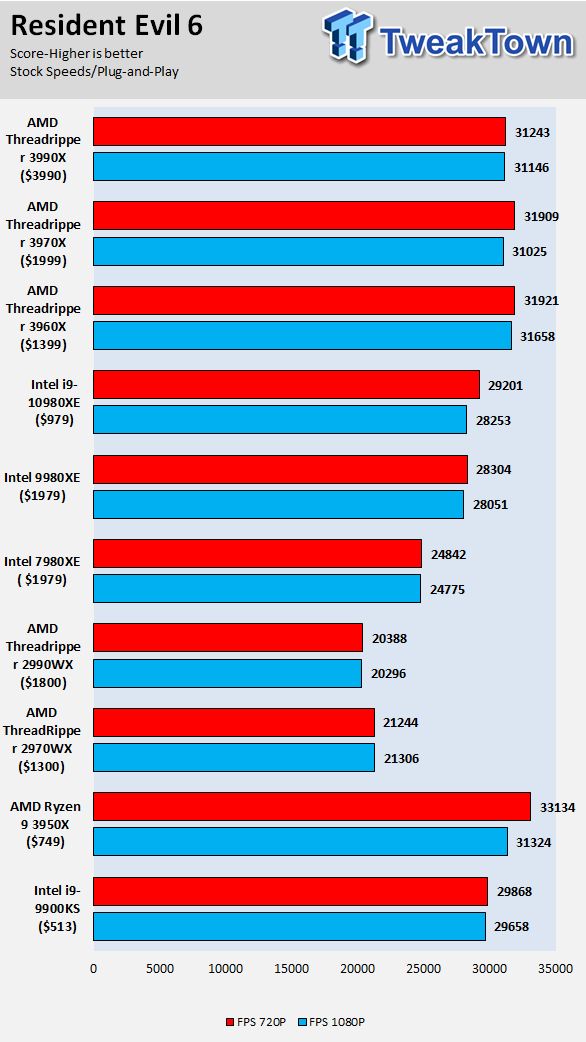 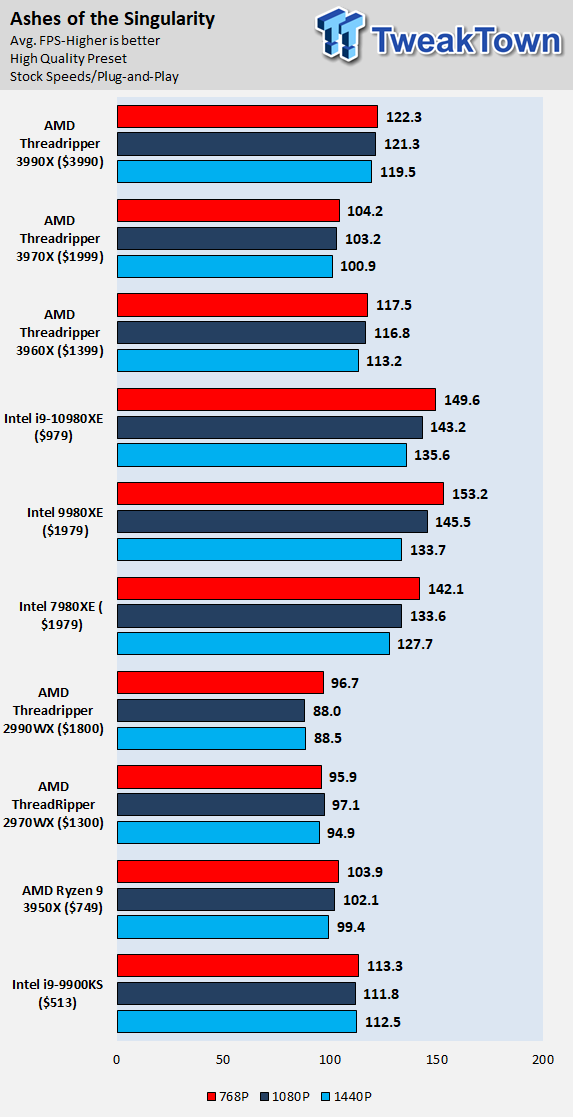 However, in Ashes of the Singularity: Escalation, we see some of the best performance compared to any of the other Threadripper CPUs.

The Ryzen Threadripper 3990X eats up power, but not nearly as much as we expected, at least at stock. We saw total system power go to around 370W, with the CPU pulling about 300W. We noticed that AMD achieved this by greatly reducing the core voltage, so we were pulling a bit over 300A at less than 1v. HOWEVER, look below to see what happens when we enable PBOC; hint, the system power went over 1000W. 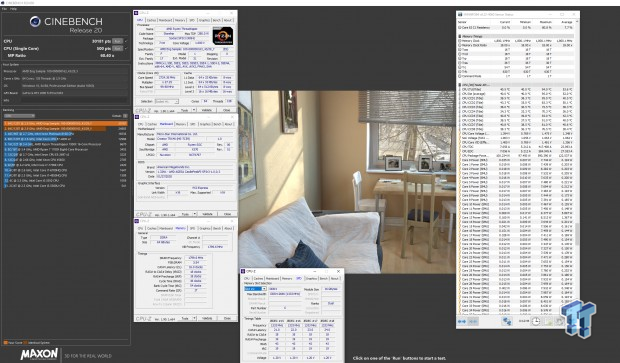 As of now, we are not going to be overclocking the 3990X, enabling Performance Boost Overdrive fed the CPU up to 800W easily, if not higher. Core voltages went as high as 1.45v from less than 1v at stock, and total system power consumption increased almost more than three times.

However, if you look at the performance increase in CINEBENCH between the CPU at stock and with PBOD enabled (with XMP of course), we see some crazy results. Whether or not this increase in power is worth the extra performance, you will need a 1kw PSU to take full advantage of this CPU.

You will also need a solid TRX40 motherboard to enable XMP up to 3600MHz with four 16GB dual-rank kits. AMD told us only one motherboard did it by just enabling XMP out of the box; others need manual tweaking. Officially AMD only supports up to 3200MHz with 4x16 GB dual-rank DIMMs, so this is over their limits.

Here is where you can fast forward to the final section of the review and get a quick recap and points on the AMD Ryzen Threadripper 3990X. 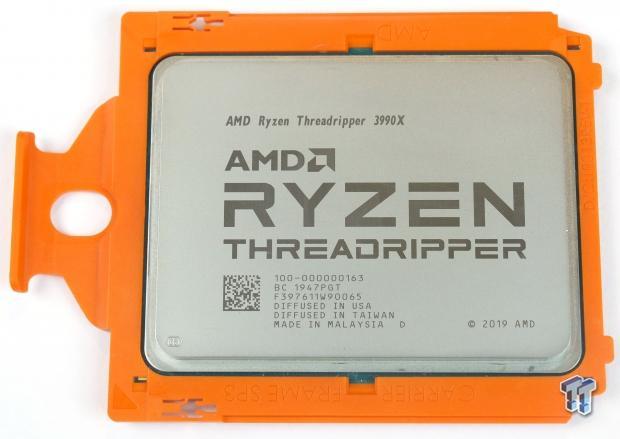 Highest Core Counts: Three years ago no one would have imagined a 64-core CPU that consumers could easily purchase and toss into a system for consumers and professionals alike. While EPYC features 64-cores as well, AMD says these are not simple bins of EPYC counterparts, that they are tuned differently.

That tells us that AMD picked some of the highest binned CCDs and then put eight of them on a package for this CPU, and picked them for high performance rather than power efficiency as in the data center power is more important than at a workstation.

Crazy Professional Performance: With 64-cores, you would expect the 3990X do anywhere from 15-30% better than its 32-core counterpart, as cores don't always scale. However, we see even more than that in CINEBENCH R20, and in Blender, we see over 100% performance increases. That is ridiculous and makes the CPU shine for those who need it for professional work.

Platform: TRX40 is AMD's most advanced chipset, and the platform itself is one of the most if not the most loaded on the market. You will be able to connect to the latest storage devices easily and network controllers, all the while not stealing lanes meant for GPUs.

Price: The most expensive consumer/workstation CPU is the 3990X, and the motherboards that will adequately support it cost upwards of $800, making this platform one of the most pricey.

The Ryzen 3990X at stock would hit 55C maximum with a 300W power draw, which is cooler than other AMD TRX40 CPUs using the same cooler (3970X around 70C). However, when we enabled PBOD and XMP, we get over 800W of power draw (with some lights flickering in the apartment with total system power draw over 1kW), and the CPU will hit upwards of 95C. That was just running CINEBENCH. The CPU actually runs cool at stock, which was impressive.

AMD achieves this through dropping voltage per core below 1v at stock and relies on high current to get excellent performance. While games aren't what this CPU is made for, we didn't see any downside compared to the 3970X or 3960X when we ran benchmarks.

However, where this CPU shines and what it's meant for is content creation and rendering. It would also be a solid CPU for virtualization, and AMD recommends at least 4GB per core (256GB total) for those purposes, but we were told using 64GB for most use cases is good enough.

Basically, it's a supercharged product, with best in class performance. If we were to make a metaphor, we would say it's some crazy monster truck or a Bugatti; it's made to outrun helicopters or fly 50 feet in the air (metaphor for content production and rendering), and while it can still drive on a street (metaphor for gaming), it's not meant to, but it can.

The Ryzen Threadripper 3990X is a best in class CPU from AMD, and is the most powerful CPU we have ever seen for content production and rendering. It's a perfect high performance workstation CPU, and it can easily overclock if you have the proper infrastructure to support it.