While AMD is promising to support USB 4.0 at years end with its 600 series chipset, current mainstream platforms are limited to USB 3.2 Gen 1 and Gen 2. For enthusiasts that were one of the lucky few that upgraded to AMD's TR4 or Intel's X399 platform, if you purchased the correct board, now have access to USB 3.2x2 and what better way to take advantage of this then with the world's first portable SSD to use the tech, the WD_BLACK P50.

While the P50 is certainly capable of reaching the limits of its 20Gb/s interface, WD has designed this solution to be backward compatible to Gen 1 USB 3.2. This means we have full legacy support for Type-C appliances like the PS4 and Xbox One, while PC users get the widest flexibility.

Marketing performance tops out at 2000 MB/s using the USB 3.2x2 interface. Gen2 users should see a full 1000 MB/s and legacy Gen 1 connections around 530-550 MB/s. The P50 is offered in three capacity options reaching from 500GB to 1 and 2TB. All capacities are offered with a five-year warranty. Packaging offers an image of the drive, marketing below, including performance and capacity. The back goes into more detail with box contents and compatibility. Included with the P50, we have a USB-C cable along with a Type-A cable. The drives aesthetic follows what we have seen from past WD_BLACK solutions with a hardened case look, with almost a military feel to it. The end holds the USB-C connector and LED to the left. Looking at ATTO, we find the P50 performs amazingly well 512K through 64M with peak drive performance at 980 MB/s read and 897 MB/s write. Moving to our price vs. performance charts, as tested, the WD P50 comes in around the middle of the pack at 81%. That said, if adjusted for the theoretical performance of its 3.2x2 interface of 1970 MB/s read and 1910 MB/s write, the P50 would have top honors easily.

Just like our past experiences with the D10 and P10 from the new WD_BLACK lineup, the P50 comes away a fantastic flexible solution that harbors terrific potential with its 3.2x2 interface while maintaining all that is good about USB, to begin with. Backward compatibility extends all the way back to legacy Type-C devices with the included cable. This means a wide support channel that includes current generation gaming consoles.

The performance was on par with my expectations at 985 MB/s read and 905 MB/s write. Random read and write weren't too shabby, reaching 26.8 MB/s and 78 Mb/s, respectively. Using ATTO, I found the P50 to be a capable backup solution, too, with solid sequential performance from 512K forward.

Pricing of the P50 is a bit steep but was expected, given the new technology included. At $249.99 for the 1TB capacity, it's among the most expensive portable drives available. That said, WD does offer this with a five-year warranty, which happens to be class-leading for portable solutions, and with the right hardware, you will see amazing performance. 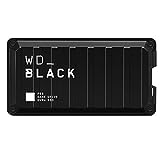 Whether you have a top of the line machine that can take advantage of USB3.2x2 or not, the P50 offers a flexible interface compatible with all of your favorite gaming appliances.