The Lockerstor 8 supports both 2.5Gbe and 10Gbe. All testing was completed under a 2.5Gbe network environment. Starting with RAID 0 testing, we show solid performance numbers at 296 MB/s for playback and 239 MB/s for record. File copy to and from reach 250MB/s and 290 MB/s, respectively. RAID 5 was able to show the increased power of the Lockerstor platform over the Nimbustor. Video Playback reached 295 MB/s while file copy operations were easily doubled and tripled in some cases. In our sequential read testing, the performance was not affected at all between RAID setups, all three bringing in 295 MB/s. Workload testing really shows a large performance difference between the two ASUSTOR platforms. The Lockerstor with SSDs is an absolute beast hitting near 20K IOPS in database and 16K IOPS in workstation. RAID 5 almost flips performance, with Workstation having the highest at 14K IOPS while the other four hover near 12K IOPS. 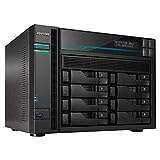