When I first was asked to take a look at the Vybe, I was interested simply based on the fact that the chassis had a familiarity to me, along with the fact that this was an excellent chance to build an awesome liquid-cooled machine as well. As I dug into the chassis, I realized that there were many things to like about the Vybe, which we will list below, but overall it was a case that came across as very easy to build in for the most part.

Moving to the custom liquid cooling and the first thing we noticed was how much quieter the Vybe became. The Measured ambient was 24.0C with an RH of 44%, and the CPU showed a delta of 57.4C while the GPU showed a delta of just 19C. The ability to liquid cool the GPU net us a drop in GPU temp of almost 40C, which meant rock stable boost clocks only limited by the arbitrary power limit. The thing worth noting is that the 9900K CPU on the H100i would throttle under prolonged stress, but under custom liquid cooling, it held its ground at top clocks and did not budge even under heavy sustained loading. Now it's time to talk about what we like about the Vybe. There's a lot to like about the Vybe, as it's either based on a very competent case or from the same OEM. The EATX fitment and substantial cooling fitment capabilities are all significant positive marks. The integrated fan and ARGB hub along with preinstalled ARGB strip and front logo are welcome; they allow you to tune your system aesthetics to match whatever theme you are looking for.

Next, we will look at what we like about the Apex ICS. First up, like any liquid cooling manifold or distro plate, it allows for more natural planning of liquid cooling tube routing and even less overall tube mess. It also adds to the aesthetic of the final build as I don't think many would sneer at the appearance of a unit like this. The inclusion of the secure and spill-proof drain port is very cool. Using a PWM DDC pump is also great, and the addition of an addressable strip into the unit adds to the ability to tune the aesthetic.

Now we have to address some things I feel could be better with the Vybe. First up is the width of the chassis, which, if it were enhanced by up to 20mm, would offer much more fitment capabilities for top-mounted radiators while opening up DIMM support. The fact that a single Type-A port uses a full 20-pin header is something I have knocked points off for in the past, and even with the solid I/O of the Vybe, it's going to lose some points here as well. The ARGB aesthetic is terrific, but I do wish you could adjust the power switch RGB as it will not match many themes, and since it faces the same side as the main components, you will notice it.

Now to the Apex ICS again, and what we find an issue with. There's not a ton I can say here as the unit is quite well built. One thing is the position of the return (inlet or from radiator) port. Some creative reshuffling of the Apex ICS could open up 360mm compatibility for the Vybe, but as it stands, you block the inlet port.

The price point for the chassis at $119.99 is not bad for what it offers. When comparing it to the comparable offerings, it holds its own in both performance and subtle yet strong aesthetic appeal. When purchasing the Apex ICS specifically built for the Vybe, it becomes an even better deal. When you look around, we find that most liquid cooling manifolds or distro plates can run over $200, where the Apex ICS comes in at $149 or 269.99 for the case with the Apex ICS preinstalled.

MAINGEAR chose an excellent starting point for the Vybe platform and added features to make it both a more comfortable build and a robust aesthetic contender. 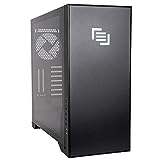 MAINGEAR may not be a chassis manufacturer, but they took a design and added some cool aesthetic options along with features to ease builds, which warrant recognition.