We can hit advertised sequential speeds with the usual caveat regarding E16 sequential write speeds. There are actually two caveats since we've switched to CDM version 7. The first is CDM 7 doesn't use the same file size, or queues as version 6, which was used to establish factory sequential specs. Secondly, sequential write speeds of 4,400 MB/s are only attainable when the drive is empty or almost empty, and we test as OS disk 50% filled.

We want to take note of the HOF Pro's Q1T1 random read speed of 66.12 MB/s as it is slightly better than any Phison E16-based SSD that we've tested to this point. When assessing Anvil results, our attention is focused on the total read score first. The reason being, read performance matters most in relation to user experience. Typically speaking, 80% of the data digested by consumers is read back while only 20% is written anew. While virtually meaningless to the end-user, we are hitting nearly 900K random write IOPS at QD64 and a solid 668K random read IOPS at QD128. 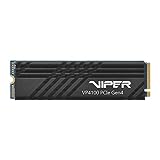