The front of the box, which luckily I was able to salvage as the shipping company had applied labels and whatnot all over the place. It shows a line drawing of the 678C with large Corsair sails flanking it. The Corsair logo sits up top with the name and designation below.

The first of the two smaller sides have more depiction of the chassis and its measurements along with a more open view of the interior. There is also a rough spec listing in three languages adorning this edge. Now we get to the rear of the 678C box, and in standard Corsair fashion, we have an exploded view of the chassis. This view shows pretty much any removable part outside of the chassis. The reason I say pretty much is that it does not show the removable 5.25" brackets, but I think that's more because most users likely won't venture into removing those. Plus, it would get quite messy as well. Each item has a letter and a corresponding listing of what the item is in six languages, including English. Here we have the small opposing side, and again we see a very similar layout. This time the spec table is in three more languages, much like the previous side we had just viewed, which also broke down each part into six languages. This side also has a larger white label, which quickly shows what color the chassis is along with fan type and quantity. To the left, we have a white sticker with several bar codes for inventory control. Pulling the 678C from the box, we find that it is guarded by hard Styrofoam end caps, along with a sizeable hard Styrofoam panel to help protect the tempered glass panel. Now that we removed the side panel Styrofoam, we can see the chassis, which is also in a plastic bag to help avoid abrasions from vibration during transit. As yet another layer of protection corsair also adorns the exterior glass panel with a plastic protective film which can be removed after unboxing. 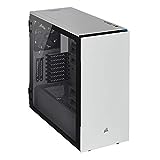