To date, we've tested several different brands of Phison E16-powered SSDs, and all have been impressive. Phison E16 Gen4 x4 powered SSDs have proven to be that fastest flash-based storage you can currently equip your AMD Zen II platform with. Today, we have TeamGroup's version of Phison's E16-powered powerhouse in the lab for evaluation.

TeamGroup's T-Force Cardea Zero Z440 Gen4 x4 M.2 SSD is configured a bit differently than what we've seen to this point. The main difference is that instead of a large integrated heat sink that is common to E16 powered SSDs, TeamGroup is using an ultra-thin graphene and copper thermal label. This layered copper and graphene thermal label are surprisingly effective, providing up to 9c cooler temps, according to TeamGroup marketing.

We kind of like this approach for a couple of reasons. The first being that most X570 based motherboards have integrated heat sinks that will not accommodate an integrated heat sink on the SSD itself. This isn't much of an issue if the heat sink is removable. However, some are not so the motherboard's M.2 SSD IHS must be abandoned, which can detract from the overall aesthetics of your Zen II build.

We like that the ultra-thin thermal label is quite effective at keeping the Phison E16 controller temps in check, but as we already know from previous testing, a heat sink is not a requirement for throttle-free performance in most cases. We also like the fact that if you do not have an integrated SSD heat sink on your motherboard and the drive is visible, the black and copper themed Cardea Zero Z440 will compliment your build. The Cardea Zero ships in an attractive and minimalistic blister pack. The drive's exclusive copper and graphene thermal label is advertised along with sequential performance and 5-year warranty. 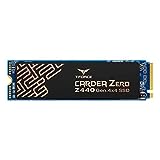