Today we find ourselves again looking at another Radeon X1900XTX based graphics card from the ATI camp. Earlier this week we had a look at an X1900XTX from Sapphire, the particular model was the TOXIC which carried with it a liquid cooling solution, which meant a super quiet operating VGA card.

While today we aren't looking at something as fancy as liquid cooling, we are looking at the brand new IceQ version from HIS, which we heard about months ago and have ever since been bugging our friends from HIS in Hong Kong to get our hands on one.

Like the X1800GTO we looked at a few weeks ago, the HIS X1900XTX is using the third revision generation of the IceQ cooling solution funnily enough known as IceQ 3. It has a few improvements over the previous one and is of course a lot more peaceful than the screamingly loud fans that we find on most other X1900XT(X) graphics cards.

Without delaying let's have a look at HIS and their funky new packaging and find out just how the air cooled solution compares against the liquid version we had from Sapphire only just the other day.

This is the second product from HIS that we have seen use the new black box, which in our opinion looks fantastic. When you see a lot of graphics cards from companies, you really get tired of seeing the same box over and over again so it is nice to see HIS mixing it up and using the new design for their IceQ 3 series of cards. 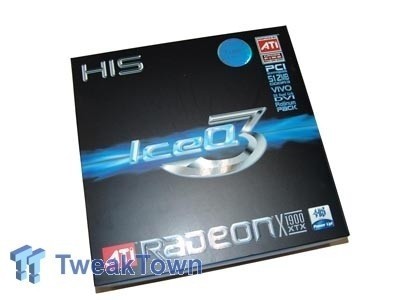 Looking at the front of the box it has all your standard information - PCI Express, 512MB of DDR3, VIVO, 2x Dual Link DVI Connectors and Platinum pack. We can also see the sticker in the top right corner stating that it is a "Turbo" model capable of a 700MHz core and 1700MHz memory speed. We can also see the Crossfire ready logo like all X1900XT(X) cards. 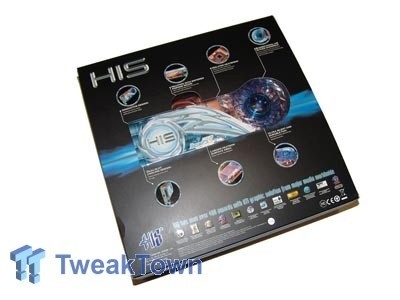 Turning the box around we see the cool looking X1900XTX with the new IceQ fan in all its glory installed. The new box is excellent in the way it points to features of the card and lets you know how their solution works with features like larger surface area and ultra silent fan. Across the bottom we see a small amount of words out of the hundreds they have won including one from your favorite tech website - TweakTown. 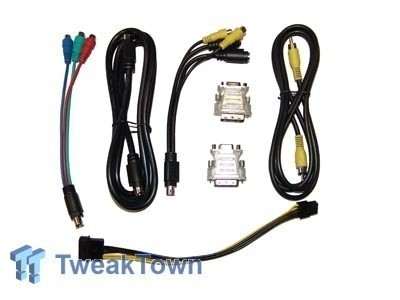 Opening up the box we dive past the card for just a moment to see what is inside. Being an X1900XTX the cable collection is pretty standard. We have got an extended RCA and S-Video cable for users of TV-Out, Component out for users with support for it along with the VIVO cable, which is of course, Video In / Video Out, a feature that is standard on all X1900XTX cards. We also have a power connector and two DVI connectors just in case you're not using a DVI monitor. 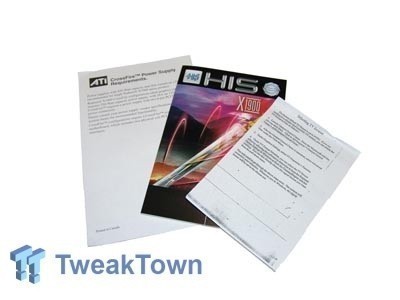 Before we move onto the more exciting CD collection we will have a quick look at the very boring but always very included paperwork. Included is a power supply requirement piece, a step by step to selecting your TV format if you're making use of the TV out feature and of course the very standard user guide. 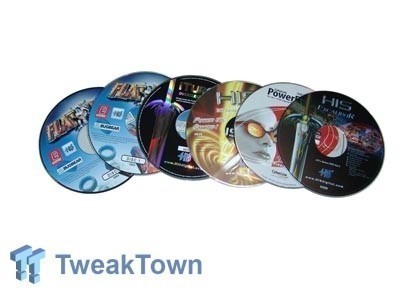 Onto the CD collection we have our bonus DVD which carries with it a number of cool programs and of course Dungeon Siege - we all most have enough copies in our lab for a 64 player LAN event. Power DVD, driver CD and iTurbo overclocking software are all included along with a copy of Flat Out. Hopefully in the not too distant future we see HIS move over to the new Flat Out 2 which has just been released and is an absolute blast to play. And, of course, we cannot forget about the little HIS Power Up! sticker that is included in the package.

When turning the box over we had a little sneak peak at the card and we can clearly see the new cooling solution. The good news is that the cooler doesn't take up any more room then the standard cooler yet is quieter and cools more efficiently. 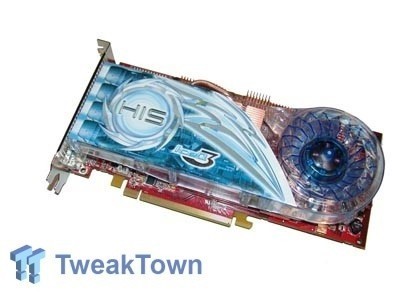 Moving to the top of the card we can see the new heat pipe they are using which wasn't present on the old IceQ version along the copper sinks covering the memory. 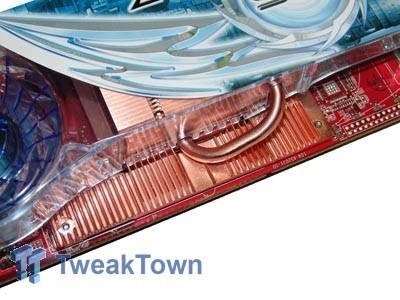 HIS has a complete feature run down of their new cooler on their website. For convenience sakes, we copied it and included it in the review. Please click on the image below for the full size version. 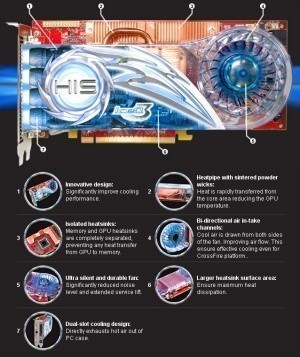 The back of the card shows the PCI Express power connector which is needed for all high-end ATI and nVidia graphics cards. 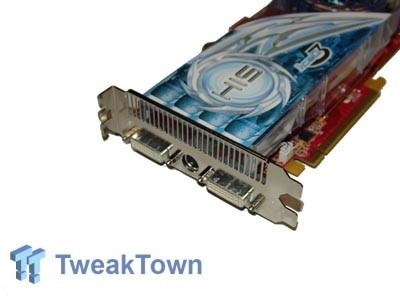 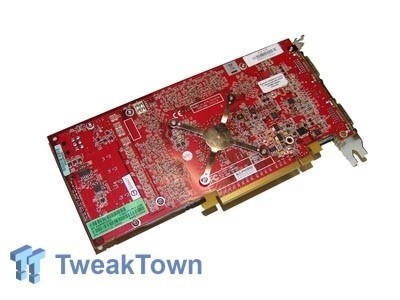 Finally when we turn the card over we can see the standard layout that is common on most X1900 cards along with the bracket that holds the heatsink on the front in place.

Like we saw on the front of the box we mentioned it was an iTurbo version. This means that the core is guaranteed to be capable of 700MHz and the memory is capable of 1700MHz.

We have tested the HIS graphics card as it runs out of the box, which is the default (650MHz/1550MHz DDR) ATI speeds. We then have it compared against the slightly overclocked Sapphire (675MHz/1600MHz DDR) solution we looked at earlier in the week and then we pulled out the overclocking tools and cranked the HIS card up to (717MHz/1740MHz DDR) and ran it through all our benchmarks.

3DMark06 being more intensive sees that when overclocked the card receives a decent performance boost.

We don't see much performance difference between the cards without HDR and at the low resolution with HDR on we still see the cards close together, it's not until the higher resolution we can see the difference with the overclocked HIS card really shining.

While the average FPS doesn't see a huge difference between the cards, both resolutions see the minimum FPS adjusted according to the overclock with the HIS when overclocked shining.

Doom 3 is another game which really sees an advantage with the overclocked cards at the high resolution.

Quake 4 shows little adjustments but you can see that the HIS card when at stock is slower then the slightly overclocked Sapphire TOXIC with the HIS when overclocked coming out ahead. 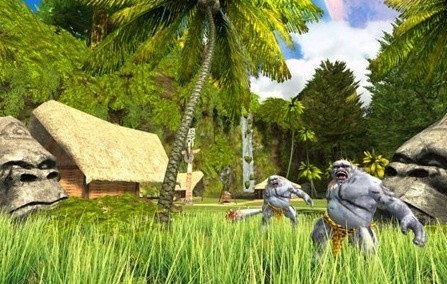 Picking up where Serious Sam: Second Encounter left off, Sam has rocketed off towards the conquered planet of Sirius, the new home of the notorious Mental. While en route, the Great Wizards Council of the nearly eradicated Sirian civilization telepathically contacts Sam to aid him in his quest to destroy Mental and help restore Sirius. He is then sent on a quest to find the fragments of a mystical medallion scattered throughout the galaxy that will bestow Sam with the power to defeat Mental.

While Serious Sam 2 is not one of the most intensive games in our benchmark suite, we can stress the system by enabling HDR.

Serious Sam 2 like Doom 3 shows some good difference between the different setups when using HDR at the high resolution.

Our high quality tests let us separate the men from the boys and the ladies from the girls. If the cards weren't struggling before they will start to now. ATI are able to offer HDR and AA at the same time unlike nVidia so we have ran our HQ Lost Coast and Serious Sam 2 test with HDR on.

While 3DMark05 at the low resolution saw the HIS when overclocked being the slowest we can see here though when we increase the load with AA and AF the overclocked X1900XTX from HIS flies ahead.

3DMark06 sees a similar picture with the HIS X1900XTX when overclocked, to the max.

We can see at the high resolution there is a difference in scores with the difference between the Sapphire and the HIS when overclocked showing the HIS option being 5% faster.

The last of our benchmarks show that again the HIS X1900XTX when overclocked provides an excellent performance increase.

The IceQ versions from HIS always have been a good option with the ability to have a better cooler not only in performance terms but also the level of volume output.

This saves you having to spend extra dollars on buying an aftermarket cooler but also having to worry about avoiding your warranty because you're changing the standard cooler as well as overclocking the graphics cards.

The HIS X1900XTX IceQ 3 has a lot going for it - good bundle, X1900 features, an aggressive price and of course the new and improved IceQ cooling which is better then ever.


Rating - 9.5 out of 10 and TweakTown's "MUST HAVE" Best Performance Award