With the system left to do what it does on AUTO for the CPU and PWM active for cooling, we found that the Fuma 2 let the processor reach 56.5-degrees. Even though there are near thirty coolers ahead of it, we are still five-degrees out of the lead. There are a couple of standalone coolers that beat the Fuma 2 in thermals and are cheaper, but none of them are as silent as this is right now!

The gap from first place has lessened with the overclock applied, but again, the Fuma 2 is still silent while doing this! We still see the ETS-T50 AXE, the Ninja 5, Windale 6, all more affordable, with slightly better results, but again, those who want Noctua level silence without the price, this is the cooler to do it.

When we kept the overclock but put 12V to the fans, we see the Fuma 2 skyrocket towards the top of the chart. However, the point here is to see what is left on the table by using the PWM curve. The Fuma 2 gives us one of the widest gaps, with nearly four degrees left on the table, and in most instances, not taken advantage of.

When we say silent, we were not joking around. At this time, the front fan was turning at 525 RPM and the back fan at 650 RPM, but the lack of noise at the 22 dB mark is astounding!

Again, topping the chart when it comes to noise, the Fuma 2 under an overclocked scenario still only delivers 24 dB into the room! The thinner fan is spinning at 680 RPM, and the fatter one is going at 820 RPM at the time we took this reading.

While the specifications for the fans have them both topping out around 1200 RPM, we saw that the front fan topped out at 1144 RPM and the back fan capped at 1227, both within spec. However, we found that with them topped out in power; they only delivered 34 dB of noise. We feel that Scythe set their own limits too low. We would gladly take the extra four degrees in performance had they adjusted the fan curve more aggressively with that little bit of extra noise! 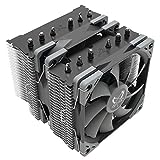