For those on a budget, the Corsair 500GB MP600 NVMe PCIe Gen4 M.2 SSD has all the performance you need where it counts!
Buy at Amazon

With the launch of AMD X570 and Phison's E16 platform earlier in the year several vendors including Corsair went all in being the first to market with PCIe Gen4 solutions. Thus far the MP600 has proved to be a popular choice for many upgrading and while most will choose the 1 or 2TB solution, for those on a budget the 500GB option is available.

The 500GB capacity, like the 1 and 2TB models is offered in a m.2 2280 form factor with black aluminum heat sink. The heat sink can be removed for installation in instances where the motherboard handles cooling capacity with the chipset.

Like the larger capacity solutions, the 500GB model too is supported by the Phison E16 controller paired with DDR4 and 96-Layer BICS4 TLC NAND. That said the 500GB capacity does have slightly different performance and endurance numbers with sequential reads rated at 4950 MB/s and write at 2500 MB/s. Endurance is rated at 850TBW. 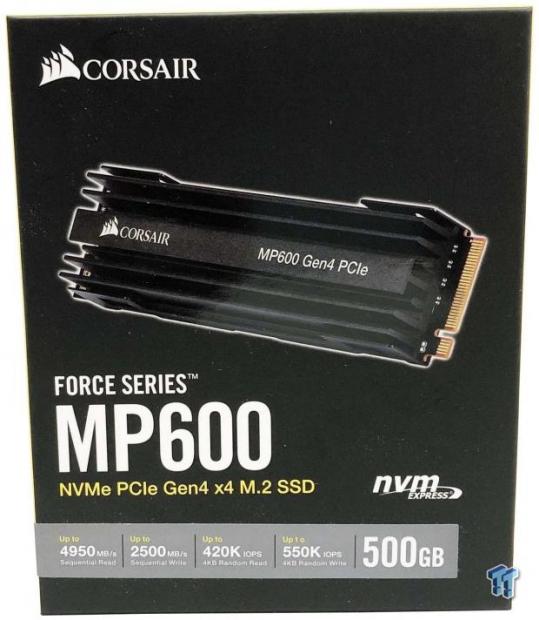 Packaging for the MP600 offers an image of the drive centered with capacity listed along the bottom next to performance numbers. 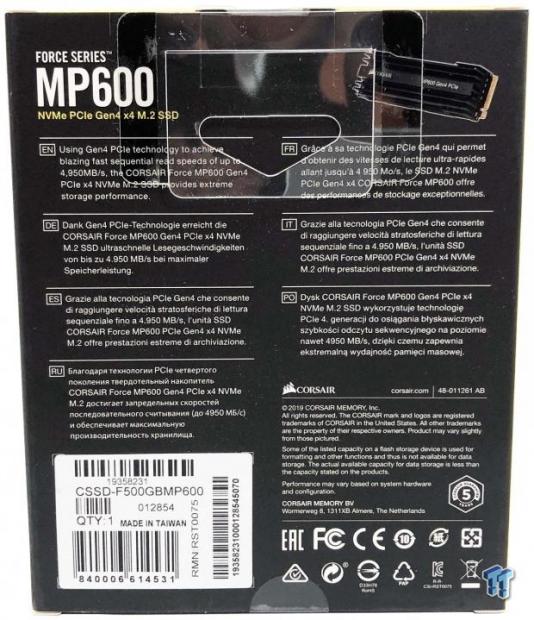 On the back, we have a little more detail in several languages along with the warranty bottom right. 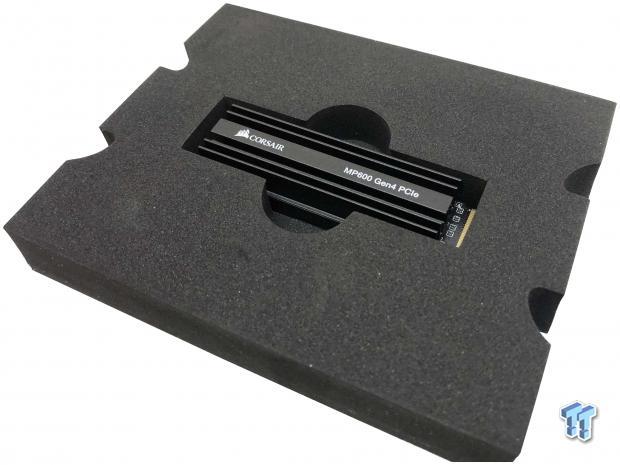 The drive is shipped in dense foam, slotted into its own cutout. 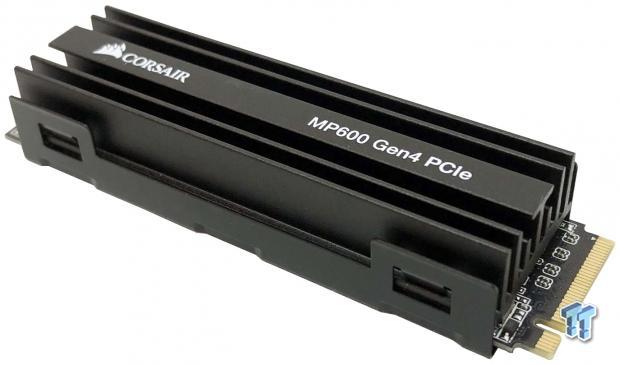 Removing the drive, we get a look at the aesthetics. This drive does appear to be one of the only units sporting a black PCB along with the black aluminum heat sink and backplate.

On the bottom we have the regulatory information on a sticker. 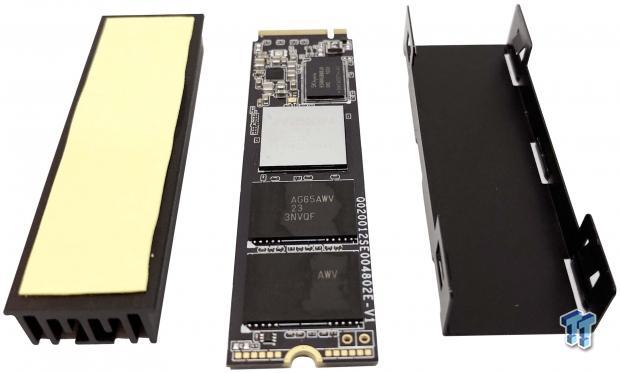 Removing the heat sink, we have a large yellow thermal pad on the heat sink side, little residue is left on the drive after removal. As for the drive, we have SKHynix DDR4 at the top, Phison E16 in the middle and Toshiba BICS4 NAND at the bottom. 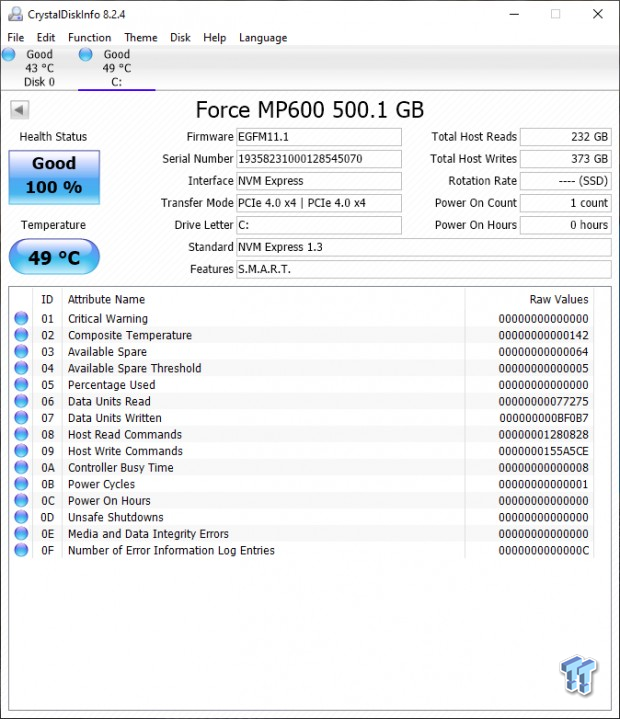 Starting out, we have a quick look at CDI for the MP600. As you can see, we have both NVMe 1.3 and PCIe Gen4 supported along with SMART. Firmware was updated to the latest before testing. 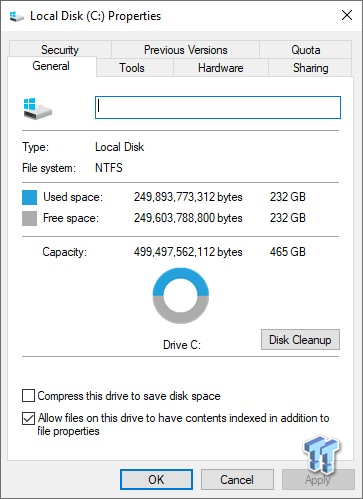 For testing, we first Secure Erase the drive followed by a standard Windows 10 installation. We then fill the drive to 50% for testing. 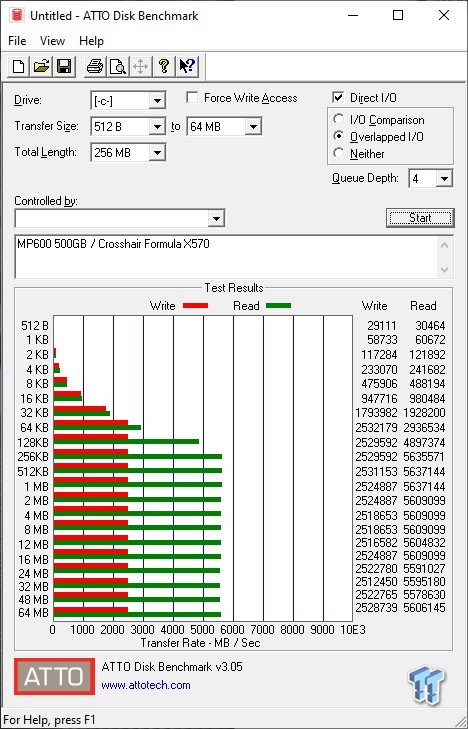 Starting off testing, we have ATTO v3.05 and as you can see the drive performed quite well. We see solid 5.5GB/s reads with writes at 2.5GB/s 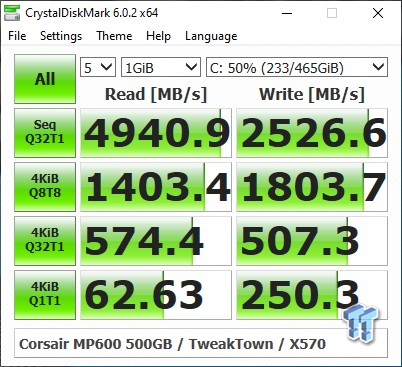 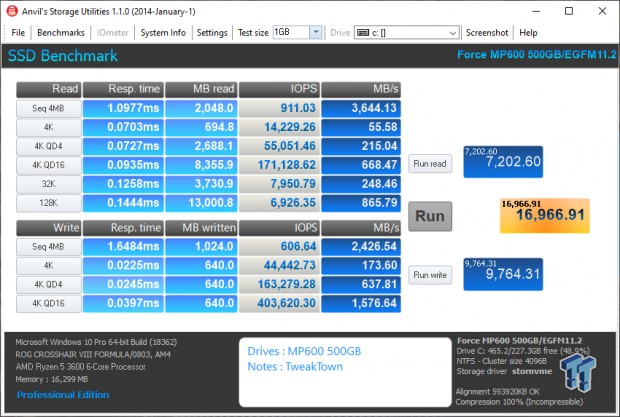 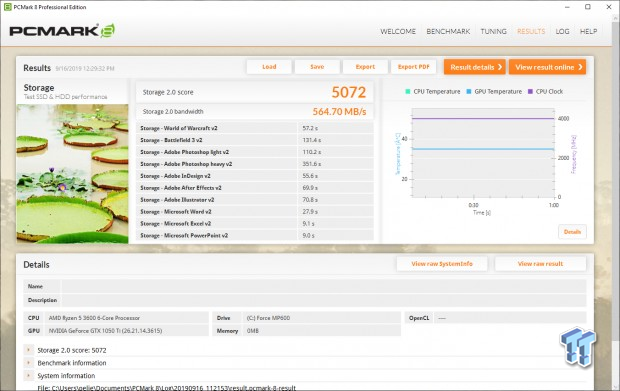 Using the MP600 in my own machine for the last month I can certainly say that the snappiness you felt going from HDD to SSD years ago has returned. Adding to that we have a solid aesthetic with the Corsair solution being all black including the PCB.

Performance is certainly top notch as expected and on par with the larger capacity models where it counts; read. It my testing we saw the MP600 reach peak performance at 256K in ATTO while write reached maximum performance at 64K.

Adding to the MP600 is the Corsair SSD Toolbox which allows you to manage your drive along with updating firmware, something very important for SSDs and even more important for emerging technology such as Gen4.

As for Pricing, Corsair seems to have it locked down with the 500GB capacity coming in at $134.99 as of this writing with competing solutions such as the Aorus NVME Gen4 coming at $158.99. 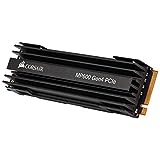 For those on a budget, the Corsair 500GB MP600 NVMe PCIe Gen4 M.2 SSD has all the performance you need where it counts!