When I came into this review, I had received the chassis and was interested as the R6 is a pretty solid chassis. First, look at the Vector RS, and I knew I recognized the base chassis with the R6 features or very close to for the most part. I have had my main rig in an R6 for a while and recently transitioned to the Meshify S2 to ensure I fit my liquid cooling components. Now with the Vector RS, I feel like Fractal opened the doors for users to select the chassis they want to build and enable changing things mid-stream should you upgrade to liquid cooling.

Thermal testing is what got us excited as we wanted to see how close to Fractal expectations they came with the Vector RS. Our measured ambient for standard and vertical GPU testing had a measured ambient of 23.1C and an RH of 45%. First, we tested with standard GPU mounting. The Vector RS showed a CPU ΔT over ambient of 43.7 while the GPU saw a delta of 38.3. Moving to vertical GPU testing we saw a CPU ΔT of 41.5 while the GPU rose to 39.4 which may not seem like much, but we also saw spikes of up to 3 degrees C over the standard GPU mounting.

The GPU does sit quite close to the tempered glass panel, and that shows its impact on the GPU. The fact we are running a robust MSI Gaming Z model RTX 2060 is likely why we did not see major thermal issues, but a more powerful card will likely suffer far more from being so close to the panel where it cannot get adequate airflow. This is not all doom and gloom, keep it in mind as it will cause your card to throttle sooner in this orientation or at least can do so. Overall the chassis passes thermal tests but with the above note on a vertical orientation. One last note on the vertical GPU, which is if you are liquid cooling the GPU, then this is a non-issue. There a lot to like about the new Vector RS from Fractal Design. Firstly is that Fractal chose the right base chassis which gives so many options it's almost dizzying to think of. Fractal offers modularity to make the Vector RS just how you want it whether it be in the default aesthetic mode. Next, you can swap it to airflow mode, which is more of a function over form approach, but even that does not at all take away from the aesthetic in my opinion. Fractal also found a way to push the line just a little further into RGB adoption with the integrated top/front stripe lit by ARGB. Overall if you like the Define R6, you will love the Vector RS, or at least the base chassis, the exterior is entirely up to your style preference.

There's very little not to like about the Vector RS. Fractal did a great job with chassis choice and ensuring that a lot of the right boxes are checked. The only thing I could think of that would be better would be if the pre-installed fans were PWM as such a premium case at a premium price you expect that. Other than that, I'm a bit hard-pressed to find more knits to pick. I could go on about my disdain for what happened with the panel, but let's face it, that can happen with pretty much any tempered glass panel, and we simply were unlucky.

The $179.99 price point is always rough, and you have to offer features to justify this. The base chassis being similar to the Define R6 gives it some significant credibility, and when you start building in it that credibility only increases. The Vector RS offers more modularity a little bit of flair with the ARGB stripe and a robust platform to build your dream PC. If you had an aversion to trying out a Fractal Design case, rest assured the Vector RS is probably one of the most competent cases I have seen in a while.

Fractal Design made the Vector RS into a mid-tower chassis that will be very tough to beat. 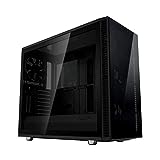 Fractal Design made a good design even better. The Vector RS is a solid performer with tons of features and a laundry list of fitment capabilities that any enthusiasts is sure to love.