Another ROG STRIX card, another home run for ASUS. The new ASUS GeForce RTX 2080 SUPER ROG STRIX is another great card to join the ROG ranks, something that will have a great place in your gaming PC. It has a great-looking triple-fan cooler, super-cool operation (just 62C under load) and has room to breathe when it comes to overclocking. It keeps up with other custom RTX 2080 SUPER cards (they're all going to be roughly the same) but stands out on its own with its style, design, and temps.

Performance wise it is a champion, carving through games at 1440p, 3440x1440, and even 4K without a problem. I'm a heavy Apex Legends and Overwatch player, and the ASUS RTX 2080 SUPER ROG STRIX handles those types of games at 120FPS or higher without a problem.

I even got a bunch of play time with the ASUS ROG Swift PG35VQ (my review here) -- their beasty 3440x1440 @ 200Hz G-SYNC ULTIMATE gaming monitor. I teamed the ASUS GeForce RTX 2080 SUPER ROG STRIX with it for just over a week of gaming and it was an awesome one-two punch combo. You won't be getting 200FPS+ at 3440x1440 on an RTX 2080 SUPER, hell even the TITAN RTX (which costs $2499) can't handle that in the latest games. But, esports games shouldn't be an issue -- so if you were playing CS:GO or Overwatch on it, you're going to have an amazing time with that combination. 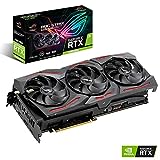