To install the vertical bracket, you must first remove all of the expansion slot covers. In the case of the P360X, as you can see above, it now has a wide-open area to install. If you use this bracket on a case with strips running between the expansion slots, you would have to remove these for the bracket to work as intended. With the bracket firmly mounted, we now move inside. Below the bracket, you may notice we stacked a few pieces of the foam we showed previously. This foam has a sticky side which can be used to fix the foam to the GPU bracket. The bracket then rests on the PSU shroud and supports the GPU weight to keep it sitting correctly. You will also notice we routed the rubberized striped ribbon up to the main x16 PCIe slot. Here we have the rear opening with the GPU installed on the vertical bracket. One thing to note is that now you can see what I was previously referring. All of the other PCIe slots we had previously are now technically unusable, so that's something to consider for users who may have anything from an audio card to thunderbolt, RAID HBA or even a PCIe SSD in a slot. This now becomes far more challenging for someone integrating this into a build unless its GPU only. Thankfully for most and Phanteks, most users only install a single GPU with no other expansion cards, which makes this a great solution. Here we have the GPU now slotted. As you may have noticed, we routed the GPU cable behind the GPU to hide the power and everything much better. The vertical GPU does one thing very well, in my opinion. The vertical GPU hides all of the dead space or empty slots that a standard installed single GPU system would have. This vertical GPU orientation has some aesthetic points going for it along with potentially being a better cooling position which we will test shortly. The card vertical even with the system off when fully built pulls off a beautiful aesthetic as the curved dual axial fans look mean in contrast to the motherboard above with a glossy AIO pump. The system now powered, you can see a defined difference in appearance vs. the standard installation. The RGB strips running top and bottom of the dual fans on the GPU make a nice contrast to the front and panel gap RGB flow and feels like a more cohesive overall experience. 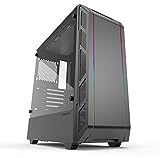