As batteries progressed, we have seen the abilities of wireless products increase to a point to where now, it is much less of a chore to go wireless than it once was. With a full charge on the Ironclaw, we ran the mouse wirelessly for two days, and on the third day, early on, we needed to charge it again. In that, we played games for about five hours each day, and also had the lighting at full tilt. However, there seems to be a low-power mode, as we used the mouse for roughly twenty hours of those fifty hours. So when looking at the numbers in the specifications chart, those are usage hours, not so much the maximum time between charges. Our Bluetooth use was much lower, but with the 10 hours or so we did get to use it, judging by the multi-purposed LED lights, we were using less power per hour of use. With what we said earlier in the review, we still stand behind it. If I were to set two of these on the table, one wired for connectivity, and one with a cable not connected to a PC working over 2.4GHz SLIPSTREAM Wireless, you would still just be guessing after using them!

The mouse is full of features, and the build quality is quite good as well. It is rare, but in the end, we cannot come up with anything to moan about. We would rather the switch for connectivity options did not require one to flip the mouse over to access it, but we get it. Flipping the switch is not something you are likely to do mid-game or mid-project, so we do not see it as a deal-breaker. Out of the box, the Ironclaw RGB Wireless is a great product, set up ready to take on whatever task you throw at it while looking great at the same time. Usually, in mice with this many buttons, things end up looking like a calculator, or buttons are crammed so tight, you end up pressing stuff you never intended to. Here, this is certainly not the case, as all buttons are easily reachable, yet at the same time separate, and this is not an easy thing to accomplish!

Its form fits our palm-grip style perfectly, and for those with large hands, the Ironclaw is still very usable, although those with smaller hands may have troubles with the taller design, accessing all of the buttons. Along with everything we have described, there is still the iCUE software to ponder, and the advantages, customizations, and personalization possible in it are some of the best out there. We also like that software is consolidated for all Corsair products, and the ability to link the lighting effects across the entire desktop is also tremendous for those who love RGB devices.

While it feels like we left a few things out, that maybe we did not get into super fine detail about, but rest assured, if something was wonky, we would know and would have brought it up by now. That being said, we are impressed! We will be cycling this mouse from the gaming system down to one of our test systems, as the fit, feel, and functionality is too good to let it rest on a shelf. To be blunt, Corsair could charge way more for the Ironclaw RGB Wireless, to the tune of $100, maybe even more, but thankfully they aren't!

With all this Ironclaw is capable of, with three options of connectivity, multiple RGB LED zones, sleek styling, and something perfect for any PC use, at just $59.99 right now, we suggest you buy two of them! Really! The reason being is that when the mouse gets to your house, and you get some time with it, you will soon realize what a perfect fit it would be for a laptop, living room gaming, the day to day grind at work, or any other possible use where a mouse is intended! It is rare, maybe five times in seven or eight years, where we were so pleased with a mouse of any nature, and Corsair has given us one more to add to that list! The Ironclaw RGB Wireless Gaming Mouse is the perfect solution for those who prefer to have a mouse with performance, functionality, customizations, and is all tied up in a bow and offered at a very affordable price. 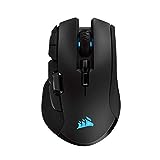 Corsair's Ironclaw RGB Wireless is the most feature rich mouse for the price out right now. If ever there was a time to try out wireless gaming, this is the time! A perfect storm of pleasing styling, great feel, accuracy, and customization!