Inside the K57 RGB Wireless Once all of the screws were removed, we found a bunch of tabs holding it together, that when gently pulled apart, let go without breaking. Inside we see that there is an opaque plastic portion under all of the keys, which holds the keys into place, as well as helping the CAPELLIX RGB LEDs glow through from the PCB. In the lower section, we can see the rubber dome switches as well as the Li-Ion battery placement. With the rubber membrane gone and the pair of plastic contact sheets folded over the edge and out of our way, we can see the PCB. Each switch is clearly labeled on the PCB for its corresponding function. Each place also sports a CAPELLIX RGB LED which glows through the cutouts in the plastic contact sheets, which allows the opaque plastic and the legends on the keycaps to shine with the most intensity possible. In control of all things, keyboard for the K57 is this NXP LPC11U68JBD100 MCU. It is an ARM Cortex-M0+ 32-bit processor, clocked at 50Mhz that also houses the onboard memory for the profiles, actions, and lighting settings, as well as all communication between features and the PC. For those wanting some verification to the cell used to power the K57 Wireless RGB Keyboard, we disconnected the two-pin plug and grabbed a photo of it. All of the information for work hours, milliamp hours, and rated voltage correspond to what we saw in the specifications chart. Without much more inside to show, we put the K57 back together and plugged in the cable, for power as well as to top off the battery charge. The booth lighting is quite intense and does lessen the lighting effect you see here, but in the darkest room, the 60% advantage over standard RGB LEDs is easily noted. We can say, that for sure, this is the most intense RGB LED illumination we have seen on any rubber dome keyboard to date. 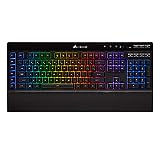