The Phison E12 paired with Toshiba BiCS FLASH memory was never able to reach the stratosphere random read numbers at low queue depths like the models with Micron's 64L/96L 3-bit per cell memory. The Cardea II does deliver strong performance down low that is comparable to Samsung's 970 EVO Plus. On the other end of the scale, at high queue depths, this drive reaches peak IOPS higher than any other 512GB-class SSD in the charts today. Phison and its partners have really tuned up the E12 firmware. In the random write test, the Cardea II again shows us higher peak performance than any other drive on the chart. At lower queue depth, the drive trails the others. This doesn't concern us too much because all modern SSDs with an SLC buffer absorb random writes much faster than older SSDs. In consumer workloads, the random writes are usually very brief, and the SLC buffer catches the data without any perceived performance loss. 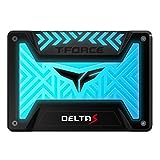