Here we have it, the Zenith Extreme Alpha powering the beastly Ryzen Threadripper 2990WX. The reason we chose this platform is that the CPU itself can consume up to 250W at stock. It can ingest more if you decide to open things up for more overclocking or power room. Then we have several cards we can add to increase loading on the PSU by pushing them via render loads. Loads such as Realbench, LuxMark, etc. which are real-world style loading environments that can scale to multiple installed GPUs. Here we have the dual card loading which is similarly representative to what you would expect in a robust workstation setup. As you can see the draw from the wall is 784W. This is not far from the PSU's stated capabilities and with the zero RPM fan mode enabled it still kept the PSU at a stable 34-35C exhaust temperature. This setup was run for over 2 hours to ensure no errors in the work output or driver failures, which can be a result of power instability.

Now its time to put in the 3rd card and see if the Ion shuts off, or blows up, or melts down. Adding the 1080 Ti to the stack increased power loading to over 1000W while also raising the PSU exhaust temperature to 38-39C. What surprised me the most is not that the ION+ 860P ran at this wattage. But it did so for over 2 hours until I stopped it as it merely plateaued on the temps and kept running without a single sign of power instability. The system didn't crash, did not turn off and kept chugging along without even an issue.

Disclaimer time, I would never recommend running a PC with an 860W PSU where you are drawing over 1kW consistently. I always suggest getting a PSU that will end up meeting your expected load while only loading up to 50-70% of the PSUs advertised capacity. This tends to give your PSU less stress and overall thermal concerns. While it is cool that the ION+ 860P did this for over 2 hours without fault. I cannot with any level of certainty guarantee that if I had kept the same loading on the supply for a month, it would have lasted.

Some render machines are under 100% load for long durations such as that, which is why I would suggest something much beefier if pushing that kind of load. The 860P handled the 2990WX and the TITAN V with full loading at around 426-430W. If I had picked a more reasonable CPU, I probably could have gotten the dual card configuration to around 550-600W which would be fine on this unit. 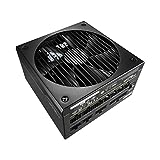