To open the mouse, the feet need to be removed, to allow access to a total of four screws. Once opened, there are no cables to worry about, as the internal layout has all of the components on a single PCB, housed in the lower half of the XM1. Under the left-click button, we see the first D2FC-F-K(50M), Omron, blue switch. The life of the switch is self-explanatory, but the actuation force is similar to all other Omron switches. There is a defined point of activation, as well as an audible click, all be it, a bit hollow sounding. Behind that switch is the rotary TTC switch for the scroll wheel, which we said is highly segmented in its movement. Backing the pair of buttons on the left side of the XM1, we see a couple of TTC switches with maroon stems. These switches are the softest on the mouse but have the crispest clicks reporting back when pressed than any others on the mouse. Not that we do not trust the specs chart, but we like to show what we have to confirm. In this instance, we do indeed have the PixArt PMW3389 optical sensor to ensure any movement made with the right hand is recorded and sent into action on the PC. While this is one of the smallest chip we have seen for an ARM 32-bit processor, it is plenty to control what functionality the XM1 offers. For those wondering, the F041G6 numbers will lead you to this being an STMicroelectronics product. The last internal image is of the second Omron blue switch, again, rated for fifty million clicks. As for the pad switch behind it, that is for the press of the scroll wheel, and when pressed, it needs a lot of force, and again, the report is muffled or hollow sounding. As we do, we reassembled the XM1 and plugged it into a PC. What we end up with is that the XM1 shows all of its cards when you take it out of the box, as there are no visible LEDs, or any visual indicator LEDs visible when under power. If you want to look at LEDs, you have to flip the mouse over. It is pretty easy to see that since two LEDs are lit, we are set at 1000HZ, but the color is also key. Each of the four CPI settings allows a color to be set to it. So even if we are looking at the Hz lights illuminated, the color here indicates we are currently using the second CPI setting of 800 CPI. 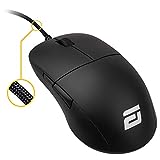