The left side of the XM1 is straightforward in its bulbous shape, with the lowest section being indented slightly for a bit of extra grip. As part of the top half of the mouse, the surface is slick feeling but slightly rubberized, and offers a pair of buttons near the top. The lower part of the mouse is angled inward near the bottom, compared to at the waistline, and there you can see that the materials above and below the line are different. The lower section is rough-textured plastic, with no coating applied. Both of the body lines angle inward towards the heel of the mouse, and flank the Endgame Gear logo, painted on in white.

Similar to the box, the right side of the mouse is nearly identical to what we saw on the left. While the shape, feel, and coating are the same, there are no side buttons to make this an ambidextrous design, even though it delivers an ambidextrously designed shell. The main buttons sit high on the snub-nosed front end of the XM1. The cable comes from the center of the leading edge, and built into the slight gap between the main buttons is a highly segmented, rubber-coated, scroll wheel. The bottom of the XM1 gives us a few things to cover. Most noticeable are the white PTFE, feet, four of them, which allow for slick glide ability on any surface. The company name is molded into the frame, just above the sensors eye, with the product sticker just below that. The last thing to note is the square button used to change CPI and polling rate, with the chart for it as part of the sticker just above the pair of LEDs. As for the cable, there is nothing special about the rubber-coated 1.8-meter length of it. There is no strap for cord tending offered, just a twist-tie, but we do like the inline choke. As for the connection, it is a USB 2.0 connector, and the housing for it has the Endgame Gear logo molded into it. 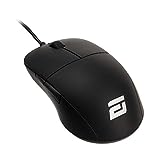