Inside the iCUE 220T RGB Continued The rear area we get an inside view of the vacant fan slot. The rear fan hole only supports 120mm. We also can see the large CPU access cutout, which is more than enough to work on any cooler backplate I have seen to date. The expansion slot covers all have their own hex headed retaining screws, and they are internally accessible vs. some chassis we have seen recently which opt for external rear access to maximize internal chassis space for component fitment. The cable management area of the 220T is reasonably laid out for the space we have available. The HDD cage I can already tell will be problematic as corsairs corners have dual rivet designs which mean there is a roughly 45 degrees strap of metal which takes up almost 2cm of space where you cannot squeeze the PSU in between that edge as you will bite into that edge and the PSU shroud, trust me I did it. I had to slide the HDD cage forward entirely to fit a 140mm PSU into this space which means if you have a relatively standard 160mm PSU, you better remove the HDD cage to save yourself the struggle.

There are two 2.5" SSD trays on the rear of the motherboard tray, and the left-most unit has threaded mounting as an alternate location you can mount the Lighting Node CORE. Speaking of the Lighting Node CORE, you can see it on the edge of the CPU cutout. It is pre-wired, and due to two separate cables coming from the fans, it can be kind of a nightmare to cable manage, but like any RGB device, they are always a cabling mess. The cage for the 3.5" drives are now in view, and as you can see, the last of the five screws to adjust the cage is now visible. While two of the screws at the bottom are slotted unfortunately the rest is fixed which means if properly mounted you only have three levels of adjustment and none of them will support a front mount AIO or radiator with fans. Therefore if you are opting for a front mount 360mm radiator and you are dead set on the 220T you must remove the 3.5" drive cages, so plan accordingly. The HDD trays are plastic and tool-less, they work well to retain a drive and will be just fine if you have mechanical storage to place here. The PSU section is listed as supporting up to a 180mm PSU. Here you can see the lip I had a righteous battle with before I gave up and moved the HDD cage. Mind you this is a 140mm PSU which is basically the shortest ATX PSU you can buy and between 140 and 160mm are the most common sizes.

The fitment of the PSU with the out of the box configuration will be nary impossible without adjusting the HDD cage forward or removing it entirely. I recommend the latter just for ease of your build. The PSU area has rubberized feet for the PSU to sit on which will absorb vibration and avoid scratching to your PSU unless you try to cram it in without moving the HDD cage at which point your PSU may have a few well-earned battle scars.

The front panel cables are as follows, left to right:

As you can see, all of the connectivity is here, and the included fans are indeed DC, which means no PWM control. 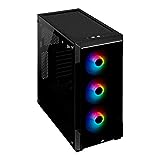