I had my samples pushed from the already overclocked 15.5Gbps to a huge 18Gbps, resulting in hefty performance uplifts in certain games like Shadow of War. The overclocked GDDR6 helps the RTX 2080 SUPER get closer to RTX 2080 Ti performance than any other card, and all without it running too hot. You have all of the already impressive performance of the RTX 2080 with some additional juice, as well as higher-clocked GDDR6 memory. Mix this in with custom RTX 2080 SUPER cards coming and we're in for some exciting times. My custom MSI GeForce RTX 2080 SUPER GAMING X TRIO (review coming soon) runs beautifully cool and has its GDDR6 clocks at up to 19Gbps (!!!). Not only is the new RTX 2080 SUPER FE a whole $100 cheaper than the RTX 2080 FE, and to make the deal even sweeter NVIDIA is hooking gamers up with copies of both Control from Remedy Entertainment, as well as Wolfenstein: Youngblood. Control in particular is going to be the best showcase of RTX features yet, so getting it bundled for free makes it an even more awesome deal.

I'm only warming up to ray tracing and will have a larger article that dives into ray tracing performance of Metro Exodus, Battlefield V, and Shadow of the Tomb Raider. I still think having the ability to play ray tracing-capable games is a good one, and with the additional muscle that the RTX 20 SUPER cards brings, ray tracing now matters. Expect more on this in the next week or two.

Is This The Last Turing GPU?

NVIDIA has filled out its entire stack of GeForce RTX 20 series cards with multiple cards in the RTX 20 series now old enough to be retired (RTX 2060, 2070, and 2080) with the new RTX SUPER cards. We still have the higher-end GeForce RTX 2080 Ti and non-GeForce-but-still-Turing GPU in the TITAN RTX... so is this the end of Turing on 12nm?

Well, it could be. NVIDIA has enough room in between the new RTX 2080 SUPER and RTX 2080 Ti for another card, but what would it be called? RTX 2080 SUPER But Not Quite SUPER Enough Ti? I mean that'd be cool and all, but we know it won't happen. RTX 2080 SUPER Is The Least Super 'SUPER' Card: Sure, there's good performance here with the RTX 2080 SUPER but it doesn't have that same 'WOW' factor that the refreshed RTX 2060 SUPER had. There's 8GB of faster GDDR6 at 15.5Gbps with the OC headroom for 18Gbps, but there's not enough of a performance leap to justify it for most gamers. 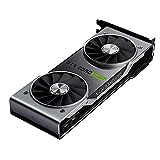