Now that we have built our entire system, we get to give it another look. First, we take a look at the front, and as you can see, I could technically use the original image here. But I did not as the front styling doesn't change and that means that while we could have all kinds of cool RGB components, you would never be able to tell by simply looking at the blank slate that is the front of an NZXT H series. This helps the H series of chassis to fit into offices or home theaters rather easily. Especially if you are tucking it into other equipment where you will only see the front, it could perfectly match a chic setup. Here, we see the full build in the H210i, and while it may look tight in there, in reality, everything went in rather smoothly. We even fit a monster TITAN Xp graphics card which is massive horsepower for a tiny rig. The front liquid cooler can be pulled with the removal of the four thumbscrews on the front bracket to make ample clearance should you want to swap internal components with more freedom.

Do note that we installed the radiator and fans inside the bracket as installing fans outside the bracket behind the front panel would not only omit the dust filter but would severely hamper airflow and cooling performance. Had we opted for push/pull on the radiator we would have had to have gone for a shorter GPU by about 10mm to ensure proper fitment. The rear area is completely stuffed as you can see we went with a large full-size PSU even though we did not need to, to show precisely how much room the H210i has internally. Here we see the H210i fully built, and cable managed. We used a large PSU to show in the worst-case scenario what you would be dealing with to build within. Even with the extra cable length it all was tied back or tucked under the PSU shroud to avoid excess clutter, or a doubled over cable clump which can press the panel outward. If you had a PSU like our standard Silverstone unit with shorter cables, you would be able to achieve much more efficient build. One thing to note is that there are not tons of cable tie-down locations at the lower edge of the motherboard tray, so I found the SSD trays work fine if you do not have drives mounted there. Here it is, the H210i fully built but not powered. In its dormant state, the interior is dark enough that we can make out some components, but they are mostly shrouded in the dark. Now we have the H210i powered on with our built rig, and I must say, with the internal light strip up top and the LEDs for the components this rig has a quite menacing aesthetic and the horsepower to back it up. 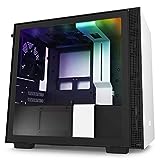