Our first view of the Big Shuriken 3 CPU cooler, the side that would typically face the GPU. The top of the cooler is covered with the 17mm Kaze fan with gray rubber corners, which is screwed to the black bracket with the Scythe logo. The aluminum fins to extend past the bracket with a bit of style to the trailing edges, and we can make out the base of the cooler under it all. From this side of the Big Shuriken 3, we start to see the notches and clearances made for the Zero Interference designs of it. The fan is offset from the fins at the top, covering part of the heat pipes, and in the fin stack, we can see the first nineteen fins are shorter to allow clearance for any sort of cooler that may be on the motherboard, below the CPU socket. How the cooler is shown to be installed on the box, we are looking now at the part of the cooler which would be near the VRMs on the motherboard. Beyond that, we see the braided lead for the 4-pin PWM fan connection, and we also see the five heat pipes as they take different paths through the stack of fins, while also staying out of the way for mounting purposes.

The last image of the sides of the Big Shuriken 3 is a mirror to what we looked at two images ago, but gives is a chance to look under the fins for some more details. First, is the fact that the crossbar mounting system is already attached to the base to make mounting that much easier, and secondly, we see the two-part base assembly where the copper puck is under the pipes while a thicker chink of aluminum is used above the pipes. As we look down through the fins from the top, we see that the nine-bladed, Scythe Kaze 120 Slim PWM fan covers the fins well, and we also can see the gap at the top, where the fan adds more cooling to the pipes, even before the heat enters the fins. The fan needs to be removed to mount the cooler, and it also gives us a good look at the leading edge of the fins. Most of the surface of the fins are flat across the length, but nearer the sides, there are stepped sections of fins. Also, notice that there are gaps in the fins near the back. Those are there to be able to access the mounting screws on either side, while the one in the middle was used at the factory to screw in the crossbar. Since many of the side views did not show the bottom of the cooler very well, we flipped it over to grab this shot. Now there is no doubt about how the cooler is notched, and where Scythe left fins as long as possible to increase the surface area. It is a shame that this view is hidden, as the fins are all perfectly straight and evenly spaced, and it does show more of what goes on which this cooler than any of the others. The copper base is machined into a slightly convex shape, and while most of the surface has an orange peel effect from the later plating of the surface, at the center, there is a defined ring left from the machining process. 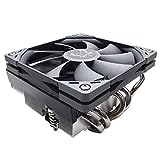