At first glance, from the front of the Freezer 34 eSports DUO, it looks just like the Freezer 33 series. The only signs of a change are in the density of the fins behind the fan and a slightly different curvature to the heat pipes at the bottom. However, we were a fan of the matte black and bright red when we first saw it, and we still think it looks just as good today. The right side of the cooler shows a stack of 54 fins with their edges bent to capture all of the air flowing through the tower, with the Bionix P120 fans flanking either side of it, held in place with wire fan clips. Under the stack, we see a significant difference. While the Freezer 33 has all four pipes in parallel, the Freezer 34 has the center two venturing towards the outside edges of the fins almost immediately after leaving the base. The back of the tower is nearly identical to the front, other than the view of the back of the fan blocking a clear view of the fins. Rather than having the information molded into the frame like the F120 fans, the BioniX P120 fans have a sticker on them to deliver the model number and power draw. The left side of the Freezer 34 eSports DUO is the same as we saw on the right, identical in almost every detail. Along with having to wipe off the immense amount of rubbed off cardboard particles from the cooler, we do see just a slight bit of damage to the lowest fin, nearest the fan on the left. This is an easy fix like wiping down the cooler, but we would imagine, that any internal packaging would keep these sort of things from occurring at all. The top view of the cooler has changed dramatically. The louvers have been removed in favor of the company name a logo pressed into the fins. On top of that change, rather than each pipe having its direct airflow hitting them in the Freezer 33, in the Freezer 34, each pipe has another than follows right behind it this time. With the fans removed from the tower, we can see the saw-toothed pattern of each fin edge. The sides are flat for just a few millimeters to help with the support of the fan frames, but the pattern cut allows many places for the airflow to build a bit of pressure before entering the cooler.

There the four heat pipes originate, is from a solid block of aluminum, into which they are sandwiched. The aluminum is less for cooling and more for the ability to mount more hardware to it. The ends have grooves to help lock in the brackets, and a screw is used to secure the bracket into the aluminum base. The base is assembled by laying the heat pipes next to each other, applying TIM to them, and wrapping them with the aluminum block. Once they are joined, the entire surface is machined, and we can still see the remnants of that process. Even though the base is not perfectly polished, the surface is level when an edge is held against it, with no convex shape to it. 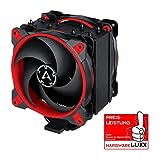