Gaming was a bit odd at first, as the SP80 is quite small in the hand, and lends itself more to claw gamers or those with exceptionally small hands. Once we got into the swing of things, we found that any CPI over 1600 was worthless to the end-user. At this CPI setting, we were able to get into games, movements were fast and second nature, but had you not told us that these were optical switches, we would never have known.

Everything feels normal, and after roughly a week with the SP80 we are back up to a level where we feel comfortable using this mouse, getting those headshots on point again, and being trigger happy in Doom splattering guts all over the room. On the basic level, we have no issue with the way the mouse works or our ability to game with it in the end.

However, we have to address the software here, and this leads to a moral dilemma. In our mind, cheating is bad, and offering the ability to circumvent a games design and the skills needed to play it is a slap in the face. We even went as far as to test what the Headshot software has to offer, and with another writer for TweakTown, went into the PUBG Training Mode to have a go with it.

After picking a gun that is near impossible to control, like the DP-28, we changed things in software and tinkered for a while and came to a shocking realization. With what I was able to do in software, I took a seventy shot clip, and was able to put all rounds into a pumpkin size spread, where by default the recoil will make the gun lift and shot a bullet into the wall about once every foot.

That means I can open fire on anything within a hundred yards, and at least fifty percent of my bullets are not hitting the target. We also tried it with a few other guns, and you can do things like auto shooting a bolt action rifle if you get the timing down, and with things like the SLR and SKS, you can essentially turn them into soda can hole producing ARs. While many will run to the shelves for such an advantage, Bloody claims no liability for what their software does, so if or when you get banned for using the Headshot software, that is your problem to deal with.

As far as functionality and programmability is concerned for productivity, we see no real issues with the SP80 here either, as long as you get the CPI right. What we meant earlier about anything over 1600 CPI being worthless is due to the fact that we feel Bloody tuned their mice too far.

While the claim on the box is 1:1 raw input, if that were the case, every other mouse maker on the planet it then artificially retarding the performance of their sensors, and that would make no sense at all. Even at 1600 CPI were felt like we were in the 5000 DPI range of any other mouse we have tested.

We attempted to use more of the 12,000 CPI range, but anything further leads to things like overshooting the target, or that the mouse will make micro-movements when it comes to double-click an icon, causing frustration and lost time. As long as you are aware of the difficulties of what Bloody considers 1:1 performance, you can find a happy medium, just nowhere close to what you would expect to setup the mouse according to any other mouse you have ever used. 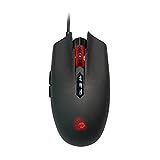