Inside the Lancool One Digital The front panel popped off without too much force but was affixed well enough I would not be concerned with it coming off unintentionally. It is a plastic panel except for the aluminum parts attached on the front of it. There is a wire fixed to the ARGB front panel strip which means you cannot take the front panel too far from where you see in the image. The front fan filter is a mesh type with magnetic mounting. This, of course, means that it comes off easily for cleaning. While the front panel supports up to three 120mm fans, it comes out of the box with one mounted in the front as an intake. The Lancool One Digital is a blank palette inside with a vast expanse to mount hardware. The ATX motherboard mounting standoffs stop well short of the cable management grommets. I see no issues at all with fitting any modern equipment in this case. It could even make for one very awesome looking liquid cooled rig should you have the ambition and like the styling enough to do so. The front as previously mentioned can fit up to three 120mm fans, of course, there is a section of the PSU shroud which will need to be removed to do so, but that's pretty standard. The pre-installed fan is in view here, and it is middle mounted on the front panel. There is not HDD mounting in sight, which is good as it makes for a clean open space. However, I also do not see any reservoir or pump mounting, which means for custom liquid cooling, you will likely be drilling some holes depending on where you want to mount components. To see the top of the Lancool One, we had to remove the top mesh panel we showed previously in place. IT lifts away but is heavily affixed thanks to strong magnets, so, you do not need to worry about it coming off accidentally unless you drop your entire system or something equally jarring. The fitment here is up to triple 120mm as mentioned previously or dual 140mm fans.

I do like the amount which Lian Li spaced the mounting from the board, which means that 120mm based radiators should clear all but the most extremely tall memory DIMMs or motherboard heat sinks. The mounting is slotted, which is nice as it means we can fine tune fan or radiator placement to look and perform pretty much; however, we see best. Motherboard fitment should not be an issue, as I mentioned previously. It comes with ATX standoffs preinstalled, so the only time you may need to add standoffs would be for an mATX board. The CPU cooler access hole is massive. There is three cable pass through holes at the boards leading edge which is also fitted with grommets to help hide cable clutter. There are also three top-mounted holes to pass through cables which can help when running AIO or 8-pin EPS cables. The PSU shroud is solid front to back, which means it hides everything below. The front portion has a removable plate to give extra room for radiator fitment on the front panel zone. The top of the PSU shroud offers three elongated cable pass-through holes which can be used for lower I/O connection along with GPU cable pass-through. There are also dual plates which reach can mount a 2.5" SSD, or they can be removed for airflow. Now we removed the dual SSD mount plates, and as previously mentioned you can now see the sizeable slotted ventilation opening. This will allow up to two 120mm fans to be installed which can push air towards installed GPUs. 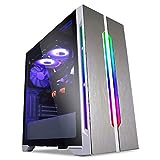