When I first started with the Panzer G, we were admittedly unsure as Cougar is not a name we see regularly. We walked away a bit surprised as at the $100 price point it had some tricks up its sleeve to allow for a quite competent gaming rig. In our testing, it kept all of the components within reasonable temps and only was loud when pushed for a very long period under the most extreme stress test load we could apply. We are also happy to report that removing the front panel to test airflow impedance we observed a mere 2C improvement in delta over ambient on the CPU and 3C on the GPU. This tells us that while I thought it might be a significant choke point, it was minor and not a huge area of concern.

The Panzer G did some things right. First, the Panzer G has triple ring lit fans in the front that do a decent job of feeding cooling air to the system and adds a pleasant aesthetic to the front of the build. The tempered glass plastic film is a blessing and a curse as it protects the finish but is a pain to disassemble everything to remove. The Panzer G has plenty of room to be creative with a liquid cooling build or even as a modding palette.

With most cases, we can find some grievances, and the Panzer G does not get away unscathed here. Firstly the gold is a bit off-putting at least as a personal feeling. Gold is a rare thing in the case world and even more rarely done well. The mix of brighter silver with darker gray plastics is an odd addition when the entire plastic surround being either the brighter or darker option would likely flow much better.

The slimness of the case limits cooling compatibility as we experienced with our 240mm AIO installation and therefore I would strongly recommend 140mm based AIO or custom liquid cooling in the Panzer G. One QC point would be the threading for the fastening of the tempered glass panels, it is merely rough and not a smooth experience.

This leads to the choice of risking damaging the plastic the knurled nut is seated into or just leaving one of the mounting points loose. Lastly, we would like to see better fan filter options for the bottom as it looks to be a real chore for anyone who builds in the Panzer G and will likely result in them just never being removed or cleaned.

The Panzer G comes to market at $94.58 at the time of writing, and as said before this is a rough price point to find yourself in as there are many excellent case options at this level.

The difference with the Panzer G is that it comes in at a full-tower size and many popular options such as PSU shrouds, the LED ring included fans and a swath of tempered glass. With all of this and the issues previously mentioned, I would feel comfortable recommending the Cougar Panzer G for someone looking for a competent case that they were not looking to build immense liquid cooling into, and preferably a build more like the one we assembled today.

The Panzer G is a solid case but take the marketing points for what they are, marketing. Liquid cooling will not be a dream in the Panzer G; it will merely be passable. 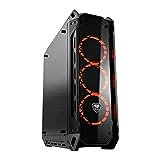 The Panzer G does a reasonable job with its feature set and ability to balance aesthetics and performance.