Heatsinks on flash controllers aren't a new concept, but it's becoming a novelty on small form factor SSDs using the M.2 form factor. 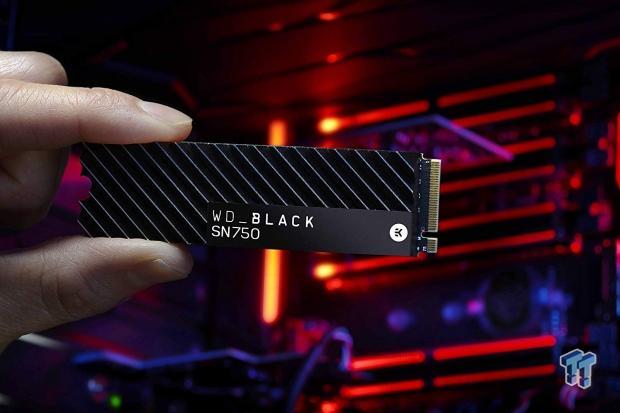 You should think of the flash controller like a processor, the main component in your PC. SSD controllers are intelligent and have to process more data than most realize. Those calculations require switching and power, so they produce heat just like your CPU and GPU, two components that we associate with heat sinks used for cooling.

Like other processors, newer SSD controllers use progressively smaller lithography nodes to decrease costs and increase efficiency. Western Digital has kept a tight lid on it's custom flash controller's architecture, but we suspect it uses a 28nm process node similar to the Phison PS5012-E12. 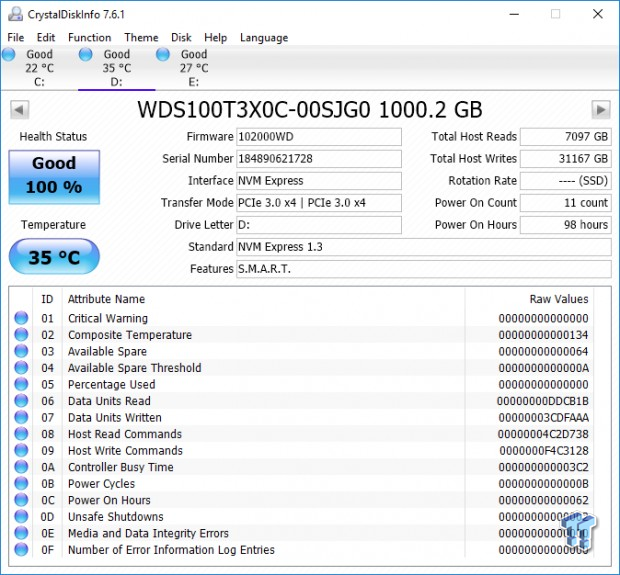 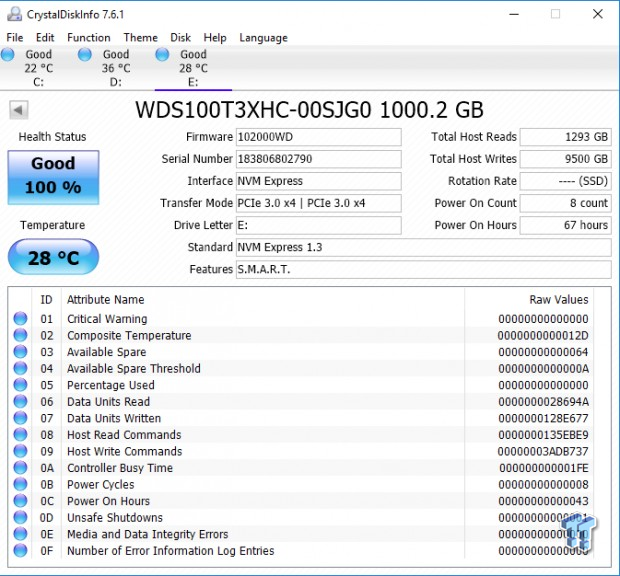 The 28nm node is a significant improvement over the 55nm node used on controllers like the Phison PS5007-E7. The E7 generates quite a bit of heat. The controller could idle in the high 40-Celsius range. The WD Black SN750 idles at 35-Celsius, and the heat sink model lowers the idle temperature to just 28-Celsius.

Most companies configure thermal throttling on a curve. The less obtrusive throttle usually kicks in around 75-Celsius. Some drives use a mid-throttle in the low 80-Celsius range and a severe, self-preserving at 85-Celsius. Every company uses different settings and techniques, so the values change. They can even change from one firmware revision to another.

To discuss how a heat sink helps users we first must pick a number where the controller decreases IO performance to reduce the temperature. We will just use 80-Celsius as the throttle point. With that set, we can look at the idle temperatures, 28 and 35-Celsius.

Right off the bat, the heat sink SSD gives users more headroom before engaging the thermal throttle feature. That's not the most important or even impactful effect. The heat sink first absorbs heat from the controller and then increases the surface area for the heat to dissipate compared to the bare controller.

This reduces the time it takes to reach a thermal throttle condition; it can even eliminate it if there is sufficient airflow. Using a hypothetical number, let's say the bare controller throttles after writing 200GB of data. The heat sink could extend the data writes to 500GB or more before throttling.

The WD Black SN750 now ships in both versions, the naked M.2 2280 form factor SSD we tested in January and the new version with an EK designed heat sink. The heat sink version we're testing today was announced with the original Black SN750, but shipping didn't begin until last month.

The heat sink series ships in three of the four overall capacities, 500GB to 2TB. The 250GB Black SN750 doesn't have a SKU with the heat sink. At the time of writing, the 500GB and 1TB heat sink models were on Amazon and Western Digital's own website for sale. The massive 2TB was not available, yet. 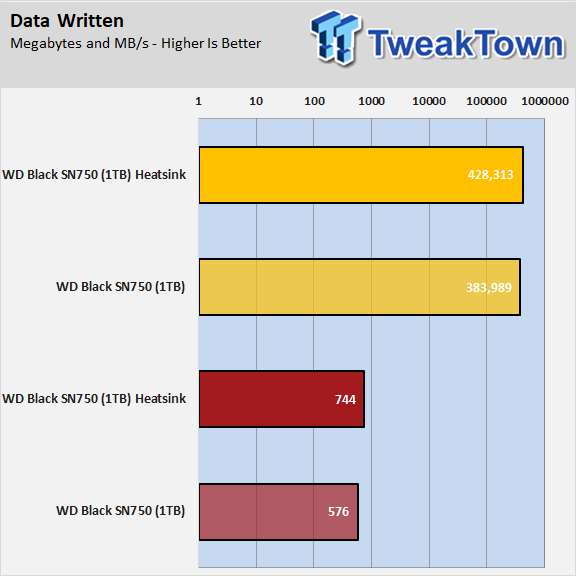 In the chart above, we wrote 128KB block data to both 1TB Black SN750 SSDs. The orange bar show the amount of data written in ten minutes at queue depth 1. The Black SN750 with a heat sink wrote just over 44 gigabytes more than the non-heat sink version. The average megabyte per second increase (red bars at the bottom) was 168 MB/s. 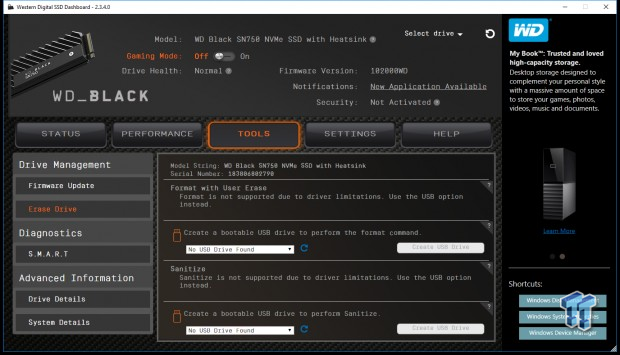 When WD rolled out the new Black SN750, the company also unveiled a new Dashboard software. When the software detects a SN750, it gives users the option of enabling Game Mode.

The Game Mode feature disables the lower power states of the Black SN750. This reduces latency and increases what we call the user experience. SSDs will move into a lower power state to reduce power consumption. There are several power states but not every company uses them all.

The latency comes from the time it takes to turn everything back on. If you have soft lighting in your home or car, you can use that as a reference. In this case, you turn the power and over a split second, the light comes on with a slight transition between off and full light. This happens much faster with an NVMe SSD but any delay or transition state adds latency. Game Mode eliminates the transition because it keeps the drive ready to move data at high speeds. 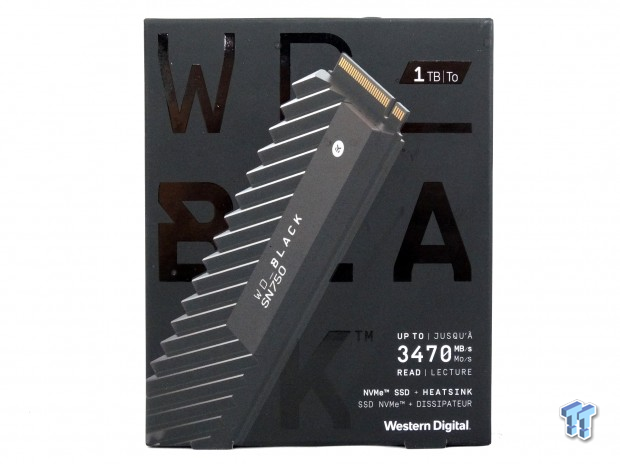 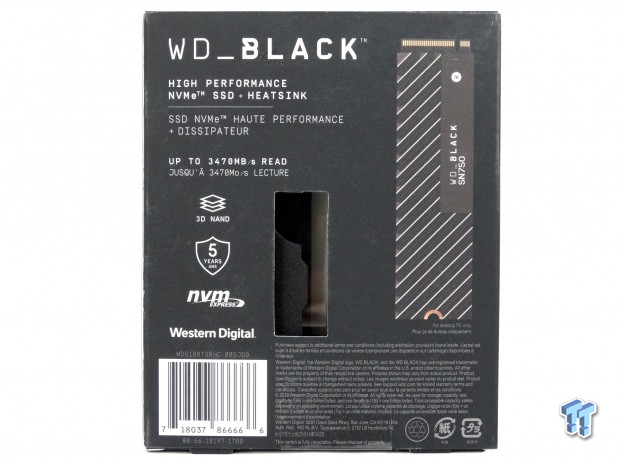 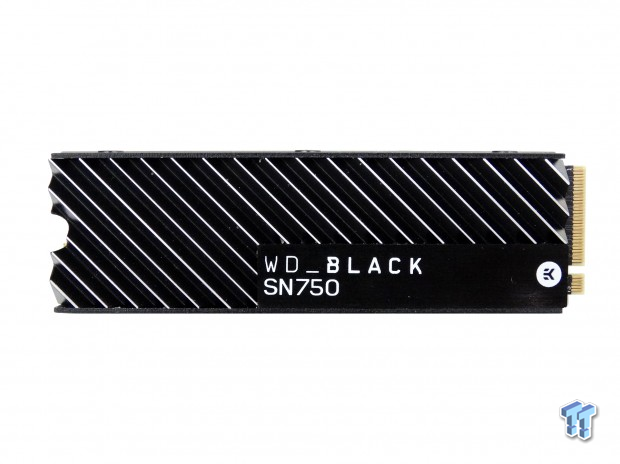 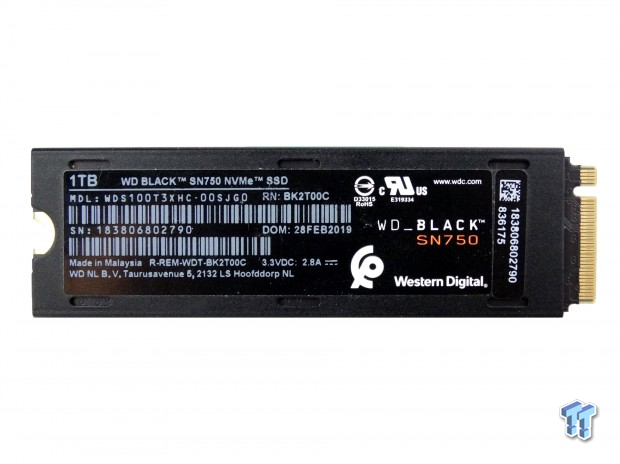 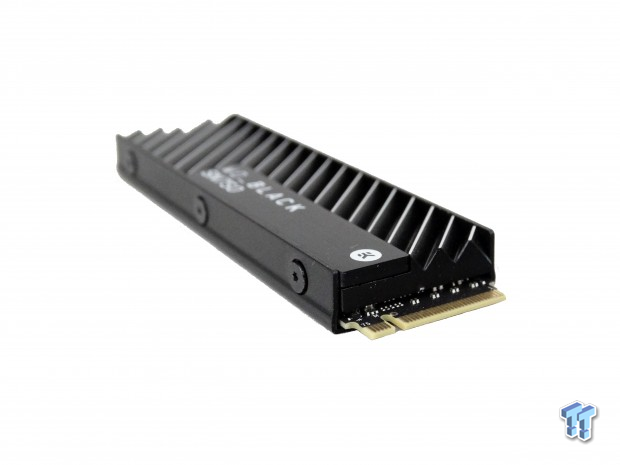 We recycled the charts from the first Black SN750 review. The heat sink version of the Black SN750 joins the original version. We also included two Samsung 970 Series models, the EVO and Pro. The two new Silicon Motion, Inc powered SM2262EN join the group, the ADATA SX8200 Pro and HP EX950. Finally, we also have the MyDigitalSSD BPX Pro. 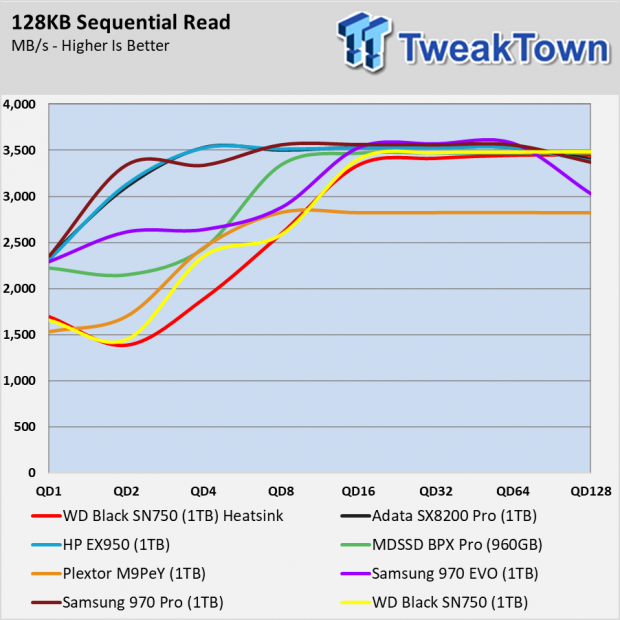 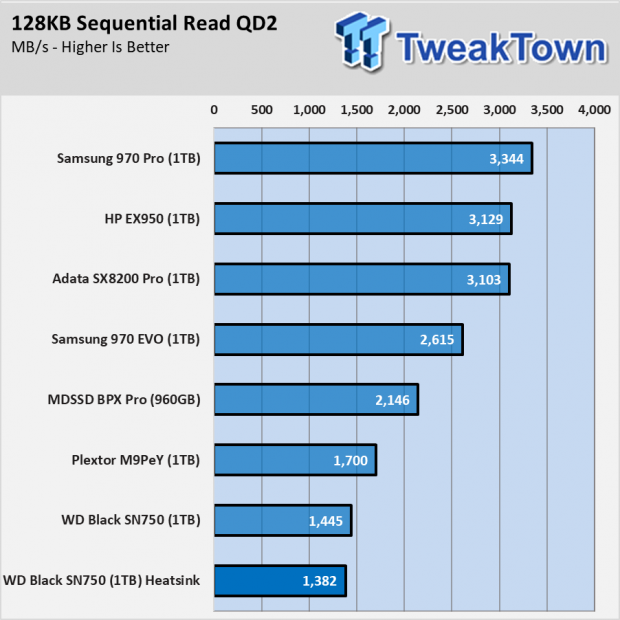 The two Black SN750 and MyDigitalSSD BPX Pro have an issue with our testing script. The queue depth 2 and 4 results are lower in our test but not when measured with other software. For this reason, we will skip over the sequential read performance for this review, at least at low queue depths. At high queue depths, the WD Black SN750 matches the performance of the other drives at the upper limits of PCIe 3.0 x4. 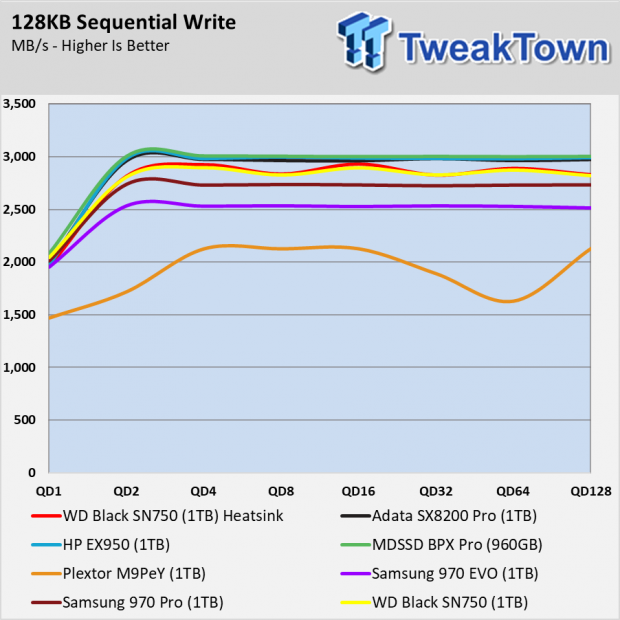 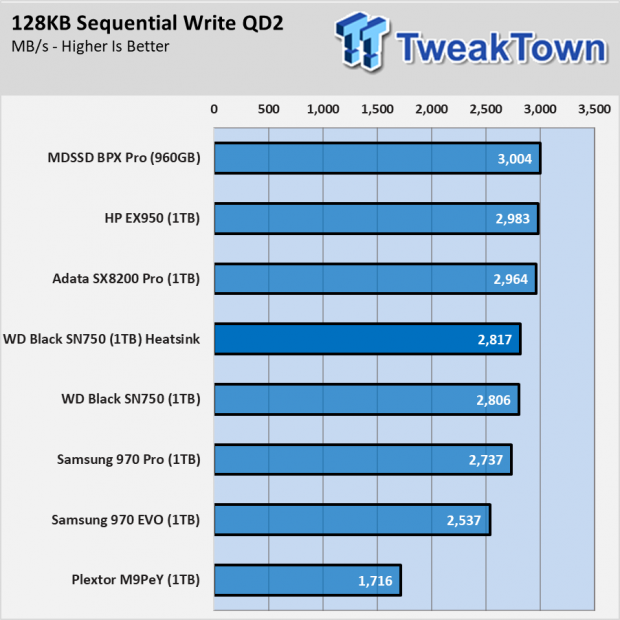 As mentioned, in burst testing there will not be a deep divide between the two Black SN750 SSDs. The drives delivers excellent sequential write performance when you only need to move a small amount of data. 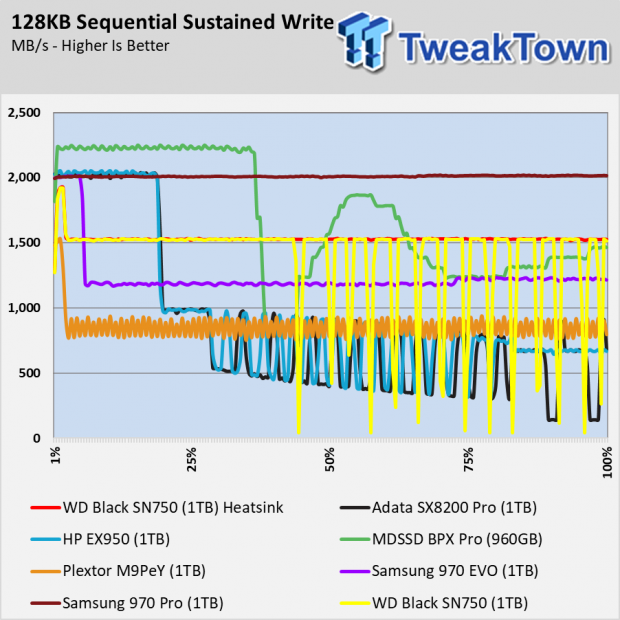 The Black SN750 uses a small SLC cache for data writes. The cache is large enough to consume random write bursts but doesn't have the same capacity as many of the other new drives with dynamic cache for extended sequential writes. 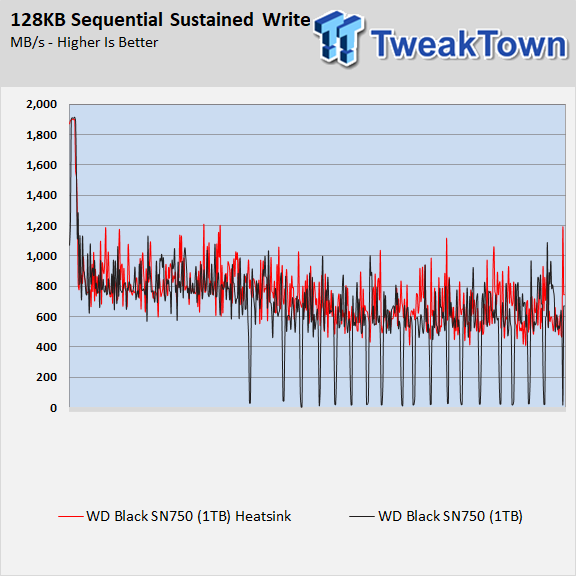 The results of this ten-minute test are what we used on the first page to determine the amount of data written between the two Black SN750 SSDs. The two show in more detail how the non-heat sink version develops performance drops when the controller reaches 80 degrees.

You can also see this on the previous chart. Users can transfer around 400 GB of data on the 1TB drive without a heat sink before throttling starts. 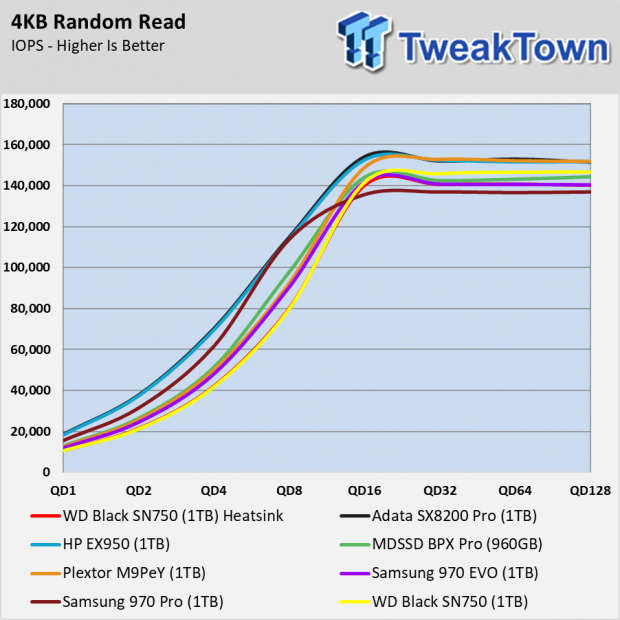 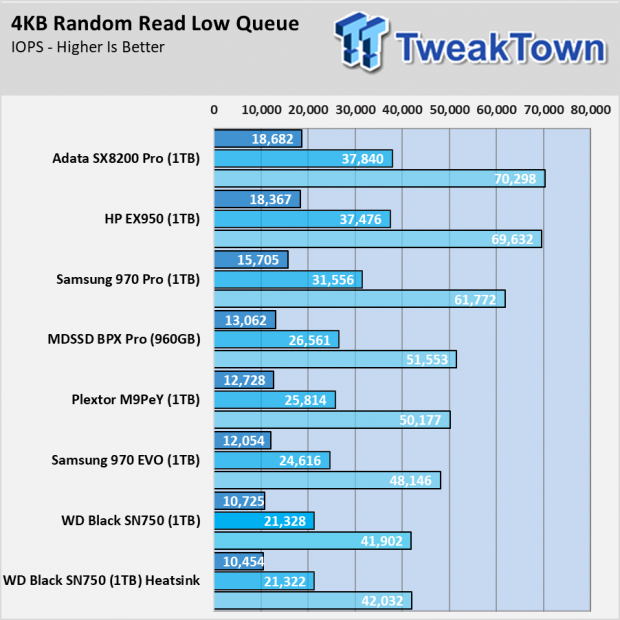 The Black SN750s only tiptoe past the 10,000 random read IOPS mark at queue depth 1. W would like to see more performance in this area. It will also come up later in this review when we start testing with applications. 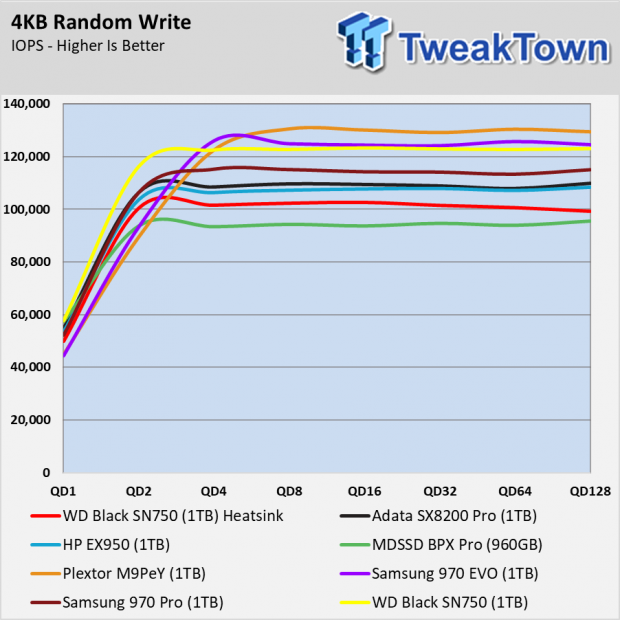 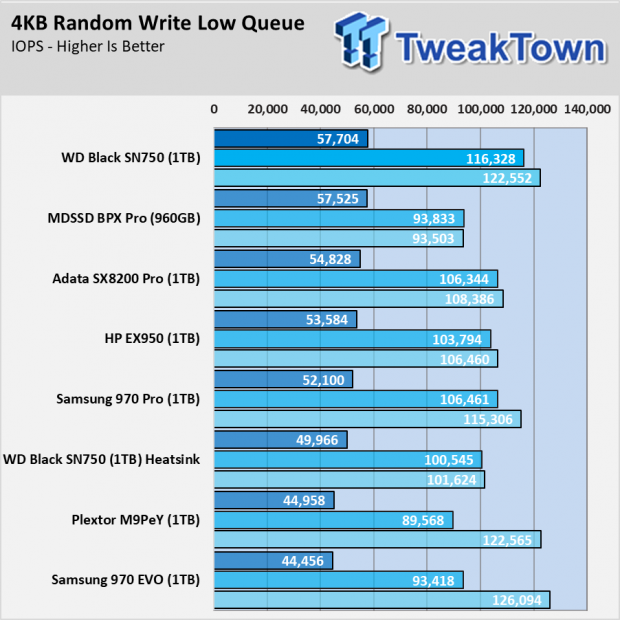 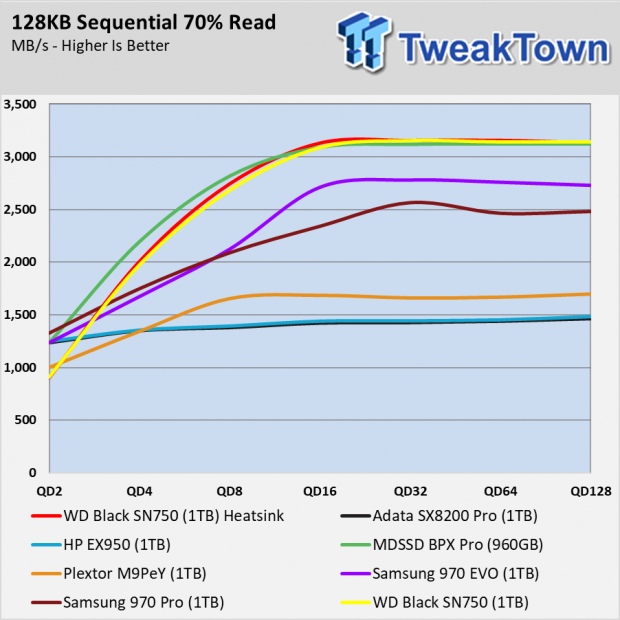 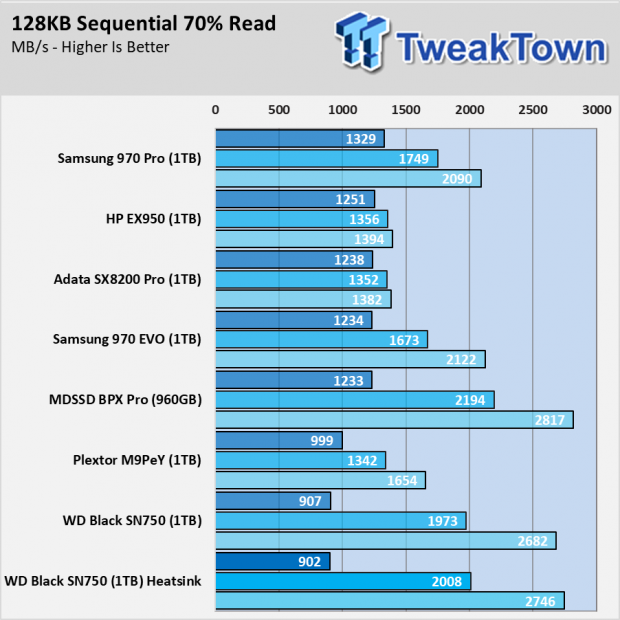 Most applications function as mixed workloads to the storage. The Black SN750 performs extremely well in the sequential 70% read mix test. The architecture behind the Black SN750 is far superior to others when mixing large block size reads and writes. 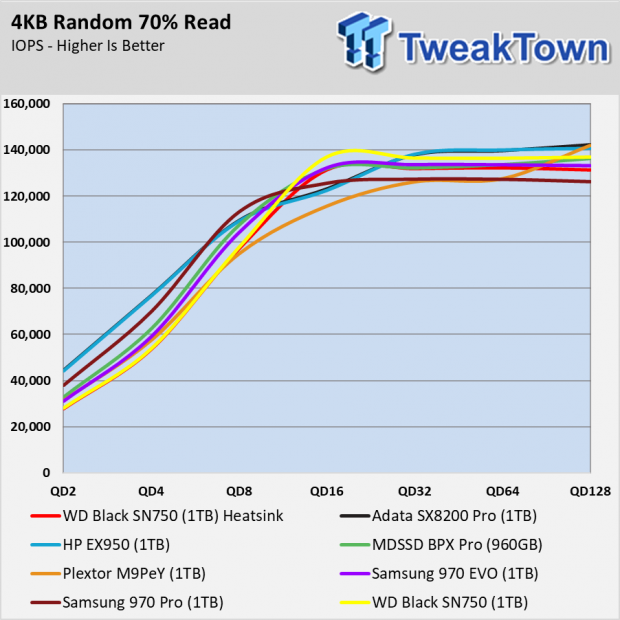 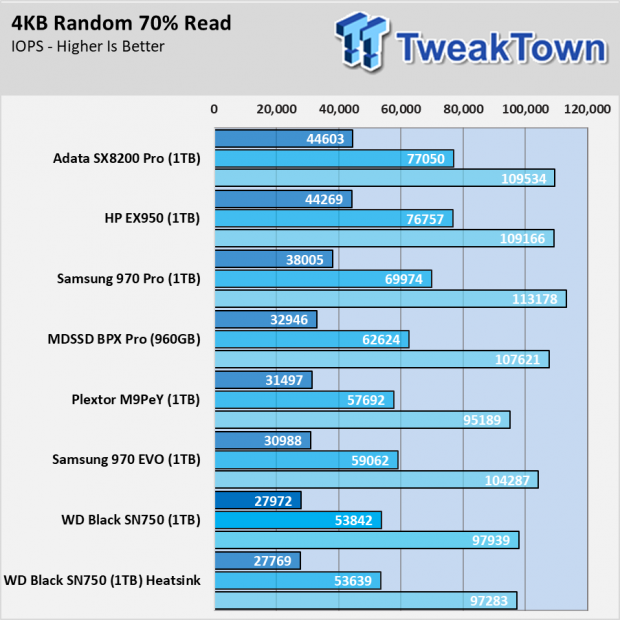 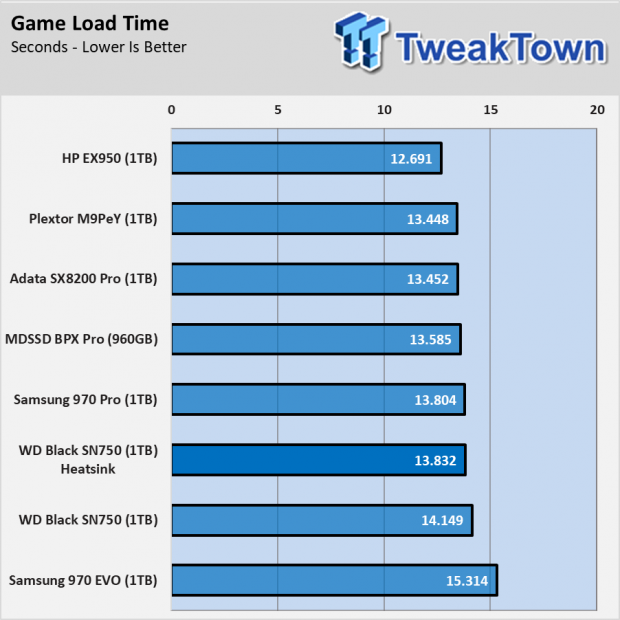 The Game Load Time test comes from the Final Fantasy: Stormblood game. The WD Black SN750 with a heat sink does load the game slightly faster than the non-heat sink version. 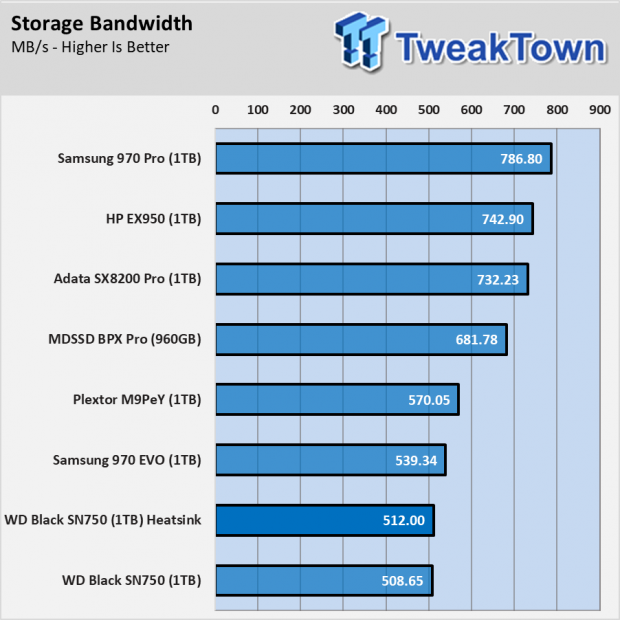 PCMark 8 uses a wider variety of applications to determine disk performance. The WD Black SN750 1TB with a heat sink performs slightly better than the non-heat sink version under these consumer-focused workloads. 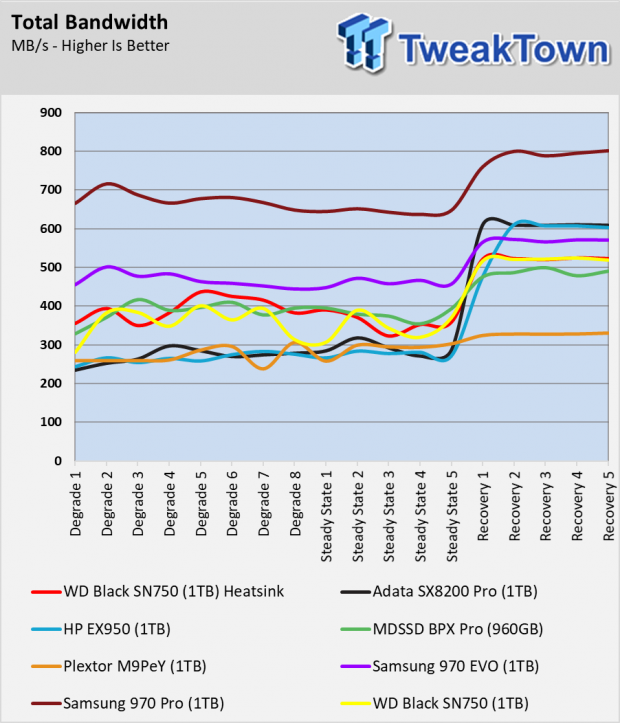 The PCMark 8 Extended Storage Test uses the same consumer applications but preconditions the storage media first with a heavy workout to force a steady-state condition. The first several iterations of the test run nonstop. The drives have to perform cleanup operations while also serving the IO to the system.

The recovery phase pauses the workload for five minutes between each test to allow the drive to perform cleanup operations without system IO. The recovery phases are what we usually look at for consumer SSDs, but in this case, we want to see if the heat sink allows the Black SN750 to work better under heavy workloads.

The heat sink model does outperform the non-heat sink model through most of the heavy phases on the extended test. The heat sink allows the drive to perform more consistently. There is a small difference in the recovery phases where the drives can cool off after performing the background cleanup operations. 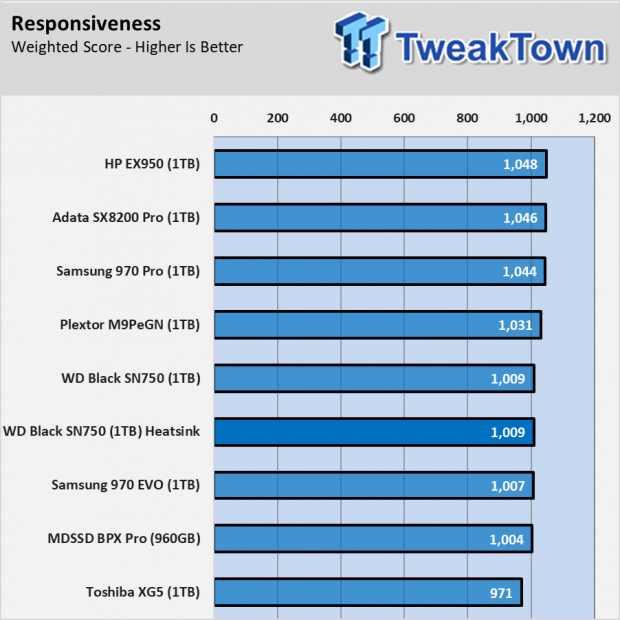 The Responsiveness Test runs in a Lenovo Ideapad Y700-17 gaming notebook like the battery life test below. Surprisingly, this system provides enough room for the heat sink, but very few modern notebooks do. 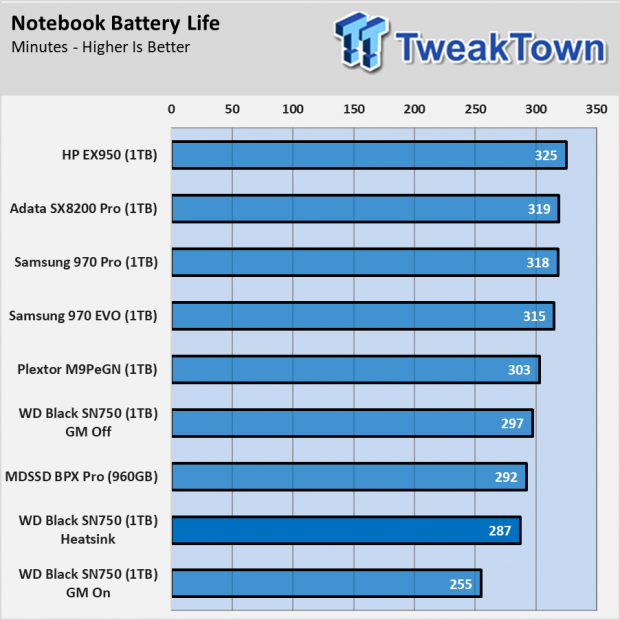 The test suite uses real applications, but the workload focuses on office tasks. It's not a workstation level workload by any means.

The heat sink version of the WD Black SN750 can be a better option for some users, and for many others, it's just a way to spend more money to get similar performance. A number of factors that come into play including the type of workloads you run, where the drive is in your system, and the airflow in the area. 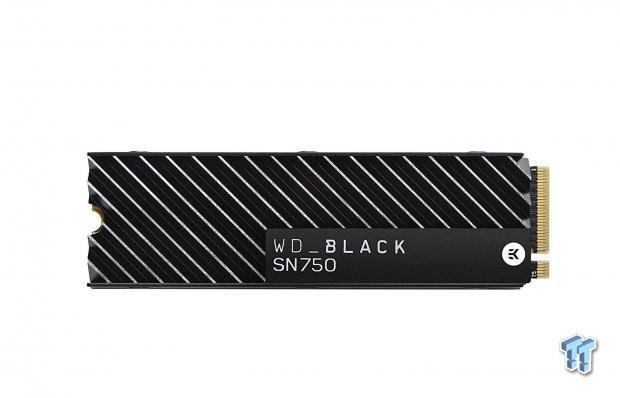 The most common place to install an M.2 SSD is possibly the worst location imaginable, under the video card nestled between two PCIe slots. The video card, and the two PCIe slots, block airflow and even hold the warm air captive. The heat sink on the Black SN750 protrudes above the PCIe slots. This allows some of the system's natural airflow to skim the heat sink and remove more heat than possible with a bare M.2 SSD in stagnant air.

In the 1TB sizes we tested today, you spend around $20 more for the heat sink version Black SN750. This is slightly more than the cost of an M.2 EK Heatsink sold on Amazon, but that aftermarket model doesn't look as good as the WD Black SN750 version.