A Realtek ALC1220 audio codec is used in conjunction with an ESS Sabre 9018Q2C, and Nichicon audio capacitors. Rear USB 3.1 comes from an ASMedia ASM3142 along with an ASM1543 switch that controls the type-C port. There is another ASM3142 used for the internal USB 3.1 header. The Nuvoton NCT6796D is the main SuperIO. Two 128Mbit BIOS ROMs are used for redundancy. Two chips labeled TPU help with fan control and other unique features such as the OC features on the motherboard. An AURA chip facilitates the RGB LEDs on the motherboard and headers. The SMT32F is used to control the OLED display in the IO cover. 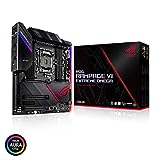