We recently published a review of Lexar's flagship NVMe SSD. The drive came up short in comparison to other premium NVMe SSDs shipping today but the NS200, a SATA model, rivals the best SATA SSDs available. 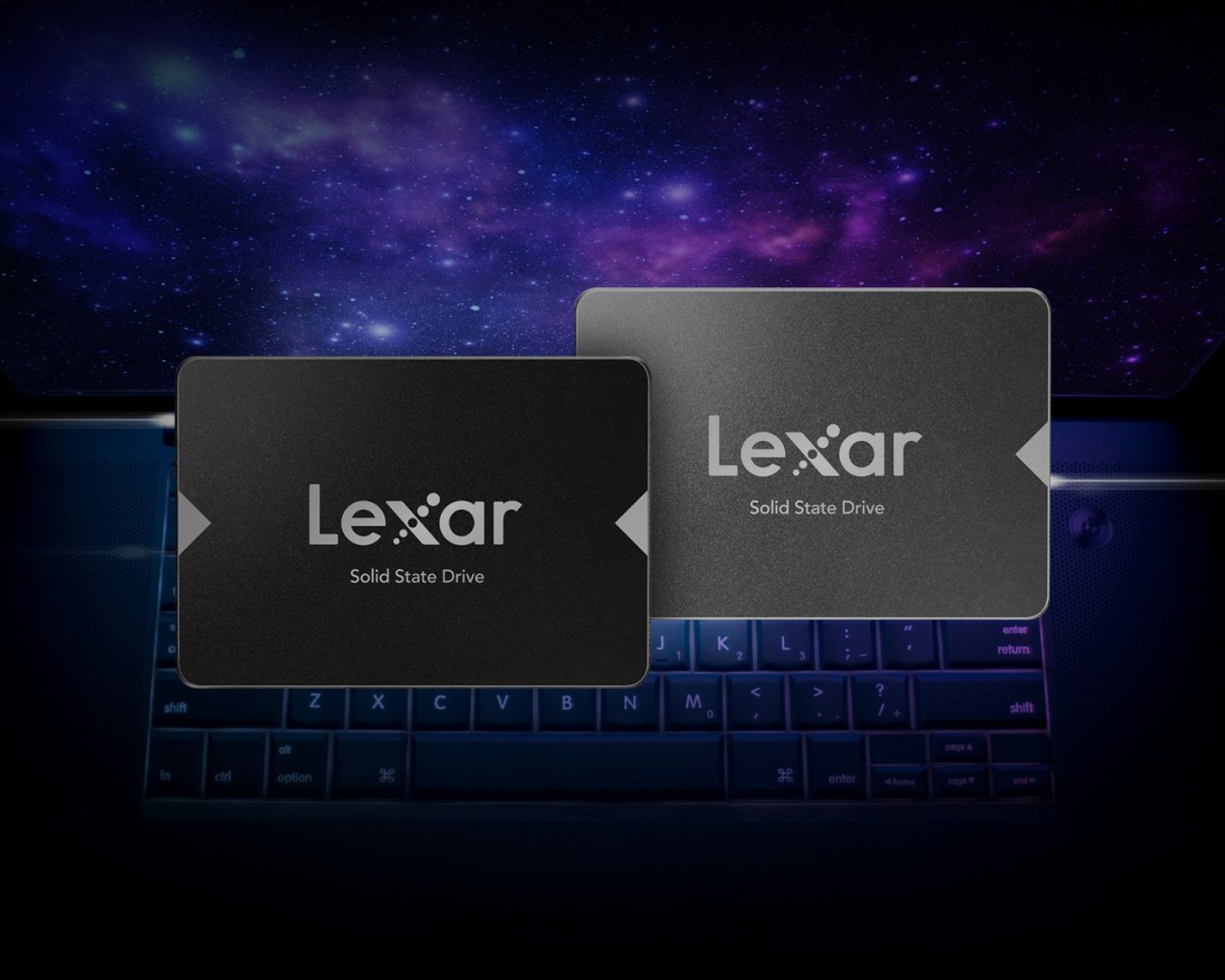 Lexar used to be part of memory giant Micron but was sold off to China-based manufacturing powerhouse Longsys. Longsys will use the popular Lexar name to continue selling memory products in the US and other territories. For shoppers, Lexar still holds the same reputation for reliability as Longsys is a well-respected manufacturer with a 20-year history, and experience, in memory products.

The NS200 SATA SSD uses Micron's 64-layer TLC memory and pairs it with the Silicon Motion, Inc SM2258 controller. The drive is very similar to the Crucial MX500 and that's a very good thing for shoppers. The MX500 with the same memory and controller combination is one of the fastest SATA SSDs shipping today. Lexar hopes to use a same winning formula to join the high-performance club.

Pricing at the time of writing shows the Lexar NS200 slightly higher than the Crucial MX500. The 240GB NS200 starts at just $49.99 and that more than doubles for the 480GB NS200, currently selling for $104.99. The 960GB model sells for $199.99. These are essentially launch day MSRP prices, this series hasn't dropped since coming to market and that's not a good thing in this environment where prices seem to decrease every few days. 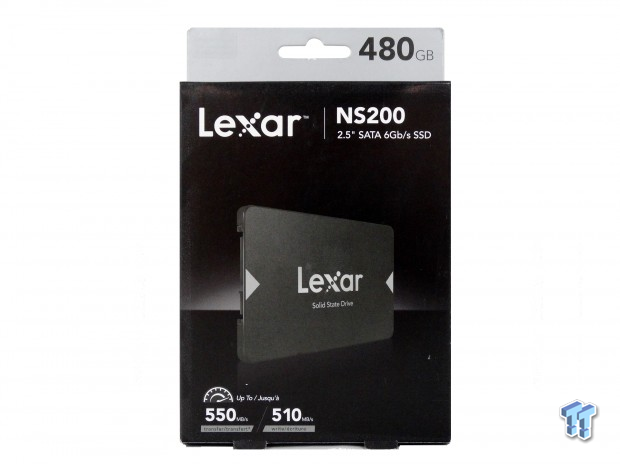 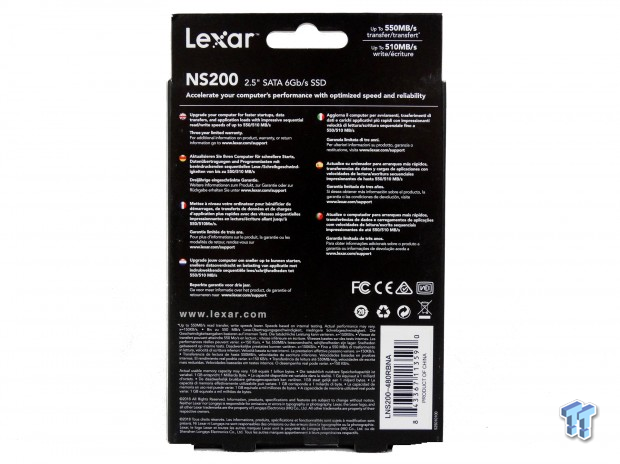 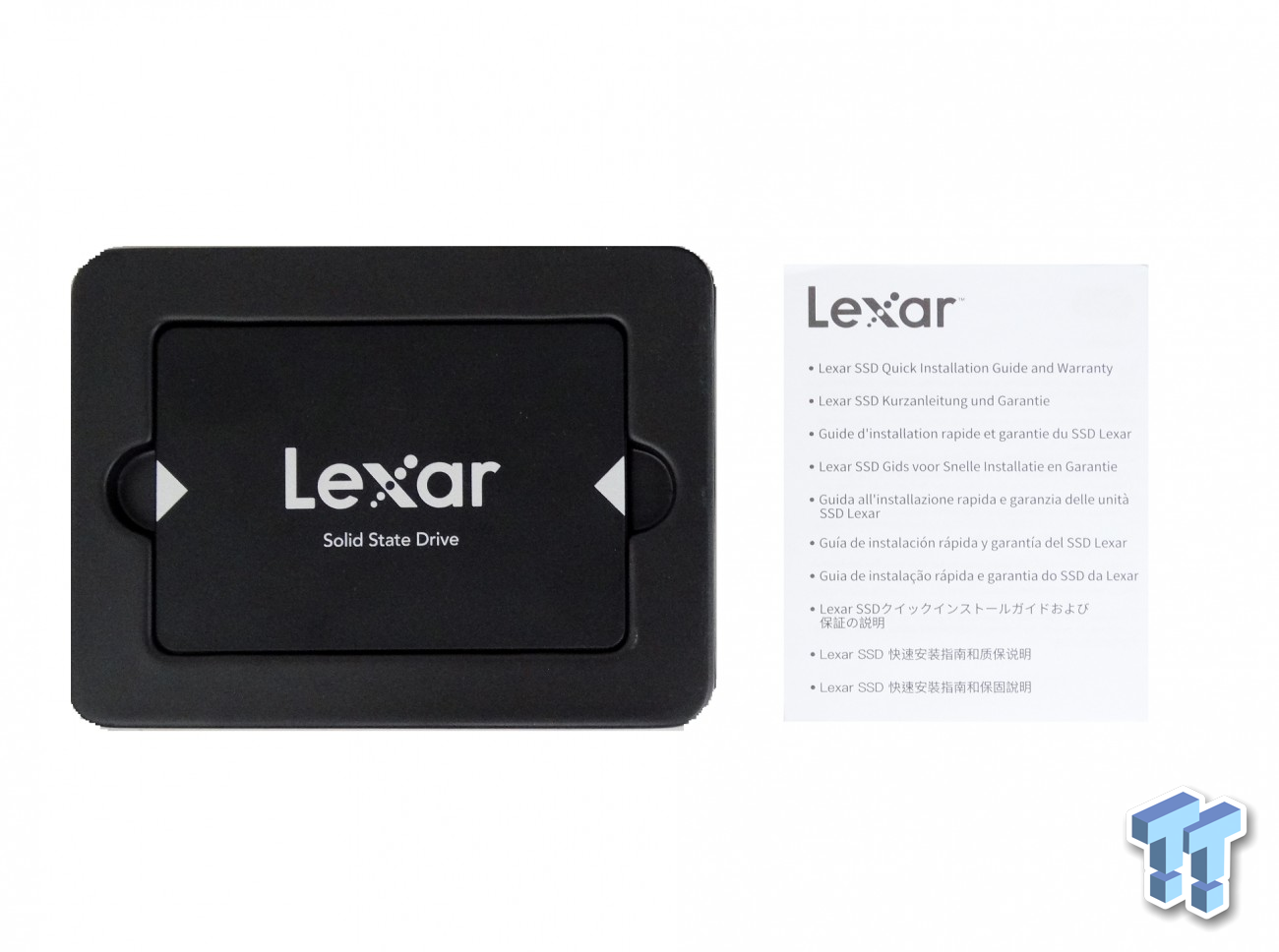 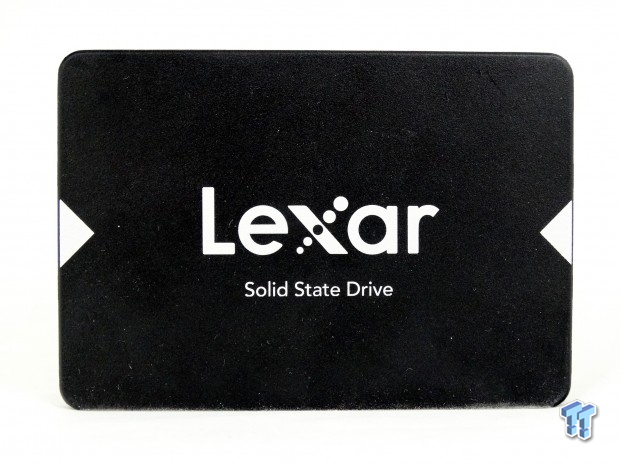 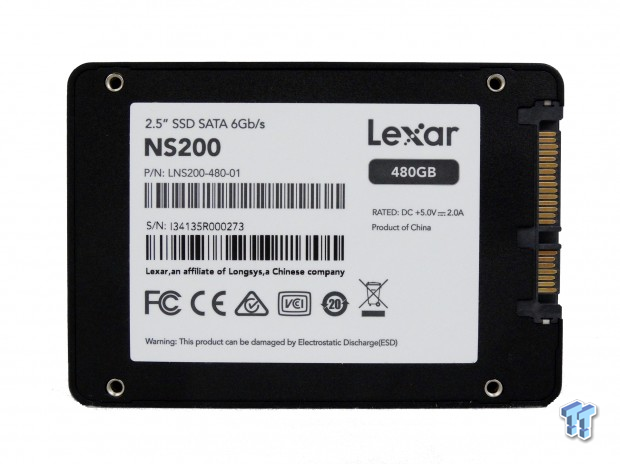 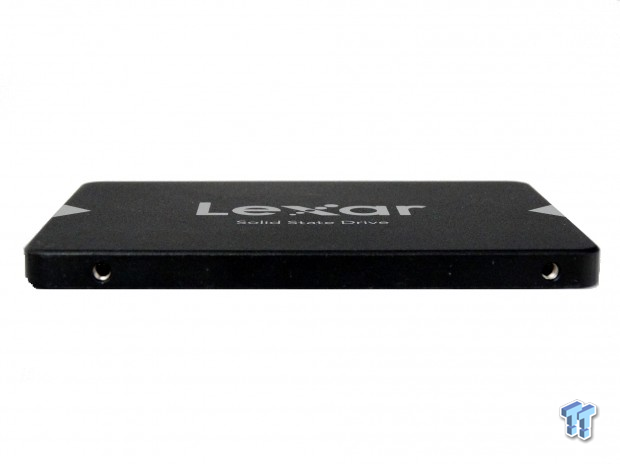 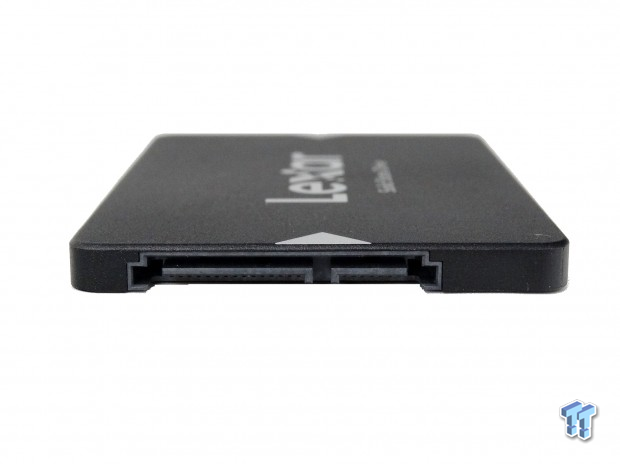 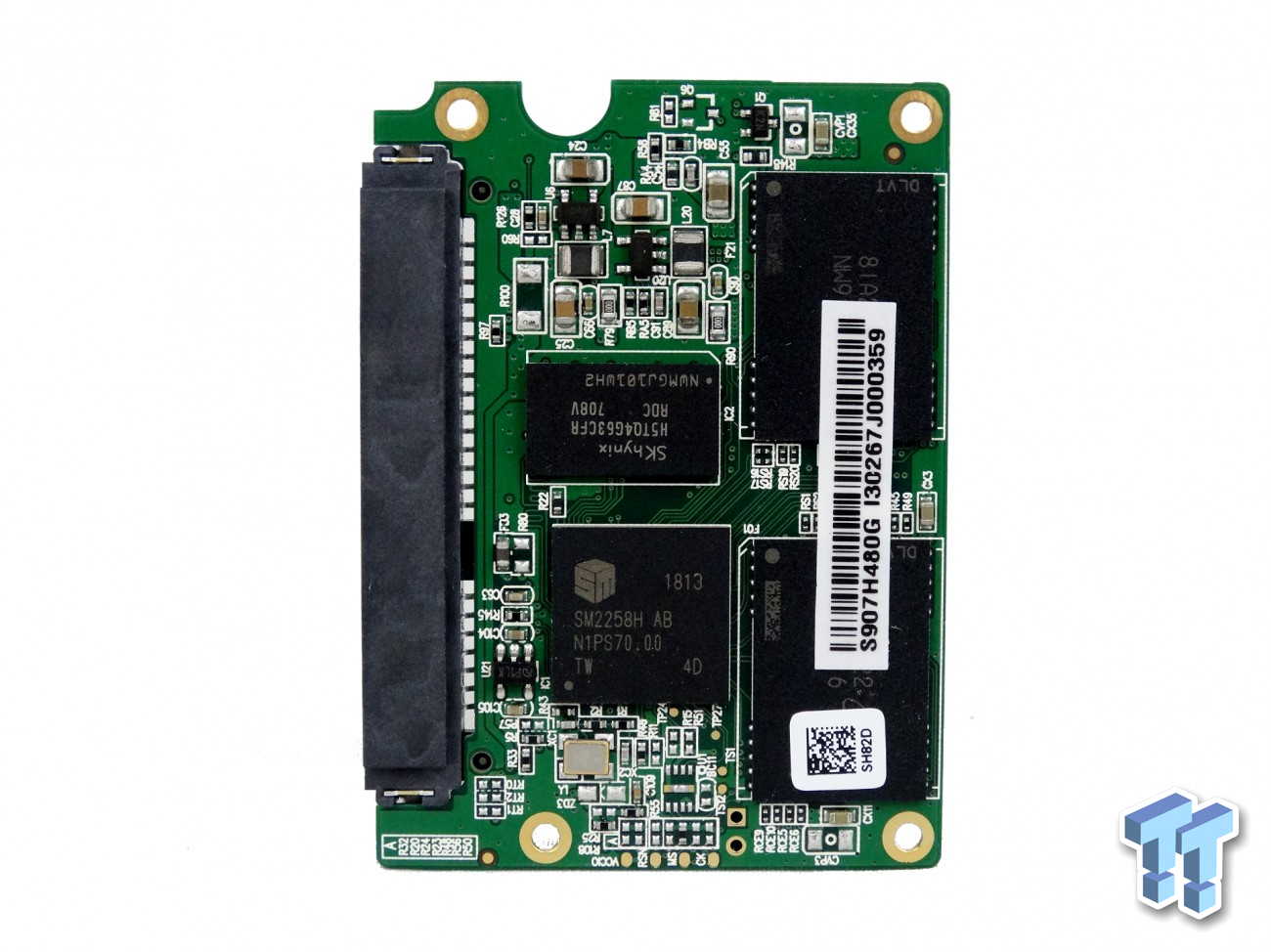 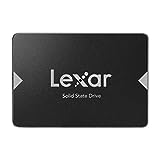 We pulled a wide range of 512GB class SATA SSDs to compare to the new Lexar NS200. The drive's most obvious competition is the popular MX500 and seemingly timeless 860 EVO. 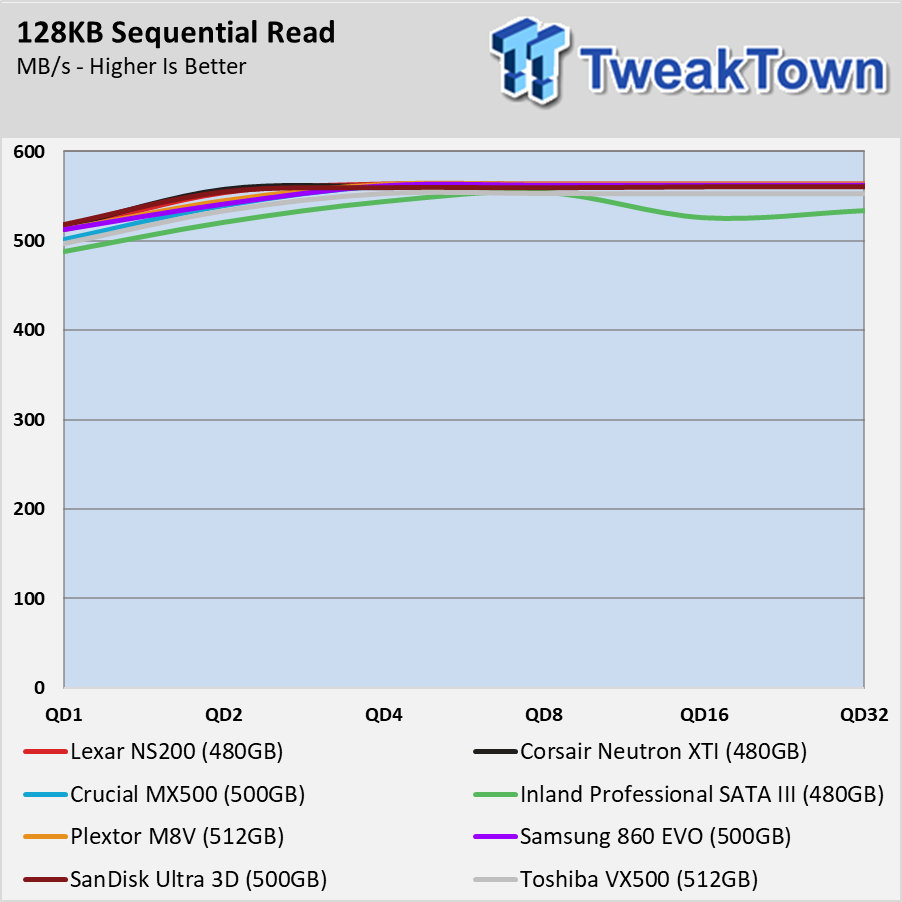 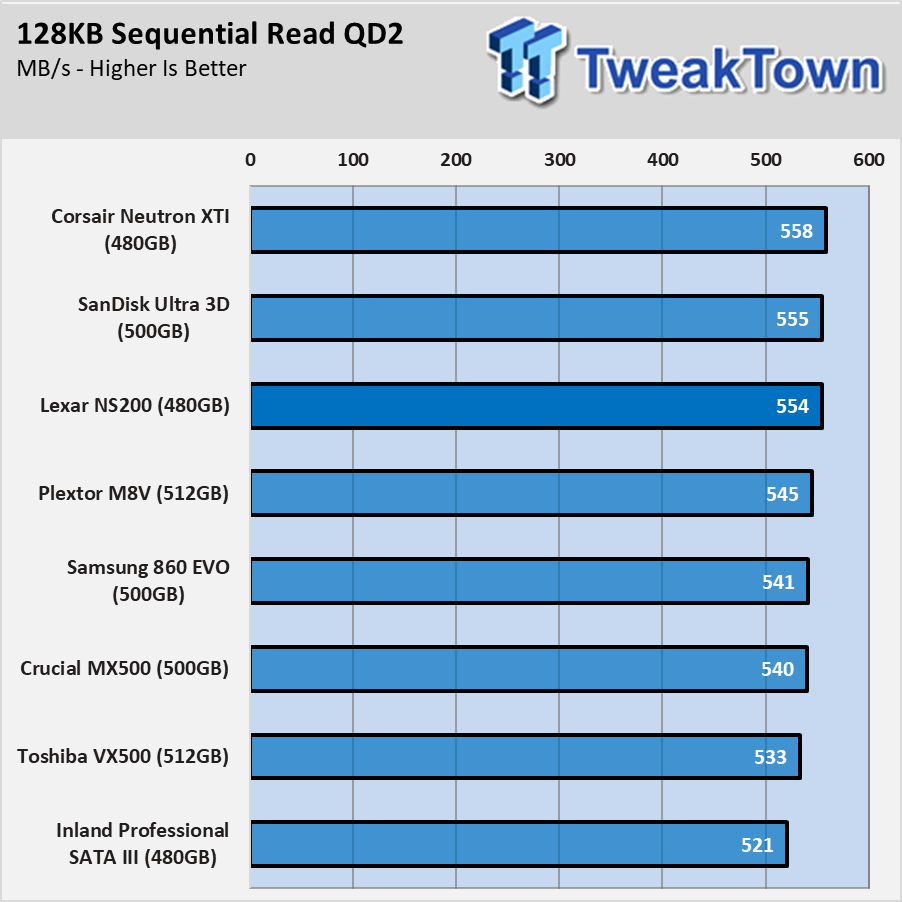 Top SATA SSD speeds have topped out long ago so in the first two tests we don't see a lot of variation between the drives. 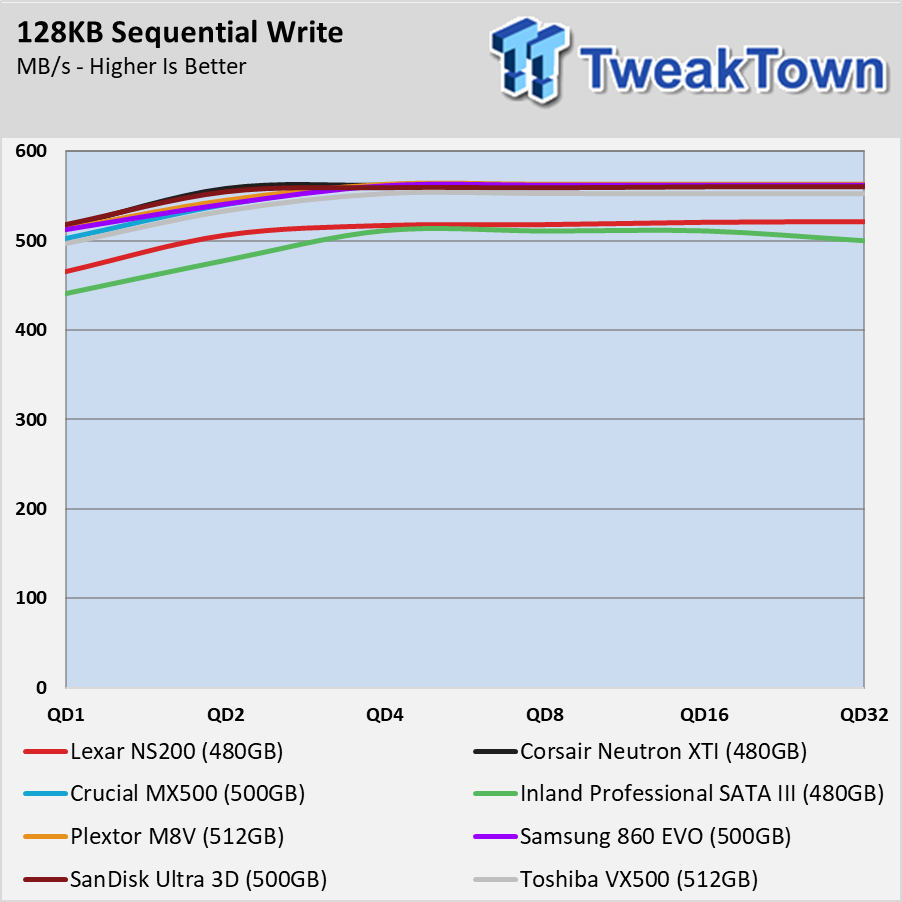 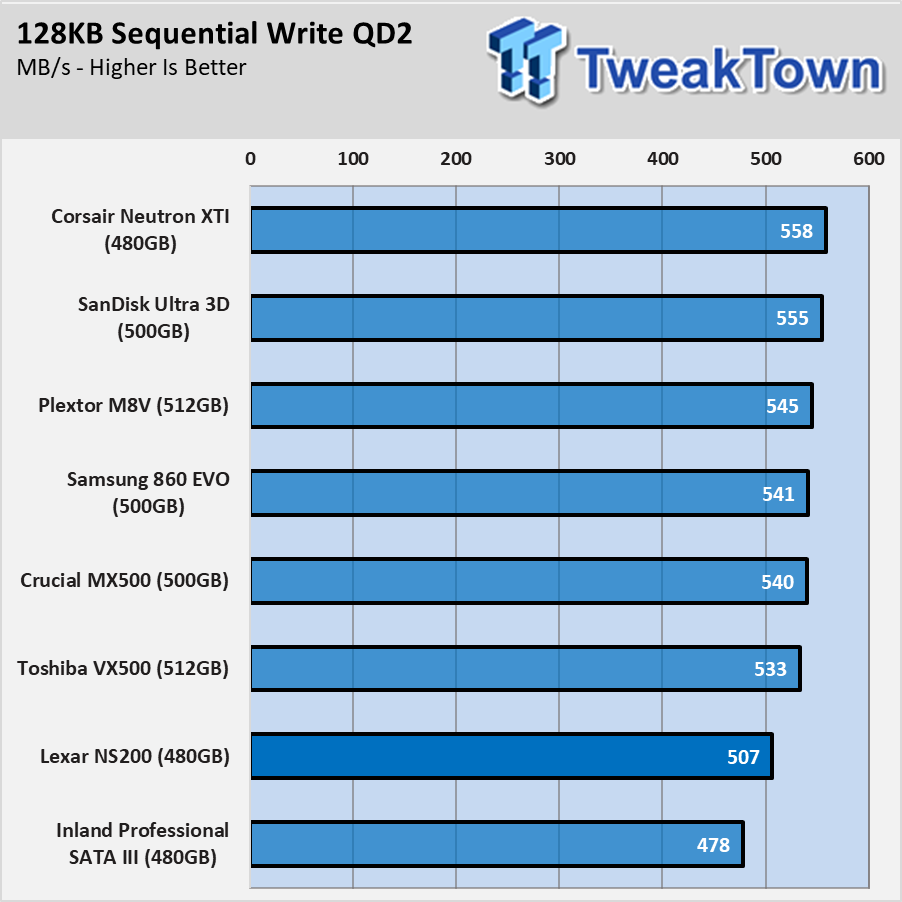 There is a bit more in the write tests but for the most part, the sequential write performance is within 10%, and most users wouldn't notice the difference transferring data. 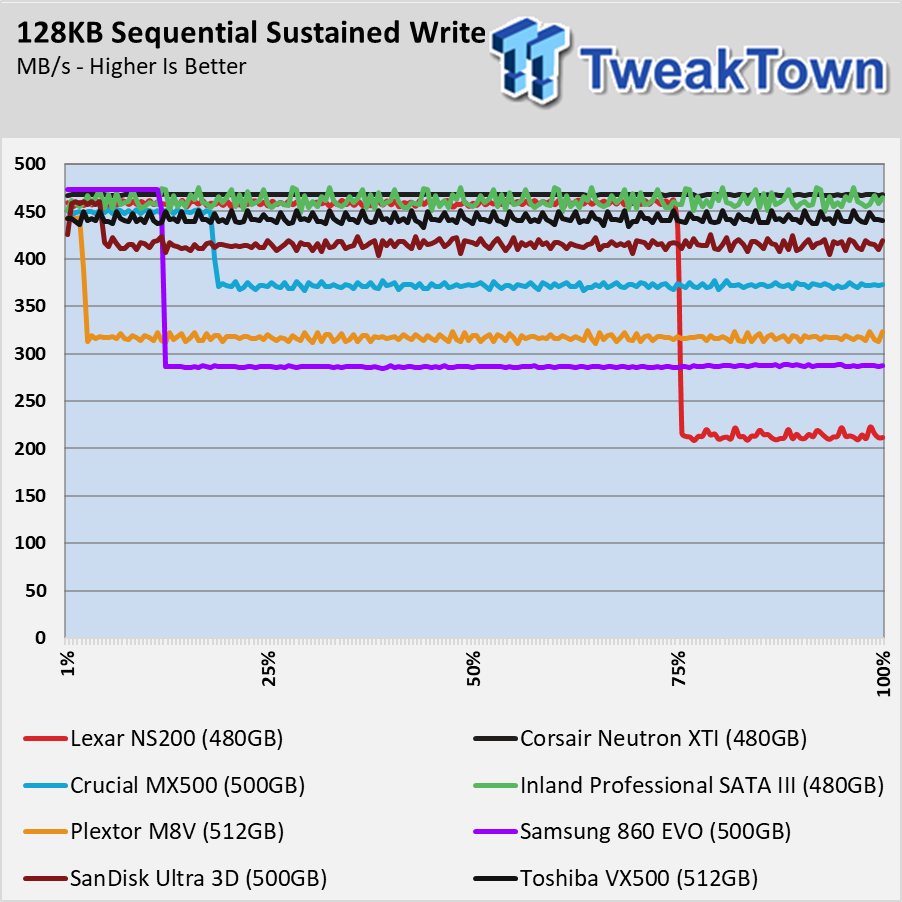 Writing a lot of data to the drives allows us to further separate the products by performance. The Lexar NS200 performs really well in this test and meets the best SATA SSDs at the top for most of the user capacity. The NS200 does show the largest drop in performance after the SLC buffer fills. 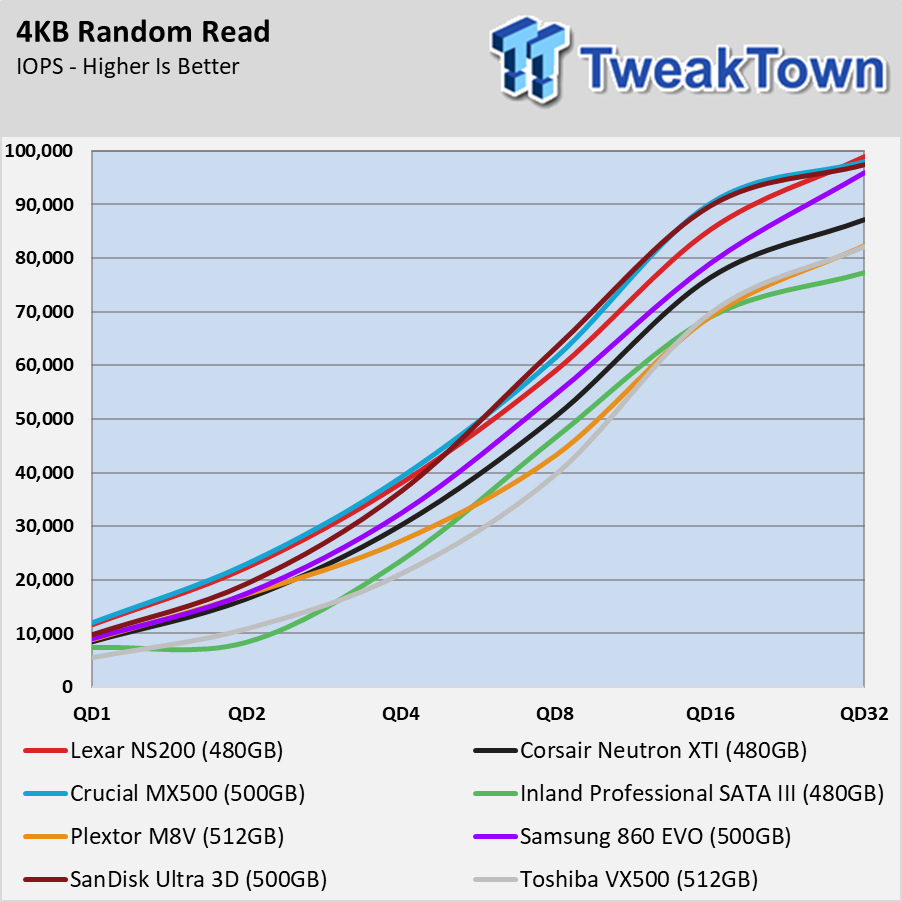 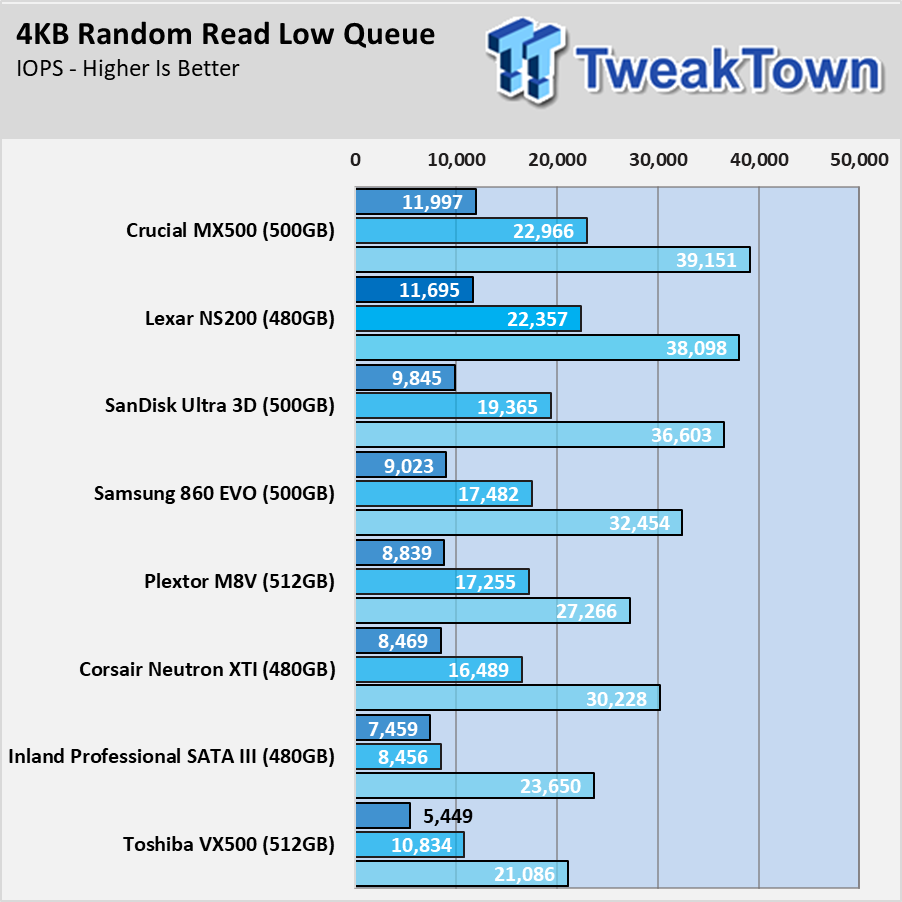 The low queue depth random read performance is what we wanted to see most of all in the early synthetic testing. This is what makes a drive feel fast in your PC and where the SMI SM2258 with Micron 64L TLC dominates the SATA SSD industry. 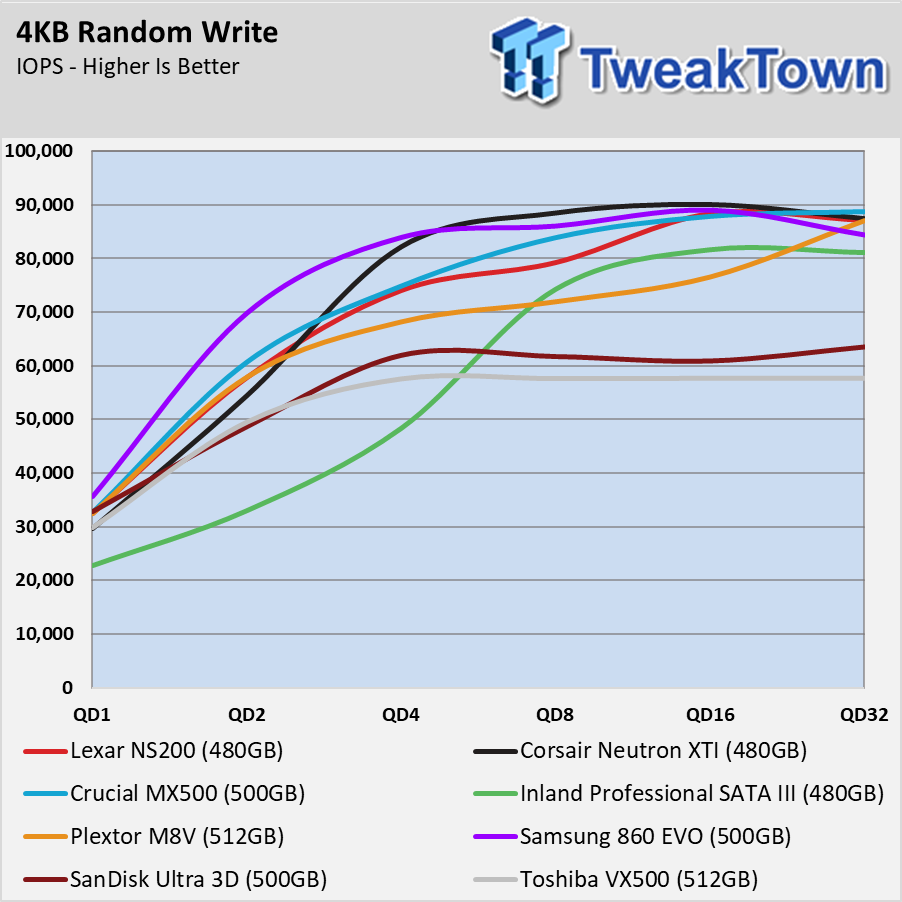 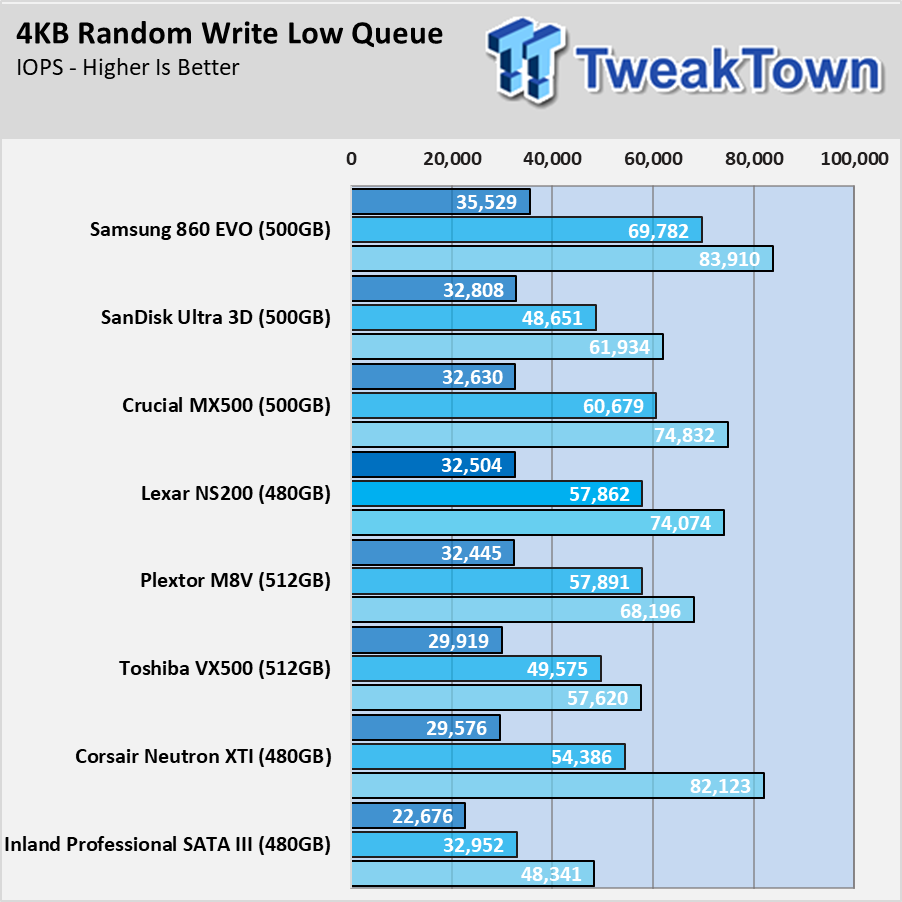 The random performance similarities don't stop with the reads. The NS200 random write performance curve is nearly identical to the MX500's. 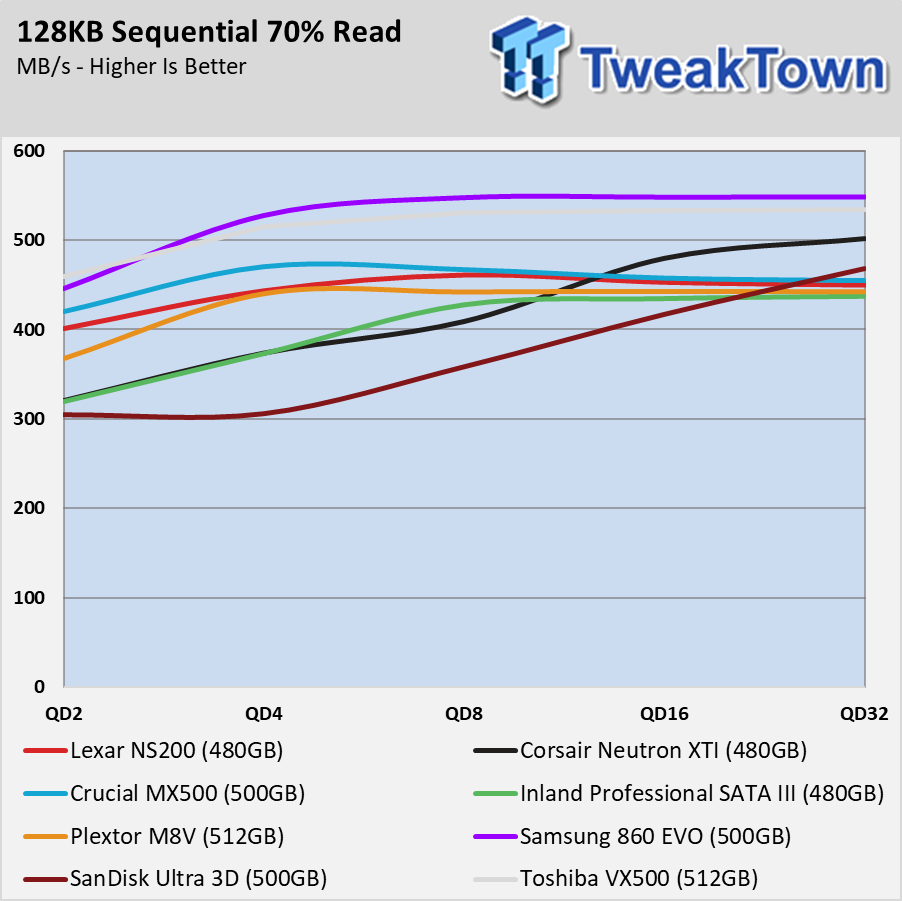 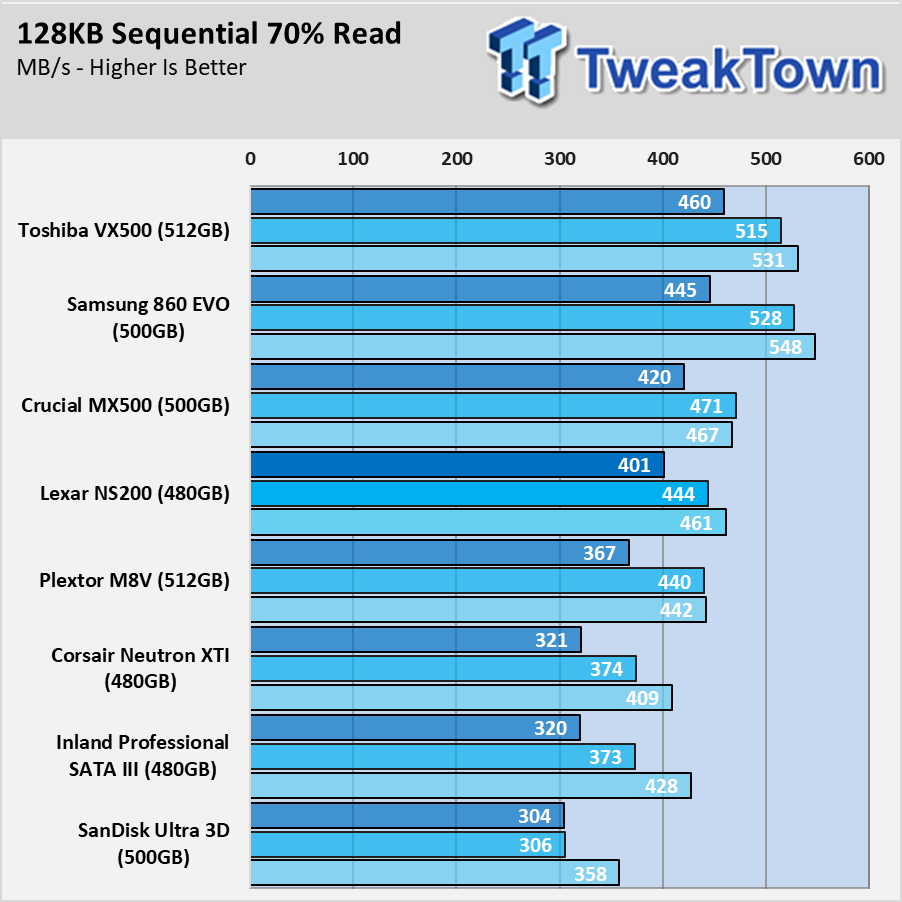 We see the most separation between the products in performance when mixing reads and writes in our test. The 70% read workload is the industry standard test and leans closer to workstation workloads.

The Lexar NS200 performs well in this test but can't muster the high sequential peaks provided by the Samsung 860 EVO and Toshiba VX500. 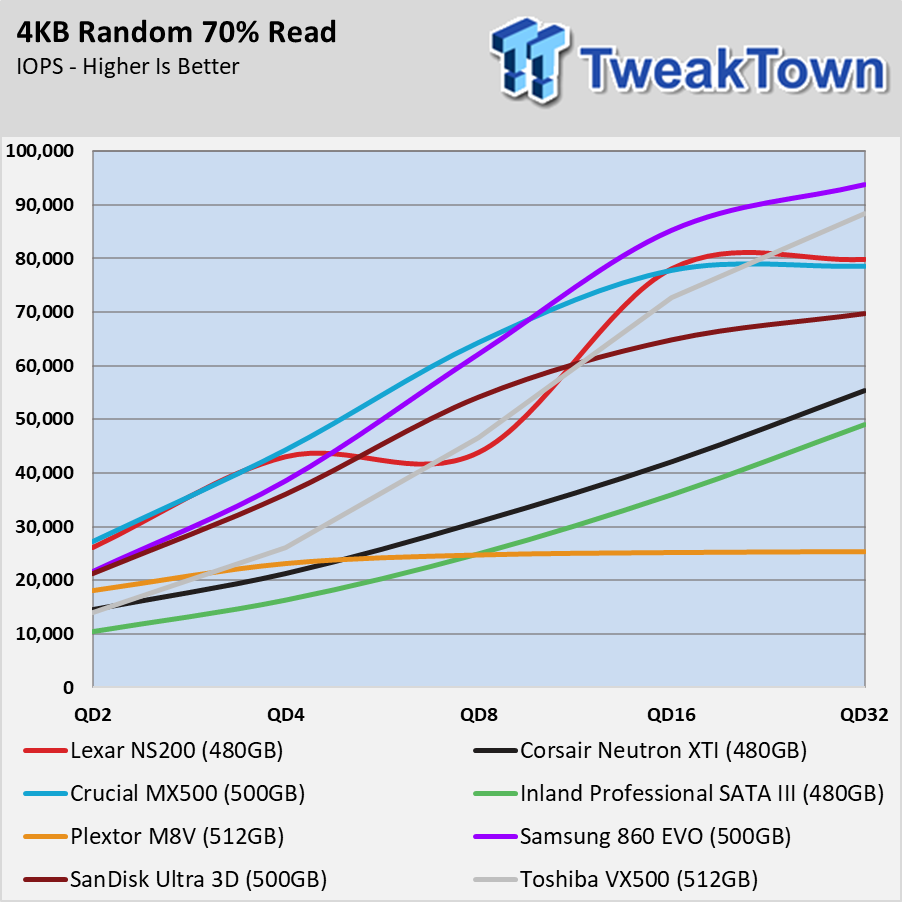 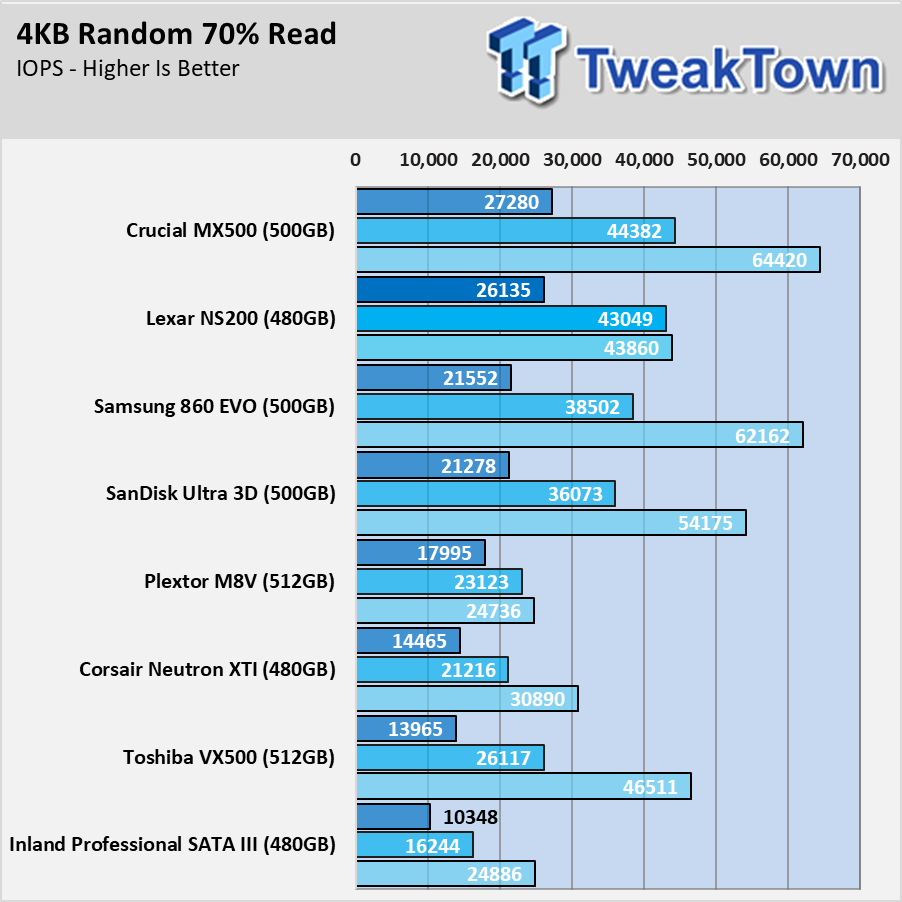 Moving over to random mixed data, the NS200 again joins the MX500 away from the other products at low queue depths. 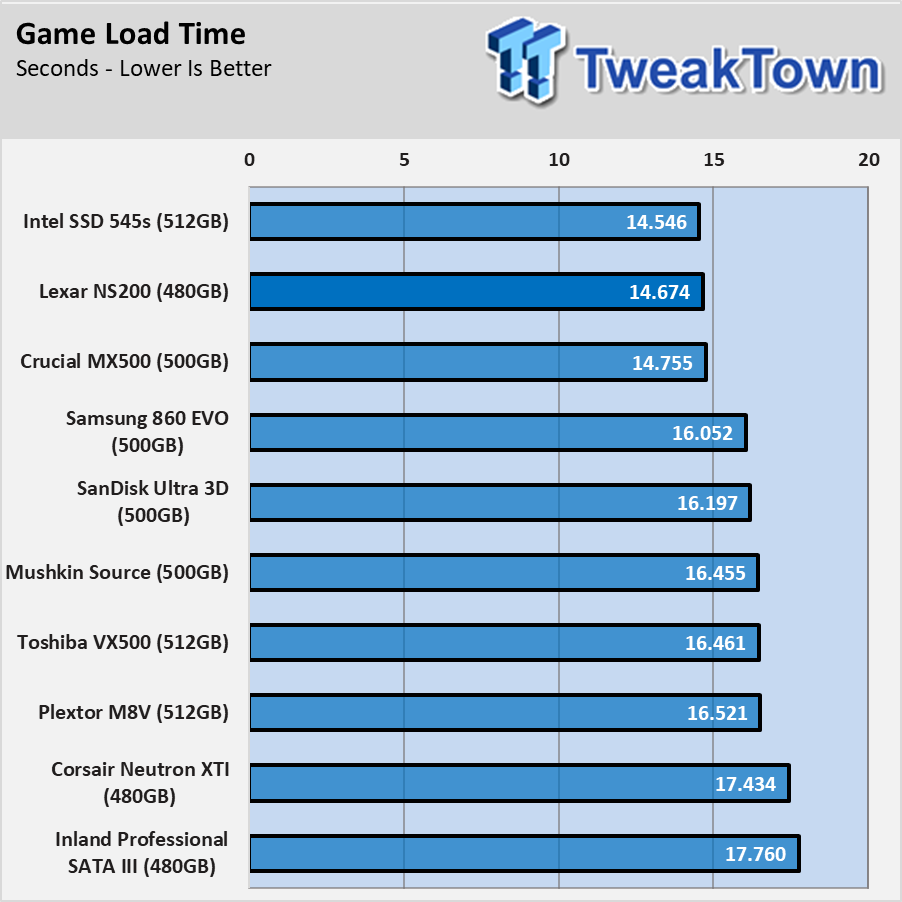 In our synthetic testing on the previous page, the 480GB Lexar NS200 never outperformed the 500GB Crucial MX500. Moving over to real-world applications, we start with the Final Fantasy: Stormblood test. The NS200 manages to claw past the MX500 by nearly a tenth of a second. It's not a massive win, but it's still a "W" none the less. 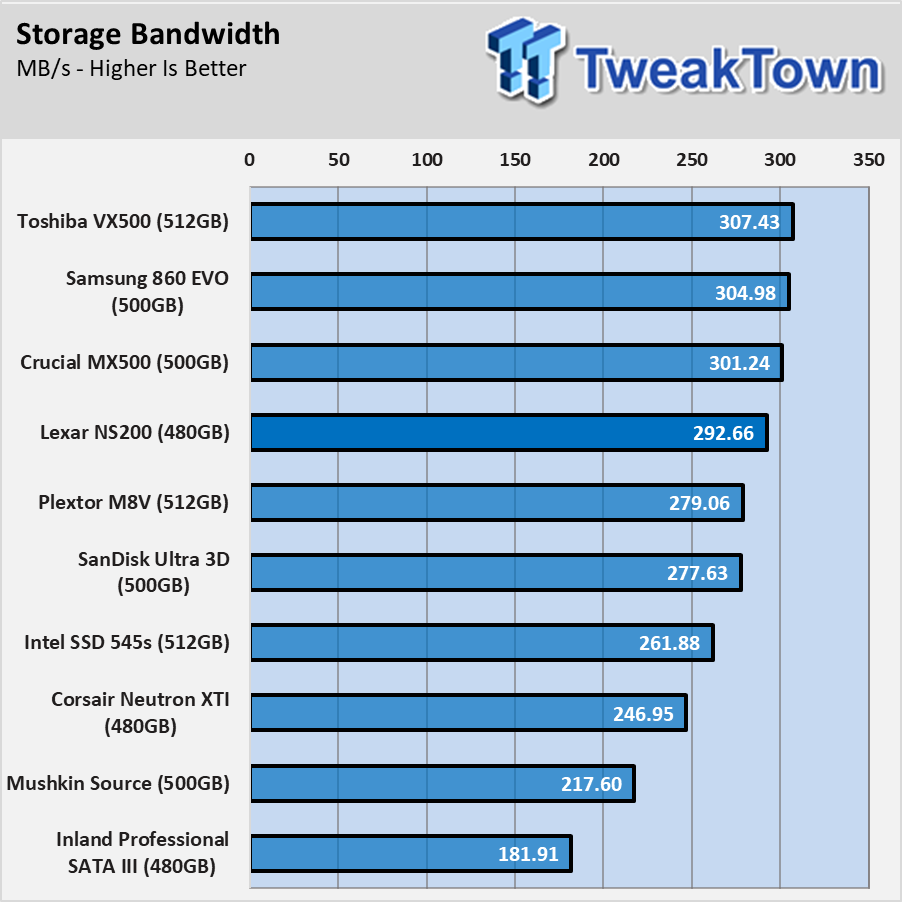 The UL PCMark 8 Storage Test uses a more diverse list of applications to measure performance. This is one of, if not the best storage test for general use application suites from Microsoft and Adobe.

The 480GB Lexar NS200 performs well with general applications that most of us use every day. The drive does trail the less expensive 500GB MX500 but still delivers respectable throughput. 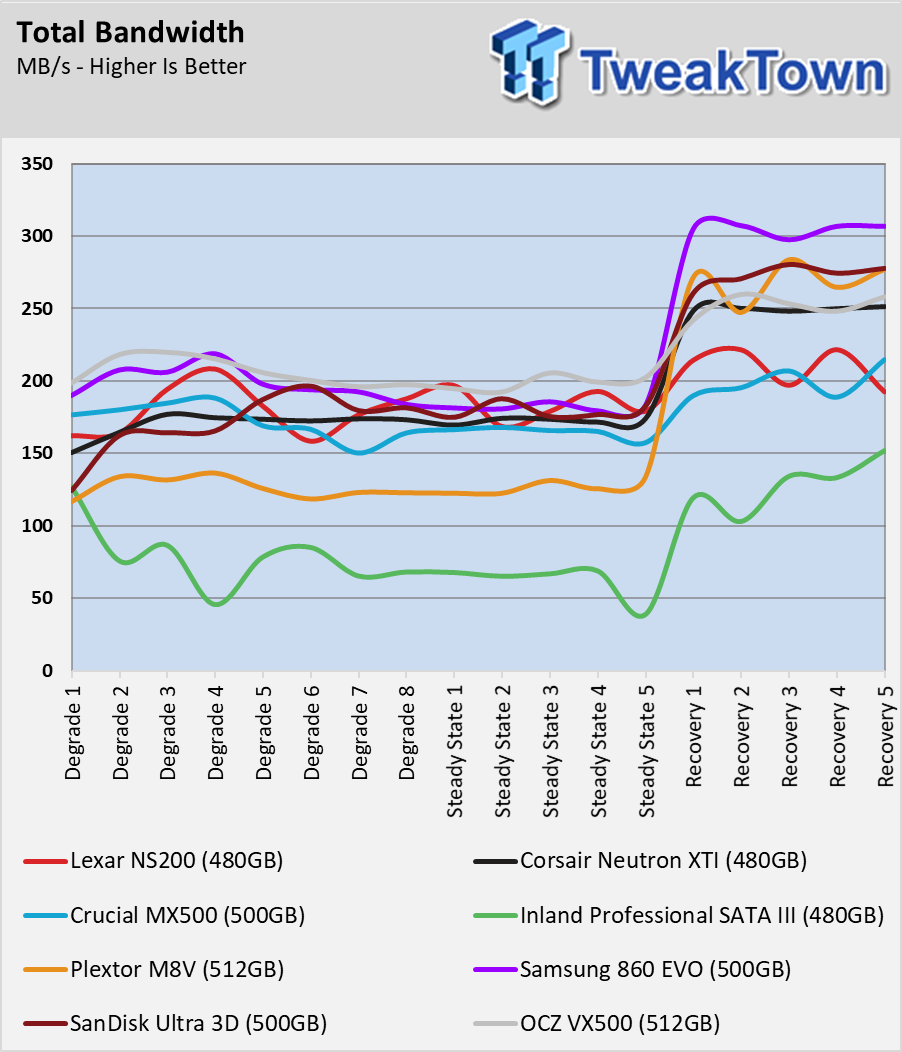 The UL PCMark 8 Extended Storage Test runs the same applications as the previous test, but starts with the drives in steady-state. With consumer SSDs, we focus on the recovery phases where the drives sit idle for 5-minutes to perform background cleanup operations. The increased overprovisioning on the NS200 over the MX500 allows the drive to perform a little better under heavier workloads. It also allows the drive to recover a little faster. 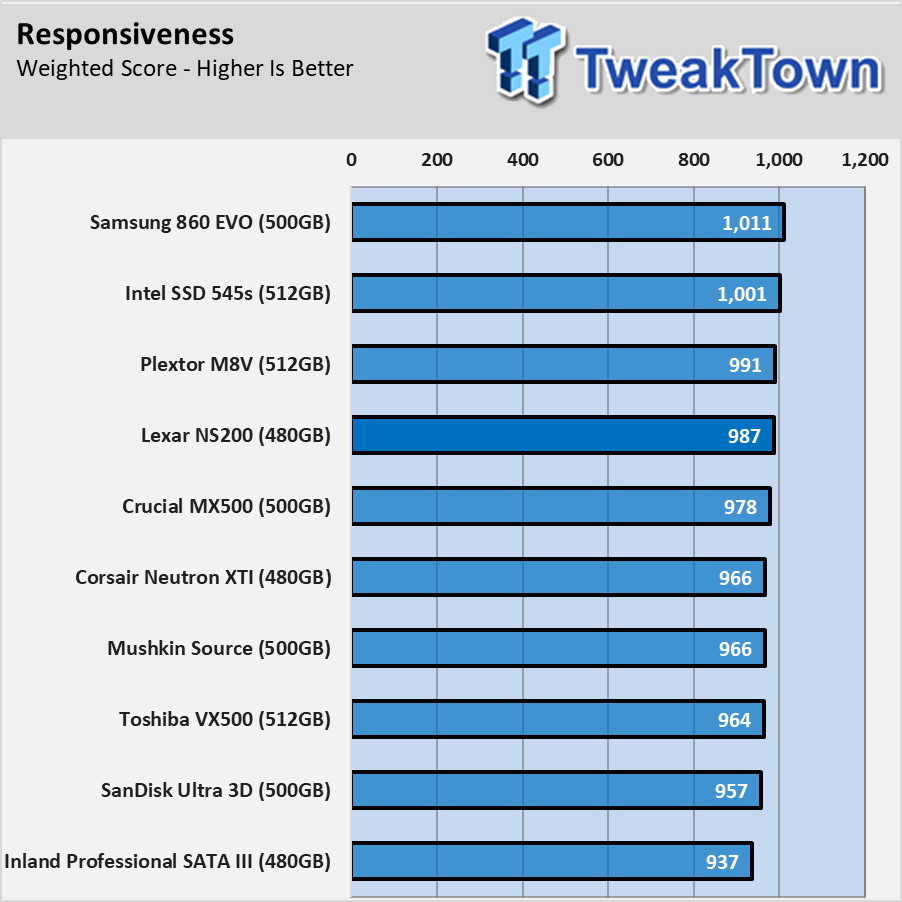 Another great storage test tool comes from BAPCo in the form of SYSmark. The 2014 SE release brings a storage test to the suite that measures overall system responsiveness. When you use the same system and just change the storage, this becomes a powerful tool to measure storage performance. The suite uses real applications in a simulated day working in an office for several hours.

The NS200 again leads the MX500 in the test thanks to the increased overprovisioning that increases performance under heavy workloads. 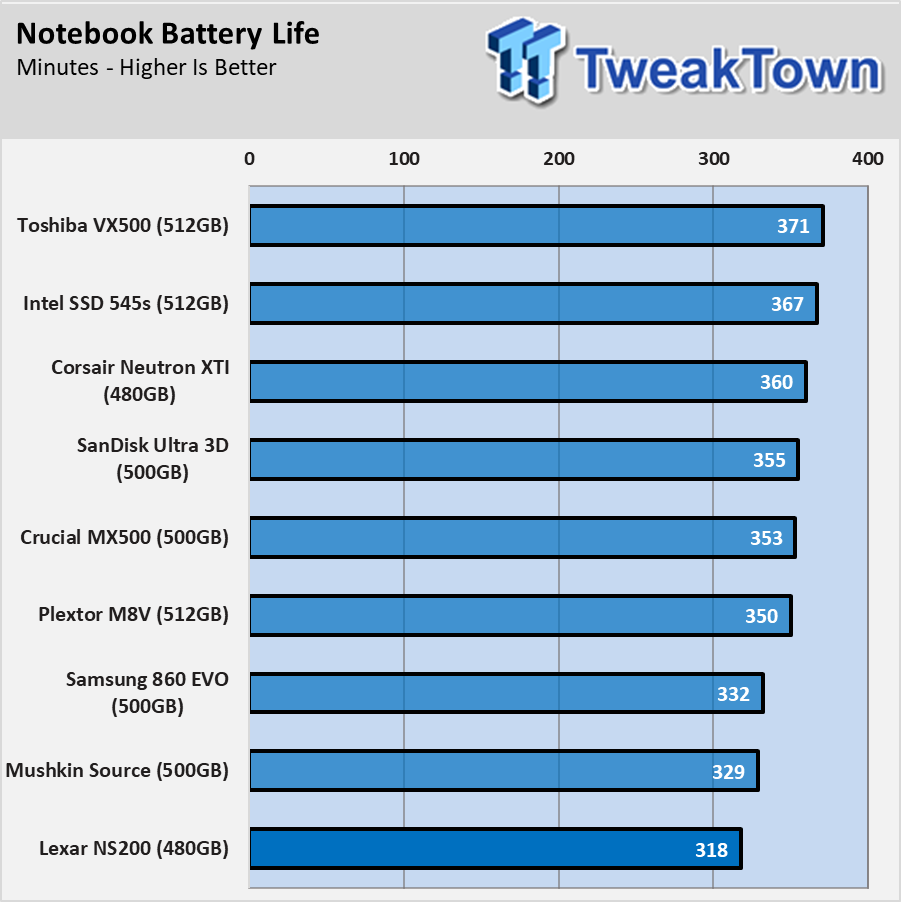 The only area where the Lexar NS200 appears in weak in our testing is in notebook use on battery power. The drive delivered over 5 hours of "on" time running office applications. It's a strong score in a gaming notebook designed for performance and not business use, but it's far less time compared to many of the other SATA SSDS shipping today.

The Lexar brand comes at a difficult time for SSD manufacturers. It's a great time to buy SSDs, but that is only because datacenters, enterprise, and mainstream consumers are not. There are a number of factors why but that doesn't really matter here today since the storage side isn't the root cause.

Lexar has to contend with being the new name in the consumer SSD space. Samsung, Crucial, even Corsair have long histories here, but most shoppers still see Lexar as the camera media company. When it comes to product comparisons, there are really only two SATA SSDs at the top of shopper's lists, the Samsung 860 EVO, and Crucial MX500. The 500GB 860 EVO sells for $79.99 at Amazon, and we often ignore it now that Crucial ships the $69.95 500GB MX500 shipping. The Lexar NS200 is very similar to the MX500 and the two tiptoe over one another in performance tests.

Since the first pass on this article, the 480GB NS200 price has dropped to $83.82, but the other capacities have stayed the same as we reported. The 500GB 860 EVO is clearly a better drive in almost every way, but it still costs less than the NS200. Lexar has a pricing issue, but it's one that may correct itself over time as more of these drives make it to market.

The Lexar NS200 is a solid product and a very good SSD. It's not the best, and because of that, we need to see the price reflect it's market position before we can recommend it.

The Lexar NS200 follows the tried and true formula of the Crucial MX500 but currently costs more than the superior Samsung 860 EVO.