Overall VRM thermal performance is excellent, but remember these are results at stock settings, not a 4.7GHz 9980XE. We see solid thermal distribution, and the active fan and heat sinks do seem to help cool the VRM and PCB. We see a 2C increase on the front and a 4C increase on the rear of the PCB. Overall excellent, but do keep air flow over the VRM area in your mind if heavily overclocking the 9980XE. 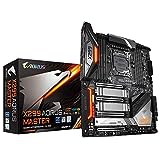