These VRM results are excellent, we have great performance, with a slight change in VRM performance from idle to load on the front and only a slight one on the rear. Overall, these results are some of the most excellent we have seen. 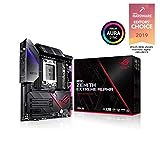