All systems will act differently, so I will look for commonalities, such as how far from the VRM the heat spreads through the PCB and the difference in temperature between the front side and back side of the PCB. Keep in mind, the majority of the heat from the VRM goes into the PCB as it is a giant soldered on copper heat sink. A lower temperature on the front of the PCB points towards a more effective heat sink. Thermal performance is pretty good, we see the heat spread more than go up, but we can see a hot spot, but the good news is that it's under the heat sink and not part of the 33% of the CPU VCore VRM not under the heat sink. Anything under 60C is great, 60-80C is acceptable, and anything above 80C is a bit worrisome (if at stock). 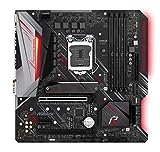