The Maximus XI Formula has excellent VRM thermal performance. While it's not the best we have seen, that is mostly due to the fact that it's using a waterblock as a VRM heat sink, but regardless, the thermals were acceptable, and temperature rises weren't bad. Anything under 60C is great, 60-80C is acceptable, and anything above 80C is a bit worrisome (if at stock). 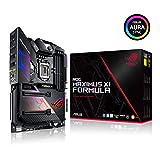