The Aero 15 Y9 series is the first notebook in the world to feature Microsoft's Azure AI system. Now, some people might be scratching their heads thinking, "what is that?". Well, simply put it figures out what you are doing and then optimized your notebooks power and other resources to do that thing well. If you play a game it will divert power to the CPU and GPU in accordance with how taxing that game is on either.

If you are doing something CPU intensive like editing images in photoshop, it will reduce GPU power consumption and increase CPU power limits. If you are playing a game, it will also detect which game it is and assign an RGB LED layout for your keyboard to match the game. If you are on your battery, it will reduce power consumption of both the CPU and GPU to increase battery life. We saw it do these things, and we saw that having it on actually increased performance over having it off. We will be fully investigating it in the coming weeks.

GIGABYTE and Microsoft require you to agree to this GDPR agreement. The notebook has one program where everything is located, it's called GIGABYTE Control Center and you can access everything from there. GIGABYTE's Manager allow you to control things like Pantone or disable WIFI. Fusion is obviously where keyboard lighting control comes from. You can also customize the fan curve.

The BIOS is pretty basic, not too much to see. 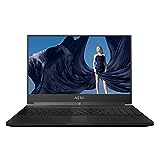